Gordon Allport was a world-renowned and highly influential scholar in understanding the factors influencing personality, motivation, and psychological health. This lesson will help you get to know Allport, his contributions to psychology, and his general theories of personality development. 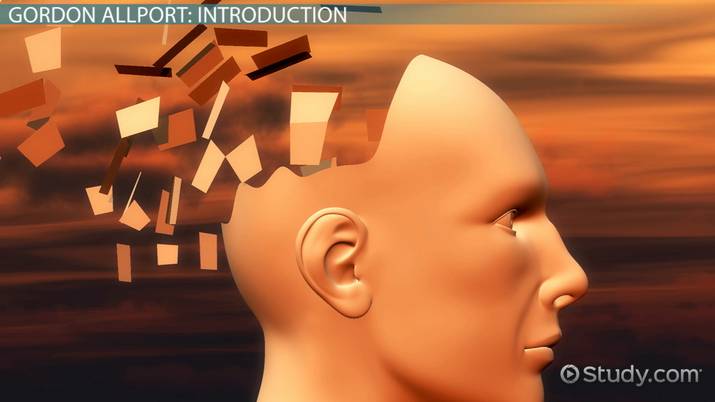 Gordon Allport was born in Montezuma, Indiana, on November 11, 1897. He was raised by his biological parents, John Edwards and Nellie Edith, along with four older brothers. They were practicing Protestants. Allport's mother worked as a school teacher, and his father a country doctor. Due to his father's strong work ethic and dedication to his patients, Allport's childhood home was converted into a makeshift hospital. Patients and nurses roamed freely throughout the home. His father's appreciation of and dedication to science and health likely influenced Allport to be a pioneer in psychology and personality theory.

Allport easily shared his father's spirit for hard work, as he was an early entrepreneur. When Allport was a teenager, he owned his own printing business and was editor of the school paper. Despite these extracurricular commitments, Allport graduated second in his class and earned a scholarship to the highly prestigious Harvard University.

Allport initially struggled adjusting to the cultural differences and academic challenges of Harvard. Instead of earning top grades as he had done in high school, he was managing Cs and Ds. However, as Allport became more comfortable at Harvard, he again began to excel in his studies. His hard work earned him two bachelor's degrees, economics and philosophy, in 1919.

After earning his bachelor's degrees, Allport spent time teaching Sociology in Istanbul, Turkey. When he returned, he was influenced by his older brother to study psychology. He continued on at Harvard to earn his master's degree in 1921 and his Ph.D. in 1922, both in psychology.

In 1924, Allport began teaching in the Department of Social Ethics at Harvard. He developed and taught the first ever psychology course on personality. Shortly thereafter, he also taught social psychology and personality courses at Dartmouth College. Due to his contributions to psychology, he quickly climbed the ranks as a professor at Harvard. He earned the title of Assistant Professor in Psychology in 1930. He was promoted to Associate Professor in 1937. Then Allport earned Full Professor of Psychology in 1943. He held this position until his death in 1967. During his tenure at Harvard, he also contributed to scholarly activities at Cambridge University, the University of Berlin, and University of Hamburg.

In addition to teaching, Allport was heavily involved in the care of refugee scholars displaced by WWII. Several of his scholars would continue on to become influential leaders in the field of psychology. Allport was also very active in the psychology community. In 1937, he was the president of the national organization for all psychologists, the American Psychological Association. He was also the president of the Eastern Psychological Association in 1943.

Allport passed away shortly after receiving these high honors. He died on October 9, 1967, in Cambridge, Massachusetts, of lung cancer.

One of Gordon Allport's most significant contributions to psychology was his theory on personality traits, known as trait theory. According to trait theory, your personality is made up of several traits. Traits are enduring personal characteristics, which are resistant to change. These traits shape your thoughts, feelings, and actions. Allport believed these traits, which shape personality, are divided into three categories:

First, we have cardinal traits, which are relatively rare traits that tend to dominate your personality. They are so pronounced that you might even be known for this specific trait.

Here's an example: Jake is the cheapest person you've ever met. He takes extra condiments and napkins from fast food joints so that he doesn't have to spend his own money on them at home. He re-washes ziplock bags and aluminum foil so he can re-use them. The neighborhood joke is when Jake passes, he'll ask to split a grave with someone else, so he only has to pay half price.

Next, we have central traits, which are the main traits that form your personality. They are generally the way we describe each other's basic personality characteristic.

Here's our example for our central traits: Janet tends to be shy and reserved. She often keeps her feelings and thoughts to herself unless asked for her opinion. When she does speak, she is considerate of other's feelings. Others describe her as quiet and kind.

Here's an example for that: Jerry hates public speaking. He can talk your ear off over lunch, but if you put him in front of a crowd, he freezes.

A world-renowned and highly influential scholar and psychologist in understanding personality, motivation, and psychological health, Gordon Allport came from a hard working family dedicated to helping others. His father was a physician and his mother was a school teacher. His upbringing clearly influenced his prestigious career as one of the highest revered psychologists, earning his degrees from Harvard University and working for both Harvard and many other schools, including Dartmouth College. Throughout his graduate education and career, he was widely regarded as an expert in the field of personality and even served as president of the American Association of Psychologists, the national organization representing psychologists.