Graham v. Connor was a Supreme Court case that established the legal use of physical force by law enforcement on suspects. Learn about the incident, summary, and court decision of Graham v. Connor. Updated: 10/15/2021
Create an account

Dethorne Graham didn't commit a crime, but his 1984 encounter with police officers left him with a broken foot, hurt shoulder, bruised forehead, and other injuries. So, what happened? Did the officers break the law? What are the rules regarding a police officer's use of force? Let's take a look at when an officer can legally use physical power on a suspect, and how much power can be used.

Graham was a diabetic and felt he was having an insulin reaction. Graham asked his friend, Berry, to drive him to a convenience store so that Graham could buy orange juice. Graham, like many diabetics, felt the sugar in the juice would counteract his reaction. Graham hurried into the convenience store but quickly exited because he saw that the checkout line was long. He got back in Berry's car, and the two left.

Charlotte Police Officer Connor was observing from across the street and thought Graham's actions were suspicious. The way Graham hurried in and out of the store made Connor think the two might be engaged in criminal behavior, such as stealing from the store.

Officer Connor followed Graham and Berry's car, pulling them over just a couple blocks from the store. Berry explained Graham's health situation, but Officer Connor felt the situation needed further investigation. He instructed Berry and Graham to stay in their car while he sent another officer back to the store to determine what had happened. However, Graham began acting strangely. He exited the car and ran around it twice, before sitting down on the curb and briefly passing out.

Backup officers arrived and, thinking Graham was drunk, handcuffed him. The officers forced Graham onto the car's hood, and then head first into the back seat of a police car. Though Graham regained consciousness and a friend arrived with the orange juice, the officers refused to give it to Graham. The officers also refused to check Graham's wallet for an emblem he insisted would prove he was diabetic.

Finally, the officer returned from the store to report that nothing had happened there. The officers drove Graham home and released him. 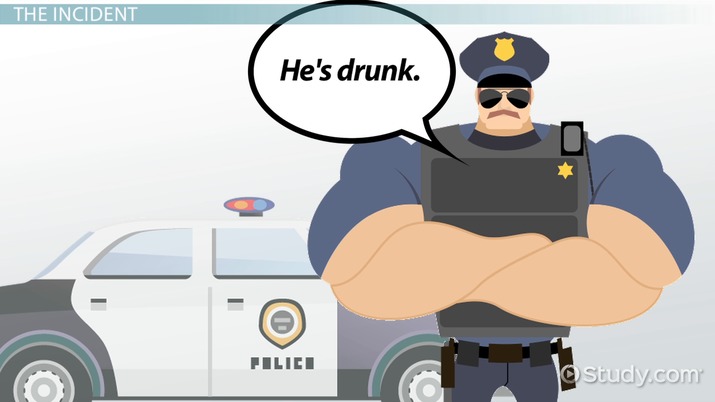 Graham then sued the officers for civil rights violations. His case was dismissed, because the court felt the officers had not acted 'maliciously and sadistically' in an attempt to injure Graham or violate his rights. Notice how the court applied a subjective standard, in that they judged whether or not Officer Connor and the other officers involved meant to, or tried to, injure Graham.

Graham then petitioned to have his case reviewed by the United States Supreme Court. The Court accepted his case and remanded the case, meaning they sent it back to the lower court, to be reconsidered. This time, the Supreme Court directed the lower court to use an objective standard. The test needed to be neutral and impartial, rather than based on the officers' actual thoughts and intentions.

The Supreme Court set a new standard that has since determined when, and to what extent, an officer can legally use force. Through the 1989 Graham decision, the Court established the objective reasonableness standard. This 'reasonableness' test is based on the Fourth Amendment guarantee against unreasonable search or seizure.

The Court stated that, the 'reasonableness' of a particular use of force must be judged from the perspective of a reasonable officer on the scene, rather than with the 20/20 vision of hindsight.

There are a number of factors courts should consider when applying the reasonableness test:

However, notice that the reasonableness test does not consider:

Instead, the test considers the situation from the view of a reasonable officer currently experiencing the situation.

In the Graham case, we'll never know. After the Supreme Court sent the case back to the lower court, the parties settled the case.

The 1989 Supreme Court decision in Graham v. Connor established an objective reasonableness standard for when an officer can legally use force on a suspect and how much force can be used. The test is whether or not a reasonable officer on the scene, faced with the same circumstances, would use the same physical force.

However, courts should not consider: