First, what is a quadratic inequality? Well, the word quadratic tells us that we will have an x^2 term and that 2 will be our highest exponent. We might have an x term as well as a constant term, but these aren't required for quadratics. The inequality tells us that we are dealing with a function that may not be exactly equal. So we are dealing with greater than, less than, etc.

I've written these in standard form, where a, b, and c stand for numbers. But remember that for a quadratic, the only term that must be there is the first x^2 term. What does this mean? It means that while b and c can be 0, essentially deleting those terms, a must be a number and cannot be 0. If we plug in random numbers, we can see how a quadratic inequality will look.

We see that we can have one term, or two, or all three. But the one term that has to stay is the x^2 term. 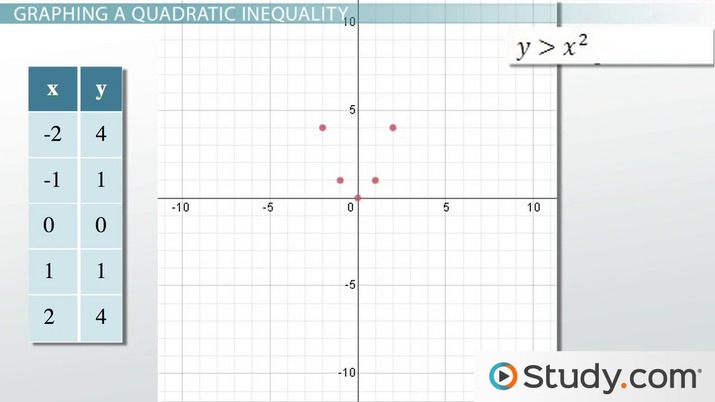 Coming up next: How to Multiply and Divide Rational Expressions

When you have only one function, a solution only needs to satisfy that one function, but for a system, the solution must satisfy all the functions in the system. In math, we have a special notation for systems. We use a big curly bracket in front of the system like this:

As with other quadratics, we can either punch this function into a graphing calculator or make a table with points to plot. What I'm going to do is make a table with points. I'm going to choose the x values and calculate the y values using the x values. The x values I'm going to choose are -2, -1, 0, 1, and 2. To find each point, I plug in my x value wherever I see an x and then calculate to find my y. So, the first point is y = (-2)^2 = 4, which means my point is (-2, 4). I do this for each point to get a complete table.

I plot these points on a graph to get my curve.

Also, because we are dealing with inequalities, we are going to shade a portion of the graph. Do I shade above or below the line? Let's think about it. The sign is greater than, so that means I need the part whose y values are greater than the y values of my line. I pick a point on the line, any point to see. I pick the point (1, 1). I ask myself which direction I need to go to get bigger y values. It's up. I need to go up, so that means I need to shade the part of the graph that is above the line.

I'm done graphing this function. Now I can move on to the rest.

Graphing the System of Quadratic Inequalities

Because I am dealing with a system of quadratic inequalities, I will be graphing everything on the same graph. I'm going to make a table for the points for the second and third equation in my system.

My symbol is less than or equal to, so that means my line is solid. I am shading the part that is under the line because these are the y values that are less than my line.

I've drawn two of my inequalities on the graph so far, and I see that there is a part of the graph where my shading overlaps. This is the area where the solutions work for both of these inequalities. What will happen when I draw the third inequality on the graph? Let's see. I'm going to make a table for the points for my third and final inequality.

Because these points get me barely past the point where the graph curves, I'm going to add another point just to see how the curve curves.

My symbol is less than, so my line is dashed and I shade the part that is under my line.

The solution to my system is the area where all my shading overlaps. So it is the area that is above the red dashed line, below the solid blue line, and below the dashed green line. All my values inside this region are solutions to my system.

End Behavior of a Function: Rules & Examples | How to Find End Behavior

Transformations of the 1/x Function