In this video lesson, we talk about the graphs of the three other trigonometric functions of cosecant, secant, and cotangent.

How can you remember these? Someone once told me about the phrase 'Co-Co No Go.' This helped me a lot! This helps me to remember that the cosecant goes with the sine and not the cosine. The tangent and cotangent are easy to remember since they share the same word 'tangent.'

So, let's go ahead and start with graphing the cosecant function. 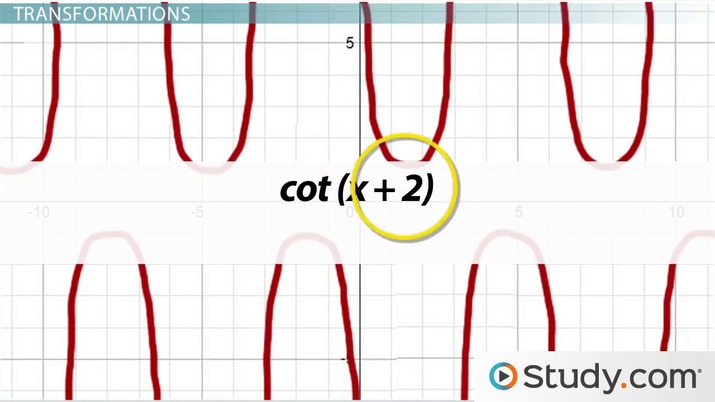 Coming up next: Using Graphs to Determine Trigonometric Identity

Moving on to the secant graph.

Lastly, here is our cotangent graph:

We've covered all our graphs now. Let's talk about shifting our graphs, or transformations. We can easily make our graph move up, down, to the left and right by just adding or subtracting numbers from different areas of our function.

To move our graph up or down, we can simply add or subtract numbers from the end of our function. For example, the function csc (x) + 2 has a shift of 2 spaces up. If we wanted to move the graph down, we would subtract two from the end.

If we multiply our function by a number, it will change how wide the middle part is. For example, in the cosecant and secant function, this number will change how far apart the mounds are to the dips. Larger numbers make the mounds go lower and the dips higher thereby increasing the distance between the two. So, the graph of 4 csc (x) looks like this:

Look at the larger gap between the mounds and the dips. For the cotangent graph, it changes how long it takes for the curve in the middle to happen. So, the graph of 4 cot (x) has a less pronounced curve because it provides more space for the curve to happen:

The secant function has how long of a period?

How to Graph cos(x)