Thomas has taught electronics and communications engineering, math, and physics and has a master's degree in electrical engineering.

What Is a Gravitational Field?

There are two ways of showing the gravitational field around an object: with arrows and with field lines. Both of these are shown in the picture below. Arrows show the magnitude and direction of the force at different points in space. The longer the arrow, the greater the magnitude. Field lines show the direction the force would act on an object placed at that point in space. The magnitude of the field is represented by the spacing of the lines. The closer the lines are to each other, the higher the magnitude. 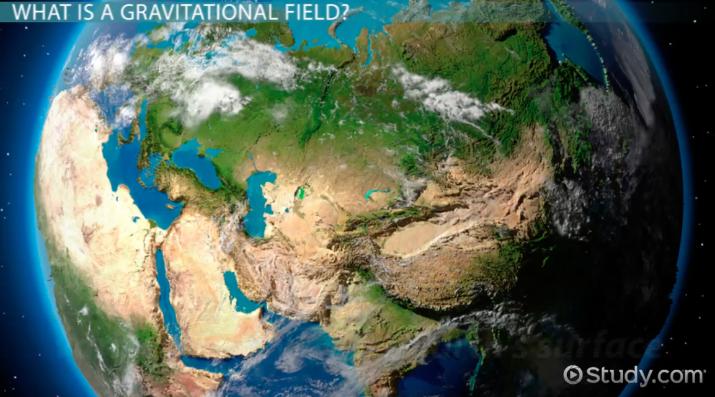 Try it now
Back
Coming up next: Magnetic Poles: Definition & Shifts

The earth and moon exert a force, or pull, on each other even though they are not in contact. In other words, the two bodies interact with one another's gravitational field. Another example is the interaction of the earth and a satellite in orbit around it.

In 1798, English physicist Henry Cavendish performed precise measurements of the actual gravitational forces acting between masses using a torsion balance. The outcome of his experiment resulted in the constant of proportionality in the law of universal gravitation called the universal gravitational constant. Inserting this into the proportionality results in the equation F = G(mM/d^2). The value for G is 6.67 x 10^-11 newton-meters squared per square kilogram (N-m^2/kg^2).

The following is a diagram of the torsion balance set up used by Cavendish to determine the universal gravitational constant.

When we talk about the gravitational force acting on an object, we can come up with an equation in a couple of different ways using the universal law of gravitation and Newton's Second Law of Motion. Newton's Second Law of Motion also describes force and says that an object is accelerated whenever a net external force acts on it. The net force equals the mass of the object times its acceleration. Mathematically, we have F = ma, where F is the force acting on the object, m is the mass of the object, and a is the acceleration of the object.

We can also come up with an alternative equation by setting the universal law of gravitation and Newton's Second Law of Motion equal to each other since they both describe force. Doing this, we have mg = G(mM/d^2). The mass of object 1 cancels out and we are left with g = GM/d^2.

The Kinematics of Simple Harmonic Motion

What is a Mechanical Wave?