In this lesson, you will explore two artistic periods in Greek art that saw the foundations of Greek styles emerge. Then, test your understanding with a brief quiz.
Create an account

The culture of ancient Greece is one we often hear about. The Greeks developed philosophy, math, and government that we still respect today. And art. The Greeks were great artists, creating masterpieces in marble, bronze, clay, and paint.

But Greek art wasn't developed overnight. It wasn't like the Greeks just appeared out of nowhere and thought, 'Hey, let's make some sweet art.' Greek artists developed their style over years and years, refining and adjusting over time. And they had to start somewhere. Two of the earliest periods of recognizably Greek art, meaning art produced with a uniquely Greek style, were the Geometric and the Archaic. 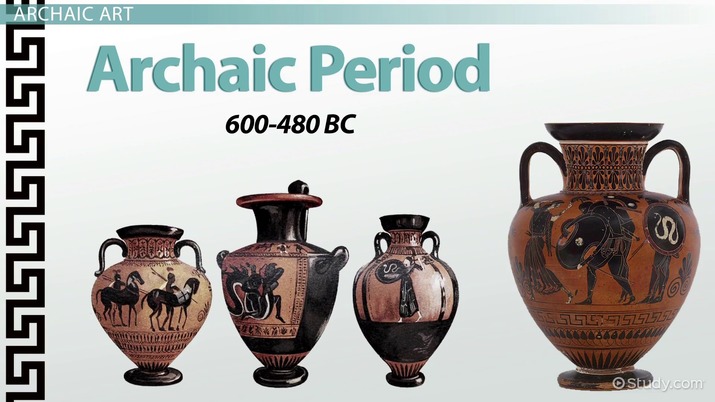 Coming up next: How Politics Influenced Greek Art & Culture

The oldest style of truly Greek art is the Geometric, a period lasting roughly from 900 to 600 BC. This era saw the development of the powerful Greek cities, signaling the rise of Classical Greek civilization. The Geometric Period in art is characterized by - you guessed it - a high use of geometric shapes, particularly on vases.

Vases were a major form of art in the Geometric Period. As Greek cities began trading across the Mediterranean, their vases became a major trade commodity, and artists spent more and more time decorating them. Vases of the Geometric Period were covered in geometric designs - abstract and ornamental designs with little or no narrative function.

This period also saw another artistic change, the return of human figures. For years, Greek art did not feature many human figures, but in the Geometric Period, people begin to reappear among the geometric patterns. However, their appearance was largely abstract, and human figures were also composed of basic geometric shapes.

Another form of art that became popular in the Geometric Period was small bronze sculpture. These little statues, generally only a few inches tall, were solid pieces of bronze, cast in a mold. Typically, these statues featured two combatants, facing each other, and locked in hand-to-hand struggle.

In this little statue, one of the two figures doesn't look quite… human. And that's because he's not. This is a centaur, a mythical creature from ancient Greek culture. There is not a lot of implied movement here and the figures are clearly abstract, although we can tell that both are bearded with helmets. They are also both nudes, reflecting an appreciation of the human form that will characterize Greek art for centuries. Some scholars believe that this may represent a scene from Greek mythology in which Hercules fought a centaur named Nessos, indicating that the art does have a narrative function.

As Greece became more of an economic power in the Mediterranean, they came into more frequent contact with other cultures, resulting in changing artistic styles. The Archaic Period, lasting from roughly 600 to 480 BC, saw many changes to Greek art.

In terms of pottery, the Archaic Period saw a great development in vase painting, using the natural red color of the clay and a black colored slip to create silhouetted figures in scenes of battle or recreation. Vases in this style are called Black Figure, and this was the technique used to create those earlier geometric designs as well.

As Archaic Era artists developed a more realistic figure painting in the black figure style, other artists tried using the black slip to create the background and details, leaving the natural red clay to create the shapes of the figures. This was called the Red Figure style. Red figure pottery grew quickly to become the most sought after style of decorated Greek vases.

The other major artistic development of the Archaic Period was the introduction of life-size statues. In the Geometric Period, statues were small. Now, artists began carving large statues out of marble, a soft and easily workable stone. These statues are called kouroi, meaning youths, and they have the same stance of a single foot forward.

Notice anything familiar about this style? The kouroi were heavily influenced by Egyptian art and reflect the growing relationship between Greece and Egypt. Greek kouroi are characterized by a rigid stance and a slight smile, common to all of these life-size statues.

Just like the earlier small sculptures, male kouroi were always depicted nude, while females remained clothed. Although heavily influenced by Egyptian styles, this was the first introduction of large-scale sculpture into Greece and set important precedents that would later result in some of the greatest marble sculptures in human history.

Two of the first artistic cultures of ancient Greece were the Geometric and Archaic Periods.

These styles were further developed in the Archaic Period of 600 to 480 BC. Artists of the Archaic Period created more recognizable human figures on vases, engaged in narrative scenes. Some artists also switched from Black Figure to Red Figure pottery by changing the use of black slip to create a dark background and details, leaving the figures the natural red color of the clay. Archaic Era sculptors began to create the first life-sized statues in Greece, borrowing heavily from Egyptian traditions. These kouroi statues all share a similar stance and a thin smile, but only the females were clothed.

The art of the Geometric and Archaic Periods may not always appear how we expect Greek art to look, but they were important moments in the development of Greek styles that would later set the foundations of all Western art.

After you are finished with this lesson, you should be able to name the first artistic periods of Greek history and describe the types of art that are attributed to them.

Cave Paintings of the Paleolithic Age