Despite the Dark Age, which destroyed two major Greek civilizations, the culture rebounded, creating works that surpassed anything ever seen before. Learn more about major Greek art periods.
Create an account

What Is Greek Art?

The people of Greece have been making art for just about their entire history, from the earliest civilization to the present day. While all of it is Greek art, when historians use the term Greek art, they're really referring to a period following the Dark Age, which had begun in 1200 BC and destroyed earlier populations, including the Minoans and Mycenaeans.

The historical period of Greek art starts at the conclusion of the Dark Age, around 900 BC. Even though Greeks had been making art for almost 2,000 years before this point, the end of the Dark Age marked the beginning of a time of innovation and evolution, during which the identity of Greek art would change and grow. Starting with basic shapes, the art would continue to develop to create some of the most striking work in the ancient world. 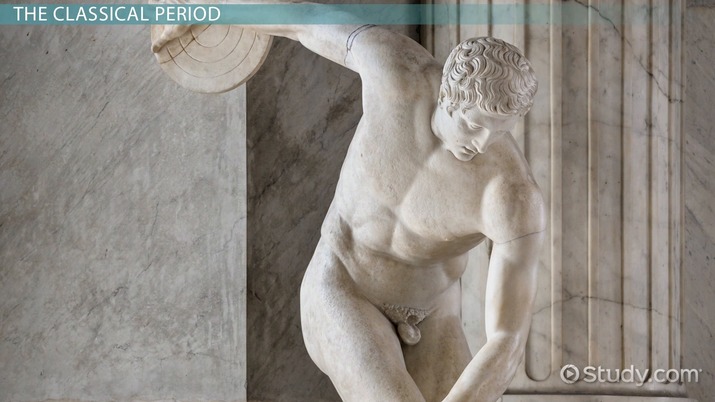 Coming up next: Ancient Aegean Civilization

The Geometric period of Greek Art lasted from 900 to 700 BC. Art from this period tends to be, true to the period's name, especially geometric, confining itself to representations and repetitions of shapes rather than the more realistic work of the earlier periods. Human and animal forms are relatively rare, and when they do happen, they exhibit many of the same geometric characteristics.

During the Geometric period, the most common medium was painting on vases. However, a few limited works of sculpture and bronze casts survive. The Greek region wasn't yet fully recovered from the Dark Age, which had essentially destroyed most Mycenaean and Minoan influences. The vacuum of influence during this period meant that Greek Art began to distinguish itself from earlier styles of art.

Emerging from the Dark Age and the last vestiges of the Geometric period, Greek artists began using a number of new methods and tools in their work. For the first time in almost 800 years, artists began working to recreate more realistic human forms. New technologies enabled pottery to be more colorful and ornate than ever before. This period of innovation is known as the Archaic period, and it lasts roughly from 700 BC to 480 BC.

Some Archaic art shows an Egyptian influence, certainly in regard to the placement of the feet, but much of it seems to be original to the Greeks. One point of originality in particular is the smile seen on Archaic statues, almost always staring back to the viewer.

Following this came red-figure pottery, where black forms the background for designs in the clay's natural red.

Archaic-period artists consciously experimented with both of these techniques, a particularly notable early innovation.

Around 480 BC, following the defeat of the Persians, the Greeks, especially the Athenians, came to dominate the Aegean region. This dominance would lead to the next major Greek period: the Classical period.

When many people think of Greek art, it is the images of the Classical period that immediately come to mind. During this time, roughly from 510 BC to 320 BC, the Greeks achieved their highest level of craftsmanship and pressed exploration of form and perspective in art to limits well beyond its previous bounds.

Classical art is perhaps most notable for its perfection of the human form in sculpture. Although many Greek pieces are now lost, Roman copies and written records from both Greek and Latin tell the modern observer a great deal about how the Greeks approached the human form. A favorite motif was that of the athlete, as the Greek style lent itself easily to the portrayal of musculature. Additionally, Greek artists undertook the scientific study of the human form for the sake of art; they found a number of ratios, including the Golden Ratio, that informed proportions throughout their work.

The Greek masters used their newfound discoveries outside sculpture as well. As architects, the Greeks used the ratios of nature to ensure that their buildings were in harmony with their surroundings. Perhaps the most famous example of this was with the Parthenon. The famous hilltop building was constructed with the Golden Ratio in mind, and that's not all. The temple's columns are built using a technique called entasis; a decrease in diameter toward the top causes a subtle convex curve in each column. Optical illusions can make straight columns look askew, so the Parthenon's architects used entasis to ensure that each column looks perfectly straight when the temple is viewed from the outside.

While the art of the earlier periods had been confined to small city-states which had commissioned it, the conquests of Alexander the Great allowed for the spread of Greek art throughout the known world. This meant that Greek techniques could be combined with other traditions, and artistic ideals first mastered during the Classical period could be developed further.

The new art was termed Hellenistic, because while it was very similar to art made by the Greeks (who called their homeland Helles), it was combined with other cultures and not purely Greek, hence a term that means 'Greek-like.' The Hellenistic period is said to begin around 320 BC and last until around 30 BC, when the Roman empire began its emergence.

Easily the most famous work of art from the Hellenistic period is the Venus de Milo, a sculpture from an unknown artist that has inspired numerous copies, both during the ancient world and today. The sculpture offers a perfect study of sculpture in the round, meaning that it was to be viewed from all angles.

Hellenistic art influenced a tremendous amount of territory. The empire of Alexander the Great spread Greek culture across the entire known world, reaching modern India and Central Asia. Coins provide the written proof that descendants of the Greeks maintained political power for some time, but the real points of interest are in the art. Through sculpture, for example, the depths of the Greek and Indian cultural exchange can be fully appreciated. Perhaps nowhere is that more clear than in the Buner Relief, which shows individuals in Greek clothing making an offering that could only be Indian in origin.

After the fall of the Minoans and the Mycenaeans, Greek art entered a period of growth and evolution that lasted almost 900 years. Coming out of the Dark Age in which most Mycenaean and Minoan art disappeared, the Greeks mostly created art with repeated shapes and patterns, in an era known as the Geometric period.

Following Geometric art came the work of the Archaic period, in which Egyptian influence and innovations in color opened up brand new possibilities for Greek artists. The Archaic period gave way to what may be the most well-known ancient Greek artistic era: the Classical period. Classical art features many depictions of the human form and musculature, and its architecture employs natural proportions, such as the Golden Ratio, to achieve harmony with its surroundings.

With the rise of Alexander the Great, Greek culture mixed with that of other nations, and brought with it the advent of the Hellenistic period, most notable for its influence from other cultures. Pieces like the Buner Relief show influence from India, and other works brought in the culture of Central Asian nations.

When the lesson on Greek art periods ends, assess your ability to accomplish the goals below: