The Greek myth of Perseus and Medusa involves a young hero named Perseus who sets out to defeat Medusa, a monster that turns men into stone. Explore a summary of this Greek myth, Perseus' adventures and common themes in Greek myths. Updated: 09/14/2021
Create an account

The Birth of Perseus

In order to fully understand the tale of Perseus and Medusa, it is first necessary to tell the story of Perseus' birth. Acrisius, the king of the Argos, had only one daughter, a beautiful girl named Danae. As Acrisius grew older he became worried because he had no sons, and he consulted the oracle at Delphi to ask if his children would inherit his kingdom. The oracle revealed that Acrisius would have no sons; however, his kingdom would pass to his grandson, the child of his daughter, Danae. She also revealed a dark and deadly secret: Acrisius was fated to die at the hand of his grandson.

Acrisius became fearful of this future event and so he locked the lovely Danae in a tower and refused to allow any men to see her. He hoped that by denying his daughter a husband, Acrisius could avoid the dark fate the oracle had promised. However, despite the precautions Acrisius took, he could not hide his daughter's loveliness from the Greek god Zeus. Zeus spotted Danae from the clouds and he appeared to her in a shower of gold.

When Acrisius realized that his daughter was pregnant as a result of the god's visits, he sealed Danae and her baby, Perseus, into a wooden chest and set it out to sea. Acrisius believed that both the mother and the infant would be drowned in the water or crushed against the rocky sea shore. But Danae and Perseus did not perish in the cold sea water; instead, their wooden chest washed up in the kingdom of King Polydectes. A fisherman discovered the pair and brought them to the king who was immediately entranced by the lovely young mother.

Danae and Perseus lived happily in the court of King Polydectes for many years and Perseus grew into a young man. When Perseus reached adulthood, the king, who had long loved his mother, proposed that he marry Danae and make her his queen. Perseus did not like this idea and refused to consent to his mother's marriage. 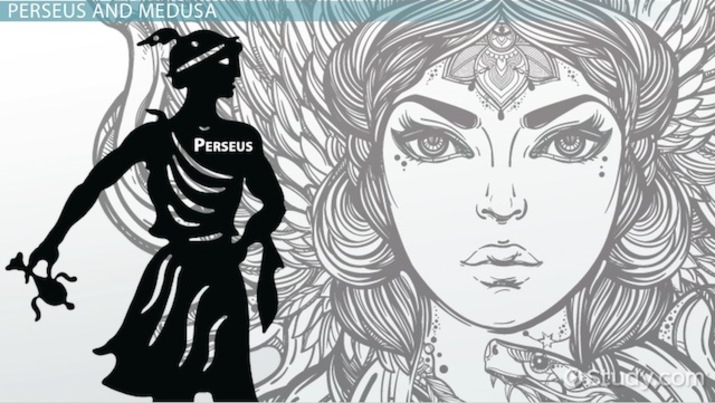 Coming up next: Hades, Greek God of the Underworld: Mythology & Overview

The cunning king hatched a plan to rid his kingdom of the troublesome young man so he might marry the beautiful Danae. One day, he suggested that Perseus set out on a grand adventure to defeat one of the fearsome Gorgon sisters, terrible monsters who terrorized the Greeks and defeated many would-be heroes. Eager for adventure, Perseus agreed to seek and defeat one of the Gorgon sisters, Medusa, a horrible monster who had the power of turning anyone who saw her into stone. Polydectes rejoiced that the youth would probably never return from his travels and concluded that he could marry Danae without difficulty.

Fortunately, Perseus was beloved of the gods. Athena, the Greek goddess of wisdom, and Hermes, the Greek god of mischief, appeared to the young man early in his travels. Athena provided the hero with valuable wisdom and advised him to seek out the Graeae, three old women who guarded valuable treasures that would help Perseus to defeat Medusa. Hermes gave the young hero a magic looking glass, which would allow him to see the monster without looking into her eyes.

Perseus found the three old women; however, they would not give up the treasures. Perseus noticed that the three sisters all shared one eye, passing it between them. The nimble young man snatched up the eye and demanded that the sisters give him three things: a magic helmet that would make him invisible, a pair of winged sandals that would allow him to fly, and a magic bag that would safely contain Medusa's head. In addition, Perseus forced the Graeae to tell him where the Gorgon sisters lived.

Armed with his new weapons and the location of the monster, Perseus soon arrived at the home of the Gorgons. Only Medusa, the most horrible of the sisters, was at home. Medusa's head was covered in writhing serpents, and one look into her eyes could turn even the strongest hero into a stone statue. Perseus used his magical helmet and winged sandals to sneak up on Medusa and attack. During the battle, he used his looking glass to see where the monster was and thus avoided being turned to stone. With these magical tools, Perseus succeeded in killing Medusa. With the head stored safely in his magic bag, Perseus set off for the kingdom of Polydectes.

On his way home from defeating the Gorgon Medusa, Perseus met a beautiful young woman named Andromeda, who was chained to a rock. Perseus defeated the sea monster that threatened to eat the young woman and unchained her from the rock. The two young people fell immediately in love and returned to Polydectes' kingdom as husband and wife.

When the couple arrived, King Polydectes immediately attacked the young hero; however, Perseus pulled out Medusa's head and turned him to stone. Later in his life, Perseus returned to the island of Argo to participate in some games. While taking part in the contests, Perseus threw a spear that accidentally struck and killed King Acrisius, thus fulfilling the prophecy.

Common Themes in Perseus and Medusa

Many Greek myths contain common elements that were intended to provide messages about proper behavior to the Ancient Greeks. Trying to avoid one's fate, like King Acrisius, was never successful. Acrisius deprived himself of a loving relationship with his only child and grandchild because he feared the fate that would eventually come for him. Loving a beautiful woman, whether you were a king like Polydectes or a god like Zeus, always had unexpected consequences. Finally, the story of Perseus reveals that whatever the motivation of their elders, young men like the hero in this tale needed to prove their intelligence and skill in order to become successful adults.

The story of young Perseus and his quest to defeat the Gorgon monster Medusa bears several themes common among Greek mythology. Perseus' grandfather, Acrisius, sought to send him away so that he could avoid the oracle's prophecy in which he's killed by Perseus. The child and his mother Danae found peace in the kingdom of Polydectes, who grew to love Perseus' mother. Once Perseus came of age, he rejected Polydectes' wish to marry Danae. Polydectes charged Perseus with killing one of the monster Gorgon sisters, thinking this would get him out of the picture permanently.

Perseus, aided by gifts bestowed by Athena and Hermes, defeated the Gorgon Medusa. He later rescued and wed Andromeda on his way home. Polydectes attacked Perseus upon his return; Perseus used the head of Medusa to turn his attacker to stone. Later, Perseus participates in a competition, and he throws a spear that inadvertently kills Acrisius, finally fulfilling the oracle's prediction.

This story includes themes common across Greek mythology: a man who fears destruction at the hands of his male descendants; kings cannot avoid their fates; beautiful women always bring unexpected challenges; and, young men's transition to adulthood is commonly marked by quests where they must demonstrate brains and skill.

Theseus in Greek Mythology | Who Is Theseus?

Arachne in Greek Mythology Story & Analysis | Who is Arachne?

Myth Overview, Types & Examples | What is a Myth?