Patricia has a Ph.D. in Progress, History and Culture as well as a master's degree in Holocaust and genocide studies. She has taught heritage of the western world and U.S. history.

The most advanced warship of its time was the Greek trireme. Understand the definition of a trireme and learn facts about its characteristics, operation and use in the Persian War, and see a diagram of a trireme. Updated: 09/10/2021
Create an account

What Is a Trireme?

The Greek trireme was a large warship with three banks of oars. The word 'trireme' was derived from the Latin word triremis, which meant 'three-oarer.' These ships were about 120 feet long and required 170 men to operate the oars. Built for speed, the trireme's low weight made it unreliable in rough seas and was most effective in battles close to shore.

The origin of the trireme has been the subject of much historical debate. The earliest known references to ancient triremes have been found in the work of the historian Thucydides. According to his writings, the Greeks took the design of the trireme from the Corinthians during the eighth century. Some historians trace the invention of the bireme, or two rows of oars, and the trireme to the Phoenicians. 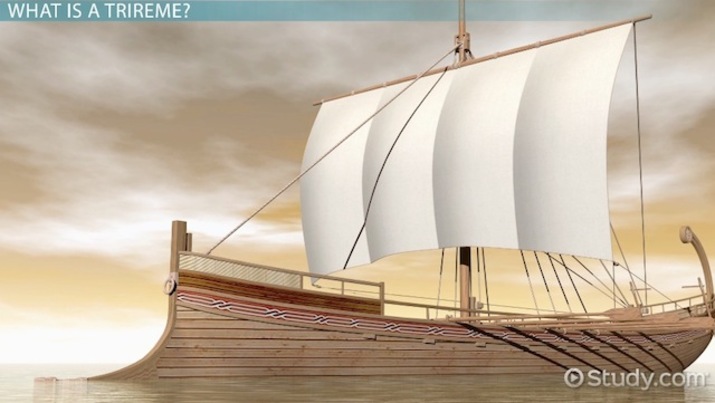 Coming up next: Helen of Troy: Story & History

Estimates of the trireme's top speed capabilities range from six to eight knots. The trireme was not meant for long journeys, since most supplies were left behind to allow maximum maneuverability in battle. The ships were so light that they could be carried ashore by about 140 men. The most common woods used in construction were cedar, pine, or fir.

Due to its weight, oak was only utilized for construction of the hull. The use of lightweight woods made triremes prone to getting waterlogged, so they would often be beached at night. Once construction was complete, the ship was decorated with eyes or other designs used to make the ship appear menacing to enemies.

The offensive tactics used by the officers consisted of either ramming another ship or swinging around the side and cutting off the oars before the enemy rowers could pull them up.

The crew of the Greek trireme consisted of approximately 200 men: 30 regular crew and 170 rowers. The regular crew included officers and sailors to run the ship and archers and spearmen for added combat effectiveness. The trierarch, or captain of the trireme, was usually a wealthy citizen of Athens. The person in charge of the deck was a kybernetes, or helmsman. The crew also comprised several other officers and sailors who operated the sails specifically.

Since military service was an important part of any full Greek citizen's life, the position of rower was filled by free men and not slaves. However, in some emergency situations, slaves were part of the rowers. The crews trained during peacetime to prepare for the rigors of operating the trireme. The crew and oarsmen needed to operate as a team in order to effectively maneuver the ships in battle. The timing of the rowers was essential to the success of the ship. Rowers were divided into three separate sections: the thranitai (or top row), the zygitai (or middle row), and the thalamitai (or lower row).

Uses in the Persian War

The trireme played a key role during the Persian War, especially in the Battle of Salamis in 480 B.C. The Persian navy was a formidable force in the ancient world. In anticipation of naval conflicts with the Persians, the Greek city-states began construction of a massive force of 200 triremes, a decision that paid off at Salamis.

The Greeks were vastly outnumbered at the Straits of Salamis, an area to the east of Greece. The Persians stood ready with 1,200 ships, while the Greeks only had 450. Since the channel was narrow, the Greek triremes easily outmaneuvered the more cumbersome Persian ships. The battle was a complete Greek victory, with only 40 Greek ships lost and 200 Persian ships destroyed.

The Greek trireme was the most advanced warship of its time. Although the origins of the trireme are still uncertain, it is likely that the Phoenicians originated the technology. The ships were constructed with lightweight wood in order to provide the best maneuverability. The ships could reach speeds between six and eight knots.

The effectiveness of these ships depended on the training and timing of the rowers. The triremes played a decisive role in the Greek victory at the Battle of Salamis in 480 B.C. The lightweight ships easily destroyed 200 Persian ships in the narrow waters of the Straits of Salamis.

To Rule the Seas

One of the most advanced warships of its time, the Greek trireme dominated the coastline of the Mediterranean. Its light weight and three levels of oars manned by 170 rowers allowed for speed and maneuverability that won the naval Battle of Salamis during the Persian War. The 30 or so crew members on each trireme included a treirach (captain), a kybernetes (helsman), sailors, bowmen, and spearmen.