The Group 3A elements don't have a whole lot in common, so we'll examine their unique characteristics in addition to their similarities. This video will explore the properties and uses of elements in this group.
Create an account

Definition of Group 3A Elements

Group 3A includes boron (B), aluminum (Al), gallium (Ga), indium (In), and thallium (Th), and they are located on the middle-right of the periodic table. Groups are the vertical columns on a periodic table that share similar properties. Periodic tables may look a little different, so you might see this group called 3A, 13, or IIIA - all of these are different ways of saying the same thing. 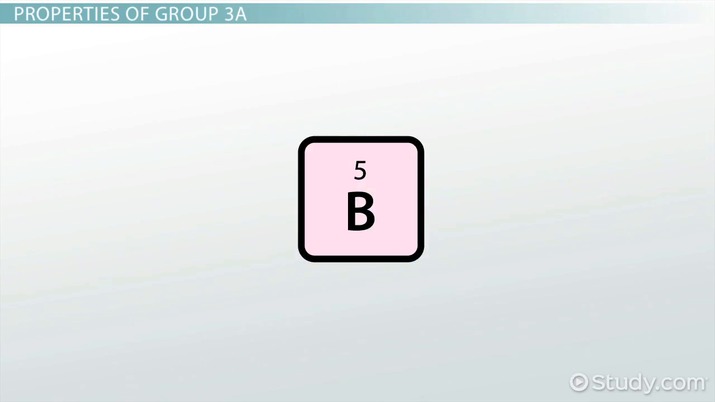 Coming up next: Group 4A Elements: Definition & Properties

Properties of Group 3A

Most of the elements in this group lose those three valence electrons and get a +3 charge, otherwise known as a +3 oxidation state. Atoms with a positive charge are called cations, so most of these elements become +3 cations. Notice I said 'most;' some of them can also become a +1 cation, so things can get a little tricky, but don't worry, that'll get explained later in the lesson.

Finally, most of the elements in Group 3A form ionic bonds, where valence electrons are transferred from one atom to another, but remember this group is all a little different, so sometimes they can form covalent bonds, where electrons are shared. Boron is the element that typically forms covalent bonds. Let's take a closer look at each element in this group. Just because they don't share a lot of the same properties doesn't mean they aren't interesting!

Boron tends to lose its three valence electrons and form a +3 cation. It isn't found in its pure form in nature and tends to bond, or attach, to elements found in the Earth's crust. It can also be found in the form of borax, working hard to clean your dirty clothes. It is also an important nutrient for plants. Of course, there are other uses for boron, but we don't want this indecisive member of this family to hog the spotlight!

The next family member tends to get all of the glory and is the star of the family. No, it's not a famous athlete, successful businessperson, or humanitarian, but you can find it everywhere! In fact, it's the most abundant metal in the Earth's crust, it lines your pan when you make cookies, and it houses your favorite soda. So, who is this useful and popular member of Group 3A? Aluminum! Like most members of the family, aluminum forms a +3 cation, and like boron, it's not found in its pure form in nature.

Every family has a silly member, right? Well the silly element in this group is gallium. Why? It's a liquid at about 86 degrees F. Can you imagine a metal melting at 86 degrees F? There are only four metals that are liquids around room temperature and gallium is the only one that is in Group 3A. This silly property of gallium makes it quite useful.

It can be found in high temperature thermometers, semiconductors, and there's even a Gallium Observatory in Italy where gallium is being used to detect neutrinos, which are tiny particles. Okay, so it sounds like gallium might not be that goofy after all! In addition to being a liquid at room temperature, it forms a +3 cation, just like boron and aluminum.

So, we have the indecisive, the star, and the silly family members, so who's left? We have indium and thallium, which are the difficult members of this group (you know, every family has at least one difficult member!). Most of the time, it's fairly easy to determine oxidation states for the representative elements, but there's always a few difficult members like indium and thallium. Like the rest of the group they have three valence electrons, but they don't always lose all three to make a +3 charge. Sometimes they become a +1 cation!

Let's start with difficult family member number one: indium. Like many of the other members of Group 3A, it is typically not found in its pure form in nature as it bonds with other elements. For a metal, it has a low melting point, so it's often used as solder, or a substance that is used to join two metals together. Now to the difficult part of indium. It usually forms a +3 cation like the rest of its family, but can occasionally form a +1 cation instead. This occurs when only one electron leaves indium instead of all three. Luckily, it usually loses all three electrons, so I guess it's only semi-difficult.

On to difficult family member number two: thallium. Like indium, thallium can have two oxidation states, +3 and +1, however, unlike indium, thallium prefers the +1 state, so it can usually be found as a +1 cation. In keeping with its difficult persona, thallium is toxic and has been used as rat killer. But thallium isn't all bad, it can be used in special high refraction glass.

So, you've met the 3A family: the indecisive, the star, the silly, and the difficult family members. Let's take a moment and review some important properties about this group:

So, the next time you see a family where everyone acts and looks a little different from one another, remember the 3A group!

Once you have finished, you should be able to:

Representative Elements of the Periodic Table