E. coli is prototroph bacteria capable of synthesizing all the growth factors necessary for survival, whereas auxotroph bacteria is a mutant strain incapable of producing a specific growth factor. Learn about extreme bacteria, factors that control the rate of bacterial growth like temperature, oxygen concentration, and pH, as well as the growth requirements of E. coli auxotrophs. Updated: 09/13/2021
Create an account

The bacterial world is everywhere. It is amazing the places that scientists have been able to find bacteria growing and surviving - deep ocean vents, boiling hot springs, water with extremely high salt concentrations, and even in ice! These extreme environments are now known to be bustling bacterial ecosystems and illustrate how versatile and adventurous bacteria can be. But don't pack your bags, because today we will not be journeying into any of those crazy environments to learn about those cool bugs. Instead, just look down at your gut. That is the destination of our journey today. 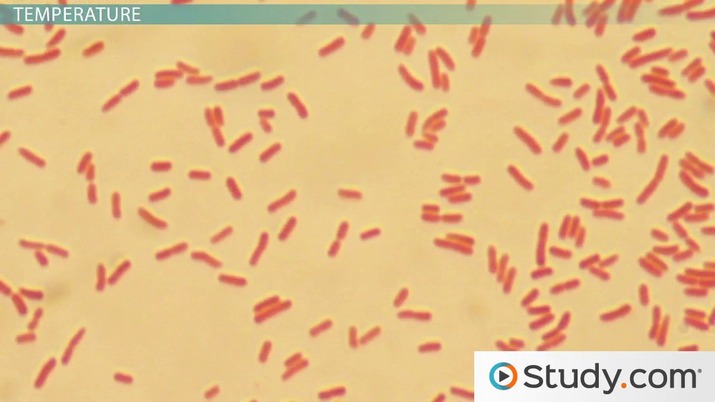 Try it now
Back
Coming up next: Disease Control & Prevention

Escherichia coli, or E. coli for short, is a Gram-negative, rod-shaped bacteria that is a normal inhabitant of the lower gastrointestinal tract of warm-blooded animals. E. coli and mammals have been evolving together since they both appeared on Earth between 120 and 160 million years ago. You can imagine that throughout all these years, E. coli has evolved to thrive in the gut environment. As a result, the optimum growth conditions for E. coli might as well be a list of conditions in the average mammalian gut. Before we look at E. coli specifically, let's take a quick look at what all organisms need for survival.

Carbon, hydrogen, nitrogen, oxygen, phosphorus, and sulfur are chemical elements required to build nearly all cellular components. In addition to these major elements, elements like iron, selenium, calcium, sodium, and several others are required to build specific structures and perform specific processes. E. coli, along with all other living organisms, requires environmental sources of all of these elements in order to survive. Most of these elements come from food sources, like carbohydrates, proteins, and fats.

In addition to these building blocks are growth factors, which are essential metabolites an organism needs but is unable to synthesize. Growth factors can include amino acids, nucleotides, fatty acids, or vitamins. In history class, you might remember learning about pirates developing scurvy after long voyages at sea. Scurvy, characterized by lethargy and eventual death, is caused by a deficiency of vitamin C. Humans are unable to synthesize vitamin C and must consume it in their diet. To you and me, vitamin C is a growth factor.

The naturally occurring (wild-type) strain of E. coli doesn't require any growth factors. If given the appropriate elements and an energy source, E. coli can synthesize all 20 amino acids, all vitamins, all nucleotides, and all fatty acids that it uses during growth and metabolism. Pretty efficient, right? Well, kind of.

Despite E. coli's ability to make its own growth factors, there is an advantage to supplying them. It takes a lot of energy to produce every single growth factor needed. E coli is able to grow and reproduce much faster if these compounds are provided. To a scientist experimenting on E. coli, faster growth allows more experiments and more data. With the right conditions and a complete mix of growth factors, an E. coli population can double in size about every 20 minutes. In the colon, where E. coli has to compete for growth factors with other intestinal bacteria and the host, it can take around 12 hours for the population to double.

Now that we understand the basic element and growth factor requirements, let's move on to discussing some of the growth variables that depend on the environment and also that we can vary within the lab.

The colon is, for the most part, an anaerobic environment. The absence of oxygen is obviously not a problem for E. coli, considering this is where it evolved to live.

But what about those deadly food-poisoning E. coli? They are usually found on the surfaces of unwashed vegetables and on contaminated beef. These areas are exposed to atmospheric oxygen concentrations. But E. coli can handle these wild swings in oxygen concentration no problem.

This is because E. coli is a facultative aerobe. This means that it is able to grow in environments with or without oxygen. While in the colon, the bacterium performs fermentation or anaerobic respiration but can switch to aerobic respiration when it is passed out of the colon and deposited on an aerobic environmental surface. As a general rule, a bacterium is able to more efficiently use its nutrients during aerobic growth and therefore generate more energy and grow faster.

Another important environmental factor is pH. The average human colon has a pH between 5.5 and 7. This lines up with the optimum range of E. coli as well. The bacterium can survive between 4.4 and 9.7 but grows best right around 7, which is neutral.

In the lab, a microbiologist will mix up a recipe that contains all the components needed for growth of E. coli and then adjust the pH using acidic and basic solutions to reach pH 7. Then they will also add a buffer that keeps the pH stable.

Why do we care so much about the growth requirements of E. coli? Well, most microbiologists refer to E. coli as the lab workhorse. It is used in countless experiments to learn more about how bacterial cells work. One of the easiest ways to figure out how something works in the cell is to remove or modify it and look at the impact on growth and survival.

Suppose you want to study the role of the amino acid lysine on E. coli growth. You start with a wild-type strain of E. coli that is able to synthesize lysine as well as all of its normal growth factors. This strain is referred to as a prototroph, or a parent strain that can make all needed growth factors that is used to make a desired, experimental mutant.

Then you blast the prototroph cells with radiation to cause mutations and then look for mutants that are unable to make lysine. This experimental mutant is called an auxotroph, or an offspring that has developed, or been engineered with, a nutritional requirement through mutation.

Using our example, your prototroph E. coli was engineered so that it could no longer synthesize lysine. You created a lysine auxotroph that requires the addition of lysine to grow. Now you can study the impact of lysine on your auxotrophic E. coli.

Let's review what we learned about E. coli growth requirements. Like all other organisms, E. coli requires major elements for survival. E. coli is a prototroph, meaning it is able to synthesize all of the required growth factors, but supplying these to cultures of E. coli results in a faster growth rate. In contrast, an auxotroph is a mutant unable to make a specific growth factor. In this case, the cells will not grow without the addition of that growth factor.

E. coli is a mesophile that grows best at 37 degrees Celsius in neutral pH environments. E. coli is a facultative aerobe and is able to grow without oxygen, but it can extract more energy from its nutrient source and grow faster if oxygen is present.

After you have finished this lesson, you should be able to:

Dextrin Overview & Chemical Formula | What is Dextrin in Food?

Dextrin Overview & Chemical Formula | What is Dextrin in Food?