Joe is thinking of starting to advertise on television, a complement to his existing marketing efforts, but he wants to be sure his investment makes sense and that he's reaching a large quantity of viewers with his message.

Tracking his reach with a rating point system is one tool he could use. A rating point metric tells you the size of the audience you're reaching with your message through a specific media platform. A couple of specific rating point measurements might help Joe as he continues looking for new ways to reach his audience. 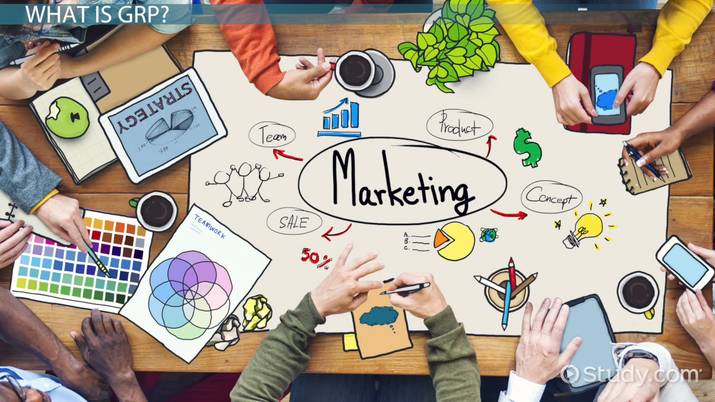 Coming up next: Effect of Media & Consumer Research on Advertising Budgets

One type of rating point system is the gross rating points, or GRP, which tells you the number of households your message can reach as a percentage of the total population of television viewers. Essentially, GRP is a cumulative measure of the impressions your campaign is earning.

Expressed as a percentage, the GRP calculation looks something like this:

A single rating point is equal to 1% of total participants. According to Nielsen, a firm that measures media audiences, there were an estimated 116.4 million television homes in the United States for the 2015-2016 viewing season. That means one rating point is equal to 1,164,000 households. The more rating points you earn, the more viewers there are who can potentially see your message, meaning a high GRP is important! It means more people are seeing your advertisement.

GRPs (and TRPs, which we'll discuss momentarily) are most frequently seen in television advertising, but can appear in other forms of media advertising. Let's look at a fictional television ad campaign for Joe's business from the beginning of our lesson. Let's say that Joe's advertisement is running during a television schedule reaching 43% of homes, 3 times over a one-week period. That means that Joe's advertising schedule would create 129 gross rating points for that time period (43 x 3 = 129).

Because GRPs relate to the strength of a media schedule, they can also dictate how cheap or expensive it will be for you to run an ad during that schedule. Programming with a higher GRP will have increased exposure, but likely also increased cost. Keep in mind that while a high GRP can deliver your message to many people, that does not mean guaranteed sales. You need to be certain your message is done well and is relevant while reaching your intended audience.

One last thing to consider relating to GRP is the diminished effectiveness of advertising as GRPs accumulate over time, sometimes referred to as wearout. Most research in this regard ties wearout to frequency, meaning effectiveness drops when an audience has been exposed to the same message too many times. Advertisers can work to prevent wearout by rotating several commercials, using multiple commercials, or pulling the advertisement from television for a period of time and then reintroducing it.

Where the GRP is the total audience seeing your message, the target rating points, or TRP, is the percentage of that audience most likely to earn you a sale, or your target audience.

Remember Joe from earlier? He was running his advertising campaign in a 129 GRP television schedule - Joe's ad reached 43% of viewers 3 different times. This same ad reached a target demographic of 20% of total viewers each time. That means Joe's TRP would be 25.8 (GRP of 129 multiplied by .20).

As with GRPs, tread lightly when putting too much weight into what these numbers mean for your overall campaign and bottom line. Just because your ad airs during a period with huge television audience reach does not mean that it will translate to sales or customers. The effectiveness of your ad in terms of engagement and converting viewers to sales is also important.

Rating point systems for advertising, in the medium of television in particular, can convey to marketers how many people their messaging is likely to reach. A gross rating point assigns a numeric value to the total number of households being reached, while a target rating point tells you how many of that total audience you're reaching is your target audience. While each can provide significant measurements for examining the reach of your campaign, ultimately, the success of your efforts relies on the content of your message and if you're presenting it in a forum where your intended audience is likely to observe it and act. Consider audience wearout in your planning by reducing boredom or apathy over your message being seen too many times in a given period of time.