Siddhartha Gautama is the founder of Buddhism. Explore his early roots as a royal prince, discover how he reached nirvana under the Bodhi tree, and learn about the spread of Buddhism through the Indian subcontinent. Updated: 09/30/2021
Create an account

Considered by many to be an offspring of Hinduism, Buddhism has its origins in the country of India, but unlike Hinduism, it no longer has a strong presence in the country of its birth. However, it's the leading religion in much of the Eastern world, especially in places like China, Korea, and Japan. Today, we're going to explore the founding of this rather ancient faith.

For starters, the founder of Buddhism was Siddhartha Gautama, known to history as Buddha. When studying him, we need to keep in mind it's very hard to tell fact from fiction. Since there was really nothing written about him until centuries after his death, much of his life has become the stuff of myth. Even the most scholarly of scholars disagree and contradict one another when it comes to Siddhartha Gautama. With this in mind, we'll work to cover some of the most agreed upon aspects of his life. 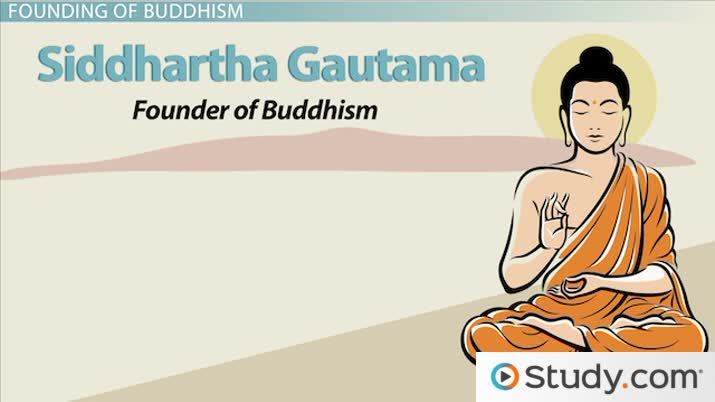 Coming up next: Nirvana: Enlightenment and Buddhist Salvation

It's believed Siddhartha Gautama was born sometime around the year 560 BCE. He was born to a very wealthy family, with his father ruling over an area near modern day Nepal. Because of his family wealth, Gautama was very sheltered from the outside world. Some even refer to him as a prince and believe his father confined him to the palace, where he showered him with all the trappings of wealth and pleasure. In other words, Gautama lived in a very, very, very comfortable cage.

Desiring more and despite his father's efforts, Gautama escaped from his gilded cage to see the outside world. On this field trip of sorts, he was shocked to see real life and the suffering that came with it. Legend tells us there were four people he saw who changed his life. They were a sick man, an old man, a dead man, and an ascetic, or in Western terms, 'a monk.'

Seeing the suffering of the sick and old man and especially seeing the corpse shocked the young prince who had lived such a cushy life. With this, he began to grapple with questions like, 'Why must humans suffer?' and 'Why is there pain in this world?' Upon seeing the monk, Siddhartha Gautama took it as a sign. Deciding to leave his family and his lavish life, he turned to a life of asceticism, or severe self-discipline, avoiding all forms of indulgence. Many scholars feel this was his attempt to reach enlightenment and the avoidance of sickness, pain, and death.

Upon leaving his sheltered life, Gautama traveled around India studying under Hindu priests. However, he soon became disenchanted with Hinduism so he threw himself into complete asceticism. Some legends go as far as teaching that he was so strict he would only allow himself to eat one grain of rice per day. Eventually, and being thin as a rail, Gautama thought better of this idea, coming to the awareness that this sort of life would kill him before it enlightened him.

Gautama eventually gave up starvation and turned to a life of meditation. One day, while sitting under a tree, known as the Bodhi tree, or 'Tree of Wisdom,' Gautama entered into deep meditation. During this meditation he claimed to have reached the highest degree of divine consciousness, known to Buddhists as nirvana.

In this transcendent state, he claimed to have been free from suffering, desire, and the sense of self. From this incident, Siddhartha Gautama earned the famous name of Buddha, which many translate as 'The Enlightened One,' 'The Awakened One,' or even the 'Goal Attainer.'

Believing he had sort of found the answers to life, he felt it was his mission to share what he had learned with the world. With this passion, he became what is referred to as a bodhisattva, or one who can reach nirvana, yet delays it in order to help others. Soon his message spread throughout India, especially resonating with those who had become disillusioned with Hinduism.

By the time of his death, sometime around the age of 80, Siddhartha Gautama, a.k.a. Buddha, was famous throughout the Indian sub-continent. Within a few hundred years, Buddhism would spread throughout all of Asia.

However, it's important to note that Siddhartha Gautama never declared himself to be divine. Instead, he preferred to be known as the 'Way-Shower.' It wasn't until much, much later that Buddhists would begin to consider Buddha as a deity.

Born as a wealthy prince, Siddhartha Gautama, the founder of Buddhism, led a sheltered life. However, upon seeing a sick man, an old man, a dead man, and an ascetic, or a monk, the young man became aware of the sufferings of the world. First turning to asceticism, or severe self-discipline, Gautama then turned to meditation.

One day while sitting under a Bodhi tree, or the 'Tree of Wisdom,' Gautama claimed to have reached the state of nirvana where he was free from suffering, desire, and the sense of self. With this, Asia was forever changed as Siddhartha Gautama, came to be called Buddha - 'The Enlightened One.'

Buddhism: The Middle Way to Enlightenment

The Epic of Gilgamesh

The Triple Gem of Buddhism: The Buddha, The Dharma & The Sangha

The Four Noble Truths & the Eightfold Path to Enlightenment