As Merchant guilds were created to protect workers and regulate trade they began to take advantage of individual craftsmen. Learn more about guilds in Western culture, economies in the high middle ages and their importance. Updated: 10/25/2021
Create an account

The life of a commoner in the High Middle Ages wasn't easy. By High Middle Ages, we are referring to a period of time that spans from around the 11th century to the 13th century. In Western Europe, feudalism was the system of government. This means the higher classes were royals and nobles who owned land, and the lower classes were those who worked on the land.

The landowners were expected to be unquestioningly loyal to the king. In exchange, the noble was granted control over his land and the peasants who lived and worked on it. Peasants worked to maintain the land and paid taxes and rent to their lord.

Feudalism was not very beneficial to the lower classes, and there was little chance a peasant would ever move up in the social ranks. In the High Middle Ages, taxes grew along with an increase in trade and foreign military campaigns. No single peasant had much of a say about the oppression, but a group of peasants with a common voice was more readily heard. 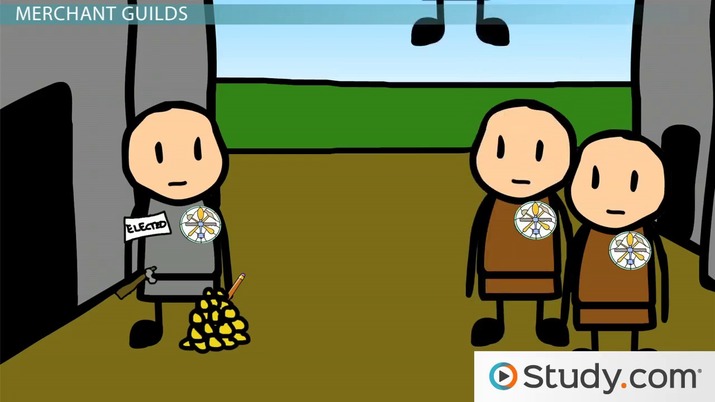 Coming up next: Middle Age Royals of England and France

The Birth of the Medieval Guild

As peasants who shared commonality in the product they sold or made formed into an organized group, they became known as guilds. Guilds created standards for their products and regulations for sale. Guilds provided a means for a person to move higher in the social class system. The guild set standards for the products of its members, and also for the means by which they were compensated. Guilds could grant protection to their members against high taxes or rent forced upon them by their lords.

A guild could fix the price of a product and prevent any advertisement or price reductions to stop competition among craftsmen and merchants. In doing so, the guild not only provided protection to its members, but also to consumers. Quality standards of the products offered also ensured consumers would not be taken advantage of.

Craftsmen and merchants weren't allowed to trade products with people who were not members. Guilds also provided care for members who became sick and protected them while they traveled. Similar to modern unions, they also petitioned for good working conditions and reasonable working hours.

Guilds also helped with the cost of funerals for its members, and helped provide care for orphans and workers who became disabled. Some supported education for its members as well. At the time, most of the schools were held in monasteries and were only used to educate clergy. As trade increased and the demand for literacy in commoners for record keeping grew, church schools could no longer handle the educational needs of the people. Some of the earliest secular schools were supported by guilds.

In addition to caring for the sick and disabled, guilds also helped build buildings and protective barriers around villages and towns. They provided military assistance against any foreign invaders, and monitored the town for criminal activity. The members were thought to have high ethical and moral standards and expected to avoid any corruptive behavior.

Each guild had its own official charter. The charter was the legislative grant written by the government that identified the group as a guild. In having official status, guilds were able to enforce rules on their members. Merchant guilds controlled the way trade was conducted in a town. They enforced rules, like bans on trading with non-members.

Some merchant guilds became very powerful, and their members were able to obtain higher social positions in their towns. Some held office within their cities while also representing their guild. As members could climb to the hierarchical ranks in a guild to help their social status, membership consistently increased.

Craft guilds were created to protect craftsmen and traders against merchant guilds. They worked much in the way of the merchant guilds, shielding members from excessive taxes and providing care and protection for its members. Guilds were formed by people who produced the same type of product. Some of the guilds formed at this time include the following: bakers, masons, painters, apothecaries, candle makers, clothiers, tanners and cobblers.

Although craft guilds attempted to regulate the number of members, the guilds grew in number and size very quickly. A hierarchy developed to regulate members. The newest members of a guild were known as apprentices. Apprentices were developing skills within their craft and learning the ways of business. They were given training by the guild along with food and shelter.

If an apprentice was successful, he would then reach the second level of the craft guild and be known as a journeyman. Journeymen were paid a small wage while they got better food and a slightly higher quality of shelter. If a journeyman met with success, he could reach the highest level of the hierarchy, the master. In order to become a master, a journeyman's work had to be examined by other masters. If the masters approved of the journeyman's work, he could have his own shop. This would give him the level of master in his guild.

As we briefly learned before, the educational structure was changing in Western Europe in the High Middle Ages. Crusaders who were fighting a holy war in the Near East returned from battle with manuscripts written by famous Greek philosophers, like Aristotle and Plato. These texts were normally only available to monks who copied them for preservation rather than for education. Now that secular schools were developing, these classical documents were used to teach many people how to reason and debate ideas with each other.

Education advanced quickly under the classical structure, and masters began to form their own guilds. These guilds were known as universitas, which was a Latin term that meant a group of people associated into one body. You might think of these as scholastic guilds. These groups enforced educational standards on their students and teachers. This was the beginning of the modern university.

Feudalism in the High Middle Ages created an unending oppression for peasants. In order to have a better voice and stop unfair treatment, craftsmen and tradesmen banded together to organize guilds. Guilds offered a means by which a commoner could increase his place in the social hierarchy.

Merchant guilds were formed to protect its members and regulate trade. As merchant guilds grew bigger and more powerful, they began to take advantage of individual craftsmen. The craftsmen then began to form their own guilds called craft guilds. Craft guilds worked to protect its members from overregulation and to set standards for the products produced. Additionally, scholars began to form guilds to regulate educational standards and protect students and teachers. These guilds were referred to as universitas, and led to the creation of modern universities.

Upon completion of this lesson, you should recognize the importance and influence of merchant and craft guilds on merchants, craftsmen and the common good of the community. Recall the growing trend towards education in Western Europe during the High Middle Ages as well as the beginnings of today's universities.

Create an account
Guilds in Western Culture and Economies in the High Middle Ages
Start today. Try it now
History 101: Western Civilization I

Unification of Northern China by Shi Huangdi | Who was Qin Shi Huang?

Clovis I History & Reign | Who were the Franks?