View bio
Haloalkanes and haloarenes contain halogens. In this lesson, we'll learn what they are and some properties of them. We'll also learn some methods to prepare them. Updated: 01/24/2021
Create an account

During the Vietnam War, herbicides containing haloarenes were used to try and defoliate the jungles, to make it easier to fight. These haloarenes cannot be broken down by bacteria in soil, so they continue to remain intact to this day. 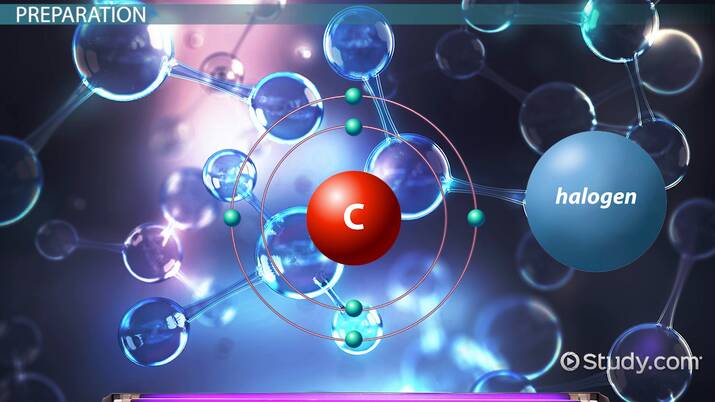 The halogen is more electronegative than hydrogen atoms, so this makes the carbon-halogen bond have a partial charge, with a partial negative charge on the halogen and a partial positive charge on the carbon atom. The largest partial charge is with iodine (since it is the most electronegative). This slight dipole makes haloalkanes and haloarenes have high melting and boiling points. It also makes it susceptible to nucleophilic attack.

Despite the slight dipole, most haloalkanes and haloarenes are not very soluble in water. This is because the alkane or arene 'tail' is too long and bulky to dissolve into water.

Haloalkanes and haloarenes are very dense, and even the simplest haloalkane or haloarene has a higher density than water. As the number of halogens, the weight of the halogen, or the size of the alkane/arene increases, the density increases as well.

There are several different types of haloalkanes and haloarenes. These types can be defined based upon the number and position of the halogens.

The carbon-hydrogen bond is very difficult to break, because this typically leaves a brief positive charge on carbon, which it doesn't like to have. So, forming haloalkanes and haloarenes can be difficult because it is so difficult to break the carbon-hydrogen bond. Some methods only work to make haloalkanes and others only work to make haloarenes. These methods are:

We'll now look at these different methods in more detail, one at a time:

One way to overcome this hurdle is by using UV light (so adding a lot of energy) to break the halogen and the alkane or arene into a free radical. The free radicals are very unstable, so they will readily combine to form haloalkanes and haloarenes. But this is so reactive that it will easily put a halogen onto every carbon, so it isn't very easy to control this process. If you wanted a halogen on every carbon then this process is an easy way to halogenate alkanes and arenes, but otherwise, it isn't very useful.

Another halogenation method that can be used is electrophilic substitution. This method doesn't work to make haloalkanes, because there needs to be a double bond in order for this method to work. It works for haloarenes because the double bond remains after the reaction is finished, allowing aromaticity to remain.

This reaction occurs by forming a partial positive and negative charge on binary halogen, let's use Cl2. This compound can become partially charged by using a compound such as FeCl3, which draws electrons onto one side of the molecule.

Now that one of the chlorines in the molecule has a partial positive charge, it is lacking electrons, making it highly electrophilic. Benzene is highly nucleophilic, meaning high in electrons. In fact, all arenes are highly nucleophilic; they just don't like to react because it will break aromaticity. However, in this case, where there is a compound very low in electrons, it is able to react.

For a little while, there is a positive charge on the benzene, which means that aromaticity is broken for a brief period. This negative charge can be stabilized through resonance. Since this compound is not nearly as stable as the arene form, it doesn't last for very long. A base (the other halogen) can come and remove a hydrogen, reforming aromaticity.

Another halogenation method that only works to form haloalkanes is the replacement of diazonium groups, or Sandmeyer reaction. In the Sandmeyer reaction, we start out with a primary aromatic amine. By reacting the aromatic amine with a halide acid (such as hydrochloric acid, HCl) and sodium nitrite, the diazonium group can form. The addition of a cuprous halide (such as cuprous chloride) will kick off the N2 group and have just the halide attached, forming a haloarene.

We have mentioned a couple of reactions that can only occur to form haloarenes. One method that can only form haloalkanes is electrophilic addition. This reaction starts out with an alkene (which you might recall is a compound with a carbon-carbon double bond). This method is preferred to the UV light method because the halogen will only be added where a double bond is located. This method will not work to form haloarenes because the double bond is broken, which would break aromaticity in the arene.

Hydrogen halides are added by having the double bond attack the hydrogen halide (such as HBr). This puts the hydrogen onto one of the carbon atoms and a positive charge on the other carbon. The negatively charged bromine can then be added to the carbon to form the haloalkane.

When starting with a di-halogen it first needs to be primed, as with electrophilic substitution, to form partial negative and positive charges. Once this occurs, the double bond can attack, adding one of the bromines to the compound (like with electrophilic substitution). After this occurs, the second bromine is also added forming a di-bromide haloalkane.

These can form using several different methods, including:

This activity will assess your knowledge regarding the properties and preparation of haloalkanes and haloarenes.

For this activity, study the scrambled letters and try to unscramble or rearrange them to form a word or phrase that fits the given clues. To do this, you must right-click and print this page. Lastly, with a pencil and an eraser, neatly write your answers in the appropriate blank spaces in the clues.