Emma has taught college Music courses and holds a master's degree in Music History and Literature.

George Frideric Handel's oratorios made him famous across England. Learn more about Handel's career, some of his major works, and how his oratorio Messiah became historical in England. Updated: 09/21/2021
Create an account

Handel's Messiah is the world's most popular English choral work. It's also one of the most recognizable masterpieces from music's Baroque period (1600-1750). Did you know this famous English work was written by a German composer?

Born Georg Friedrich Händel, he changed his name to George Frideric Handel after he became a British subject. In this lesson, we'll explore how Handel built his career in England and how oratorios, like Messiah, made him one of England's most beloved composers. 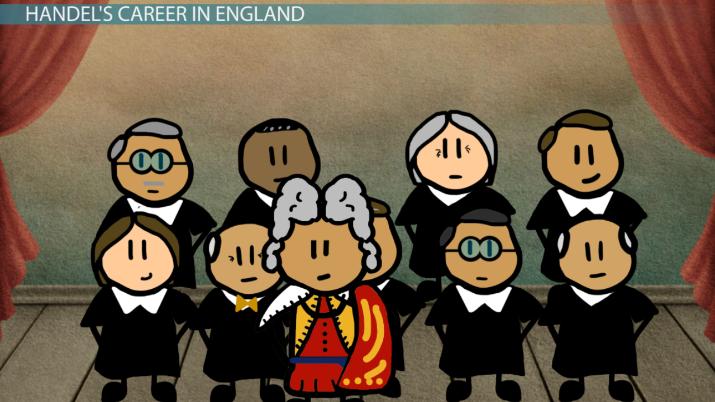 Coming up next: The Baroque Orchestra: Instruments, Structure & Forms

Handel was Born in 1685 in Halle, Germany. As a young man, he worked as a church organist in his hometown.

Later he moved to Italy, where he became a pro at writing the most glamorous music genre of his day: Italian opera. Baroque operas were spectacular, high-budget affairs full of special effects, snazzy costumes and scandalous stars. Basically, it was Baroque Hollywood.

In 1711, Handel's opera Rinaldo was a smash hit in London. Soon, Handel had relocated to London to write and produce Italian operas. He achieved massive success with shows like Giulio Cesare, which retold the story of Caesar and Cleopatra.

Handel was a powerful, imposing guy who knew how to get what he wanted in the temperamental world of opera production. For example, one day his diva-tastic lead soprano refused to sing one of her solos because Handel hadn't originally written it just for her. Handel dealt with this by picking her up and threatening to drop her out of a window. Handel famously shouted that the soprano was a 'she-devil,' but that he was 'Beelzebub, the prince of devils.' People learned not to mess with him.

While he was producing opera in London, Handel was also employed as a composer for a German aristocrat, the Elector of Hannover. Handel's life simplified in 1714, when the Elector became King George I of England, and Handel decided to become a British subject.

Handel enjoyed a prosperous career writing music for the king. Some of his most famous instrumental pieces were written for royal functions. For example, Handel's Music for the Royal Fireworks is a brassy, spectacular set of outdoor pieces written for a fireworks show and treaty celebration in 1749.

The premiere of this work was definitely memorable. Thanks to massive publicity, more than 12,000 people chose to attend, creating an 18th-Century traffic jam that closed London Bridge for hours. Then, during the performance, the fireworks malfunctioned, the stage caught fire and the giant audience stampeded for the exits. That might not sound like the best publicity, but he cheerfully re-arranged the piece for later performances, and it became wildly popular.

In 1728, Handel's status as a popular London composer was threatened by a new musical hit: John Gay's The Beggar's Opera. This show combined spoken lines with catchy, popular-style songs, much like a Broadway musical. The songs were in English, the characters were hilarious criminals, and the show satirized the overblown style of Italian opera. The Beggar's Opera was a big hit with the rising middle class, who started to demand accessible, English-language music instead of Italian operas.

Handel's solution was to focus on writing English-language oratorios instead of operas. An oratorio is a large-scale piece of music for choir, orchestra and vocal soloists, which tells a story without staging or costumes. Most oratorios are based on stories from the Bible, a source that Handel's English audiences knew well.

Handel's first big oratorio success came in 1733 with Deborah, an oratorio about a female leader and warrior from the Bible's book of Judges. Handel went on to write a series of increasingly popular oratorios. In 1737, he wrote Saul, the story of an ambitious, conflicted Old Testament king, and Israel in Egypt, which dramatized the biblical story of Moses and the Exodus.

In 1741, Handel wrote Messiah, his greatest commercial success and the most popular oratorio of all time. For Messiah, Handel's friend Charles Jennens had created a unique oratorio text: he compiled passages from the Bible's Old and New Testaments to recount the life of Jesus. Handel must have been excited about the project because in a remarkable burst of genius, he composed the entire oratorio in less than 30 days.

Although most Messiah performances come at Christmastime these days, Handel actually wrote the work for an Easter performance. Messiah was a huge hit when it premiered in Dublin, Ireland, on April 13, 1742. It became popular in London several years later.

Contemporary accounts claim that when King George II (the son of Handel's original royal boss) heard the famous Hallelujah chorus from Messiah, he was so inspired that he stood up to honor the music - and then the whole audience saw him and stood up, too. Today, nobody's sure if King George was honoring the music or if he just wanted to stretch or scratch his back or something. Anyway, the custom remains: audiences always stand during performances of Handel's magnificent Hallelujah chorus.

Handel went on to write more oratorios, like the dramatic Judas Maccabaeus (1746) and Jephtha (1752). He also produced regular benefit performances of Messiah at the Foundling Hospital, an orphanage in London. Some say that he chose the orphanage as his favorite charity because he never had children of his own.

When Handel died in 1759 after a botched eye operation, he was buried at Westminster Abbey and honored as one of England's cultural heroes. His oratorios remain beloved by English-speaking music lovers the world over.

George Frideric Handel (1685-1759) was a German composer from music's Baroque period (1600-1750). After studying music in Germany and Italy, he made a career writing and producing Italian operas, like Rinaldo, in London. He also worked for English royalty, composing works, like Music for the Royal Fireworks. After Italian opera fell out of favor, he turned to oratorio, an unstaged choral genre for choir, soloists and orchestra. His most famous oratorio is Messiah, which includes the famous Hallelujah chorus.

Organ Instrument Types, Characteristics & History | How Does an Organ Work?

Lieder Composers & Music | What Is a Lied?

Classical Symphony Parts & Structure | What is a Symphony?

Haydn's Surprise Symphony Overview & Analysis | What Is Haydn's Symphony No 94?

Music During the Enlightenment Period