Kimberly has taught college English and has a master's degree in education.

'Harrison Bergeron' is a short story about what happens when an attempt to create equality for all citizens goes horribly wrong. This lesson will look at the themes of equality and government control in the story and will also focus on the concept of dystopian fiction.
Create an account

Have you ever tried to picture a world where everyone is completely equal? A world where the government makes sure that everyone has equal wealth, equal intelligence, and equal levels of attractiveness? On the surface, this might seem like a perfect place to live - until you start to wonder how the government would actually accomplish this monumental task.

Kurt Vonnegut Jr. wrote about just such a world in his 1961 short story 'Harrison Bergeron.' This story is an example of dystopian fiction, or a type of fiction in which a society's attempt to create a perfect world goes very wrong. 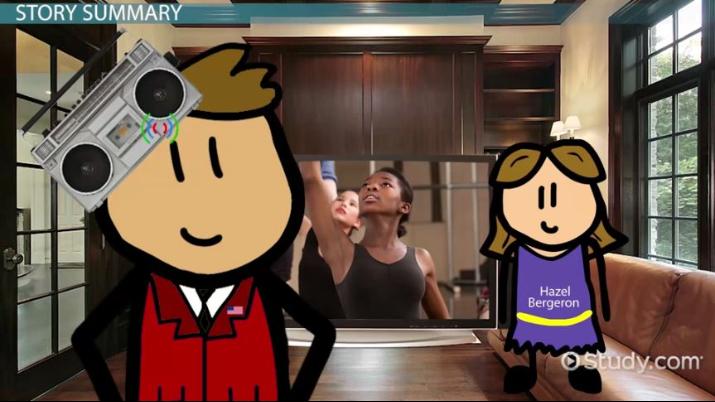 'Harrison Bergeron' is set in America in 2081, during a time when the 211th, 212th, and 213th Amendments had been added to the Constitution in order to make sure that everyone is equal in every way. This equality is accomplished due to the diligent efforts of Diana Moon Glampers, the United States Handicapper General. As her title suggests, she is the government official who creates handicaps that will bring the stronger or smarter members of society down to the same level as the slower members.

In the opening scene, George and Hazel Bergeron are in their living room, trying to watch ballerinas on television. However, they are both having trouble concentrating. Hazel is so mentally slow that she can't remember anything for more than a few minutes. George is very intelligent, but in order to maintain equal status with the rest of society, he has to wear a little radio that plays sounds in his ear at random intervals. And not just any sounds, but loud, ear-splitting sounds. Imagine trying to concentrate on anything while a 21-gun salute or a siren blares in your ears! The sounds are so debilitating that George is reduced to Hazel's level; he is unable to think of anything for more than a few minutes at a time.

The ballerinas are also wearing government-issued handicaps: sash weights and bags of birdshot that keep them as awkward as other members of society. Their dance is interrupted when Harrison Bergeron, Hazel and George's 14-year-old son, bursts into the studio. Harrison is everything the society is trying to control. He is so strong that the Handicapper General forced him to wear 300 pounds of scrap metal; he's so attractive that he has had his eyebrows shaved off and wears a big rubber nose; and he's so intelligent that he has to wear huge earphones and special glasses that give him constant headaches. In spite of this, the government still considers him under-handicapped.

After breaking into the studio, Harrison rips off his handicaps and begins screaming that he is the new ruler, the emperor. He chooses one of the ballerinas to be his empress and rips off her handicaps, as well. They dance, gracefully and beautifully, around the studio until they are practically floating in the air. At this point, Diana Moon Glampers bursts in, shooting and killing both Harrison and the ballerina. It is only then that equality is restored.

The theme of a story is the main idea or point that the author is trying to get readers to understand. In 'Harrison Bergeron,' the two themes are centered around equality and government control.

Equality for all people is a noble goal. However, Vonnegut uses 'Harrison Bergeron' to show that complete equality is impossible. Diana Moon Glampers and the government try everything they can to keep all people on the same level, which creates a society of fools. Hazel Bergeron is so mentally slow that she forgets events almost as soon as they happen. Since there is no way to increase her intelligence, the government tries to bring the rest of society down to her level.

In spite of these attempts, people like Harrison are born - people who are bigger, more attractive, and smarter. The only way to equalize Harrison is to kill him, showing that complete equality is an impossible goal.

Vonnegut published 'Harrison Bergeron' in 1961, during a time when people were beginning to lose faith in the American government and were demanding change. Vonnegut uses the story to illustrate that government control is dangerous. The legislature in the story has passed hundreds of amendments to the Constitution and now regulates every aspect of citizens' lives, even their appearance. This has created a dysfunctional society that is slowly destroying its strongest members. 'Harrison Bergeron' is a warning that allowing the government to take away free will is dangerous for individuals and society.

Genre refers to the specific category or style that a literary piece belongs to. 'Harrison Bergeron' is part of the dystopian fiction genre. It's a story that focuses on a society that is trying to create a perfect world for its citizens. Unfortunately, in dystopian fiction, these attempts have gone horribly wrong and have actually damaged the society they were trying to improve. In 'Harrison Bergeron,' the government is trying to create a society that is completely equal. But their attempts have ruined or killed the strongest members of society and reduced the rest to fools.

'Harrison Bergeron' is the story of a society that is trying to ensure that all its citizens are completely equal. Although this seems like a good goal, Vonnegut shows that this is impossible to achieve. It is a warning to all of us to maintain our free will and not give the government too much control.

In 2081, America is truly the land of equality. All aspects of society are given out equally to all its citizens, and those born with advantages over others are equipped with handicaps to limit their abilities. Kurt Vonnegut Jr.'s 'Harrison Bergeron' is a dystopian fiction about the dangers of government control even with an apparently noble goal like equality.

South Africa in the Apartheid Era

The Most Dangerous Game: Characters & Analysis

The Most Dangerous Game: Summary and Themes

The Interlopers by Saki: Theme & Analysis

The Setting of Lord of the Flies

To Kill a Mockingbird Chapter 2 Summary

Bradbury's All Summer in a Day: Summary & Analysis