Health issues become more common and more serious in late adulthood. In this lesson, explore preventative measures, the roles of nutrition and drugs in health care, and how attitudes in late adulthood can impact recovery. Updated: 10/19/2021
Create an account

Hector is facing some challenges. He's in his 70s, and lately, his health hasn't been so great. He's overweight and has some heart problems because of it. Not only that, he's just been diagnosed with lung cancer. As you can imagine, Hector's feeling depressed and just wants to curl up under his covers and not do anything.

Hector is in late adulthood, or the time of life after age 65. There are many good things about this time in life. Many people find that they have more time to explore their hobbies and spend time with their loved ones. They might feel wiser and better prepared to deal with the stress of everyday life. But there are some downsides to being older, too.

Health issues rise in late adulthood, and people, like Hector, find that they are facing challenges with their health that they didn't have when they were younger. And, as physical health issues spring up, so can mental health problems, like when Hector felt depressed because of his cancer and heart issues. The good news is that there are some things that people can do to prevent and deal with health complications. Let's look closer at how nutrition, drugs, and attitudes can affect health. 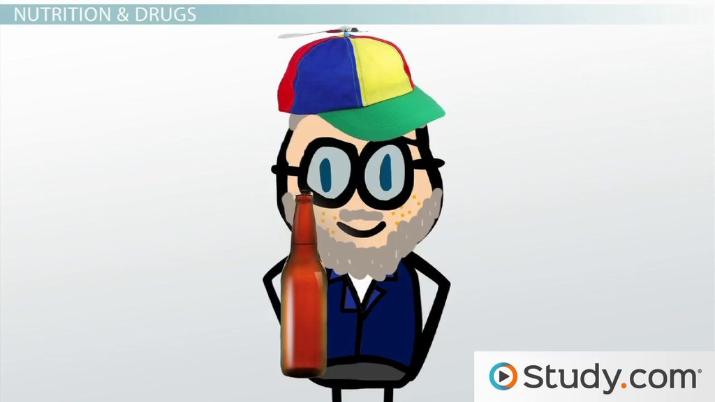 Coming up next: Community-Based Health Care Services for the Elderly

Hector has two major health issues: he has heart problems and he has lung cancer. There are other, more minor issues, too, but those are the biggest of his health challenges. Hector might have been able to prevent those diseases if he had taken steps when he was younger to lead a healthier life. Nutrition is a very important preventative measure. In fact, some doctors say that what you eat (and how much) is the biggest preventative measure you can take!

Hector didn't have good nutrition during his life. He ate a lot of junk food and fast food, and he's always been a little overweight. Eating unhealthy and being overweight raise the risk of both heart disease and all types of cancers. If Hector had eaten a healthier, more well-balanced diet, he might not have as many health issues now. And while nutrition can't cure his cancer, eating healthy now can help him increase his chances of survival.

Food isn't the only thing that Hector could be better at. Smoking tobacco is a serious problem for many people, Hector included. His lung cancer is likely due to the fact that he's been smoking for years. If Hector hadn't smoked or had quit when he was younger, he might not be facing cancer now. Both nutrition and smoking are choices that Hector made when he was younger that are haunting him now. And while changing his behavior to quit smoking and eat healthier now will still have an impact, the biggest impact would have been if he had corrected his course years ago.

There are also some drug-related issues that Hector, and many other people, face in late adulthood that they didn't face when they were younger. For example, alcohol abuse can occur later in life due to the changing effects of alcohol on the body. When Hector was younger, he liked to unwind at the end of the day with a beer or two. He never really got drunk, though. But nowadays, he finds that just one beer is enough to make him feel tipsy. This is because alcohol affects him more now that he's older.

As we've seen, what Hector puts into his body has a big impact on his health. But that's not the only thing that can affect him. Remember that he's got cancer and heart disease, and he's feeling depressed. Studies have shown that all of those conditions can be affected by a person's attitudes and beliefs.

In a very real way, a person's knowledge and beliefs can influence what preventative measures they take and what treatment they implement in their lives. For example, if Hector didn't believe in chemotherapy, but his doctor recommended it, his belief might prevent him from getting the best treatment for his cancer.

Life satisfaction also plays an important role in health. Studies have shown that people who are happier with their lives tend to be healthier as well. Remember that Hector has heart disease. That's one disease in particular that can be very influenced by life satisfaction; happy people tend to have healthier hearts.

Studies have also shown that religion and other forms of social support can impact recovery from illness. People who have faith, and people who have a strong network of friends and family to help them, tend to recover better from illness than those who don't. For example, Hector is very involved in his church, and all the church members are there to support him. With their love and help, he has a better shot at recovery than if he was alone.

Late adulthood is the time of life after age 65. During that time, health issues become more common and more serious than at other times in life. Preventative measures involving nutrition, smoking tobacco, alcohol abuse, and drug interactions are things that people can do at any time of life, including late adulthood, to help prevent medical problems. In addition, a person's attitudes can affect his or her health, particularly in the areas of knowledge and beliefs, life satisfaction, and religion and social support.

Now that you are done with this lesson you should be able to: