Deborah has 4 years of teaching experience and a master's degree in program development & management.

A health care system is designed to maintain the health of a community, provide services for the ill and injured, and try to reign in costs. Learn about the concept of the health system, and explore various health care models, including the Beveridge and Bismarck models, the national health insurance model, and the out-of-pocket model. Updated: 09/15/2021
Create an account

A health care system is constructed for three reasons. First, the system maintains the health of the community. It also provides services to the sick and wounded. Additionally, it helps curb the costs of expensive medical bills

Currently, we recognize four different types of health care systems. Some countries base their system upon one model, while others choose a combination. The choices they have to choose from include: 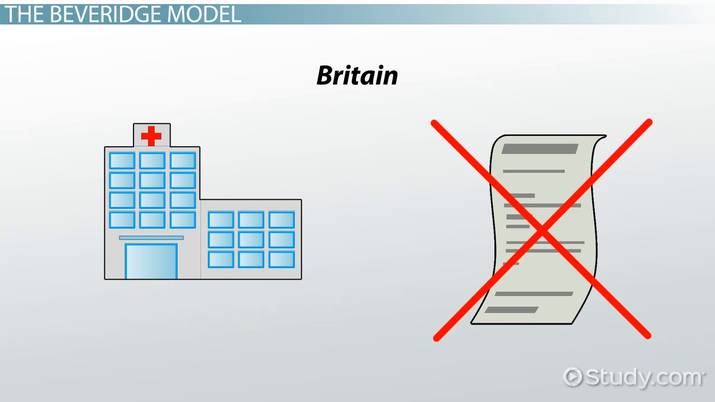 Kevin lives in Britain and recently got in a car accident. After several weeks in the ICU, he was released but referred to a physical therapist to help him rehabilitate. Upon leaving the hospital, he was not presented with a bill despite the extreme amount of medical care he received. This is because Britain follows the Beveridge Model.

The Beveridge model was created by social reformer, William Beveridge, who designed Britain's National Health System. With this model, the government is responsible for financing and providing health care through taxes. This means that if you are a British citizen and you need to see a doctor for some reason, you won't receive a bill. The reason behind this is that most doctors are government employees. Even the few doctors that are privately owned still collect their payments from the government. Since the funding comes from one source, the government has control over what doctors can charge. As a result, health care systems that follow this model tend to have low costs.

In the United States, the health care that veterans receive closely resembles this model as the government funds it through taxes. Other countries that have implemented this model alongside Great Britain include New Zealand, parts of Scandinavia, Spain, Hong-Kong, and Cuba.

Antoine lives in France and works at an accounting firm. He is responsible, along with his employer, for contributing to his insurance policy. He doesn't mind this because it is a relatively low cost and he still receives quality care. No matter what pre-existing conditions he may have, his insurance must take him, no questions asked. This is because France follows the Bismarck Model.

The Bismarck model was named after the Prussian Chancellor, Otto von Bismark, who implemented it during the unification of Germany. The system uses private insurance agencies, also known as sickness funds. They are run as nonprofits and are required to accept all citizens without discrimination. As a result, even though both employees and employers are contributing to an insurance policy, the insurance company is not benefiting financially.

In addition to Germany, France, the Netherlands, Belgium, and Japan have also adopted versions of this model. This model might also be familiar to people living in America because of the use of private insurance agencies. Many Americans receive health insurance through their jobs. The main difference between that and the Bismarck model is that American private insurance companies are for-profit businesses.

Min-Ji lives in South Korea and visits the doctor frequently. She was diagnosed with asthma at a young age, and it requires her to take a lot of medicine. Despite having to see a doctor on a regular basis, Min-Ji pays very little for her medical and prescription bills. Additionally, even though asthma is considered a pre-existing condition, it does not affect her insurance payments or policy in any way. This is because South Korea has based their system on the national health insurance model.

The national health insurance model is sometimes viewed as a combination of both the Bismark and the Beveridge models. Insurance companies are privately run, but payments come from a government program to which all citizens contribute. Consequently, there are no ulterior financial motives resulting in less administrative work and very low costs for medical care and prescription drugs. In fact, Canada implemented a version of national health insurance, and the prescription drugs are so cheap that many Americans have started crossing the border to buy them. Unfortunately, to keep costs down the Canadian government often limits the procedures they pay for or makes patients wait a really long time to have them done.

The portion of the United States health care system that resembles this model would be the Medicaid program. This program is funded by the federal government and the states and is offered to low-income, disabled, and elderly people either for free or a very low cost.

Chaya has lived in Cambodia all her life and has watched her grandchildren grow up to produce great-grandchildren. In her long life, she has seen a doctor only twice because it is very expensive, and she is forced to pay everything on her own. Though she has been lucky enough to live a long, healthy life, she has known many others who have not been as fortunate as her. This is because Cambodia follows an out-of-pocket model.

The out-of-pocket model is used by under-developed nations, which is a significant portion of the world. Many of these countries are unable to organize a health care system for their citizens due to poor economic situations, disorganization, or civil unrest. As a result, many go their whole lives without seeing a doctor because they are not available, or they are too expensive.

Even though this model is associated with developing nations, America has citizens that receive health care through this model, too. In 2013, 13% of Americans reported having no insurance at all. As a result, they were required to pay for their health care services on their own. Other countries with models similar to this include rural regions of China, Africa, India, and South America.

There are four different types of health care models. This includes the Beveridge model, the Bismarck model, the national health insurance model, and the out-of-pocket model. Each system is unique in the way that it is funded and organized. Some countries choose to adhere to just one of these systems, such as Great Britain, who uses the Beveridge Model. While other countries, such as the United States, use a combination of these models.

Mistakes to Avoid in Business Writing

The Health Care Delivery System: The US and Worldwide

How Information Technology is Changing Healthcare

Principles of Communication in Nursing

What is Public Health? - Definition & Principles