Casey will be 80 next year, but she's still active. She likes to go to football games and support her local college, and she plays bridge and eats lunch with her friends several days a week. All in all, she's enjoying her 'golden years.' But not everything is rosy. Casey has high blood pressure, which she has to take medication for, and arthritis, which can cause her pain and stiffness some days.

Casey is in late adulthood, which is the time of life after age 65. During that time, many people find that they struggle with health and health care costs more than they have at other times in life. Let's look closer at some of the health issues facing older adults and the health care facilities they can turn to for help when they need it. 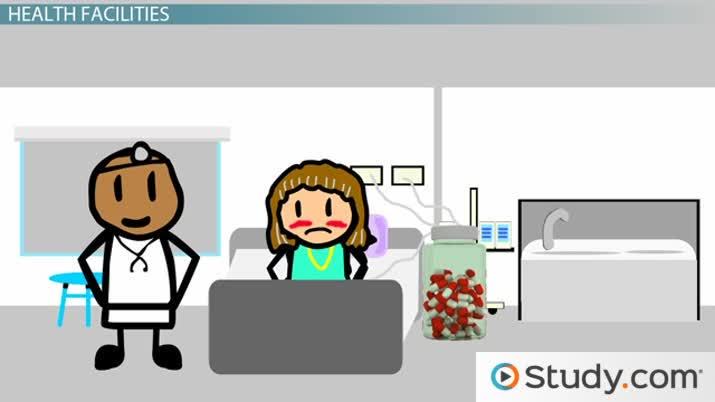 Try it now
Back
Coming up next: Psychosocial Theories of Aging

By and large, Casey is pretty healthy. Sure, she has to take blood pressure medication and she has arthritis that can cause her some pain and stiffness, but most days she feels just fine and healthy. Casey isn't alone. Most adults in late adulthood are healthy, though the majority have at least one chronic illness, or long-lasting medical condition that can be treated, but not cured. Casey's blood pressure and arthritis are examples of chronic illnesses.

Many people are surprised that when compared to younger adults, older adults experience acute illness less often. Acute illness is a medical condition with a sudden onset. For example, a cold or the flu is an acute illness. You get it quickly, but you also get over it quickly (unlike a chronic illness). So, people like Casey are less likely to get colds and the flu than younger adults.

But when older adults do get an acute disease, it is often more severe and longer-lasting than when people get it earlier in life. For example, when Casey was younger, she would get colds all the time. If it was going around the office or her kids' schools, Casey would end up with a cold. But she'd be better within a week. Nowadays, Casey rarely gets colds. But last year she caught one and ended up in the hospital with a severe respiratory infection! So even though she doesn't get sick as often, it's worse when she does.

Health care costs are a major part of older adults' budgets. Casey has to spend a lot of money on doctor visits and her medication for blood pressure and arthritis. That doesn't even include her hospital bills from last year! Lucky for Casey, she has enough money to cover her bills, but what happens when someone doesn't?

Older adults who cannot afford health care have higher incidences of physical and mental disorders, like depression. Further, some studies have shown that limited money for health care is linked with a shorter life span on average. So, Casey is lucky that she can afford to pay for her medical costs!

When Casey needs to go for a routine checkup, or when she has a minor illness, she goes to her doctor's office. This is where she can be examined by her doctor and he can give her a prescription for any medication she needs, like her blood pressure medication. Doctors' offices do not have overnight care; it's an outpatient facility, which means that the patient is seen and then goes home to continue treatment, without staying overnight. However, sometimes there's a need for an inpatient facility, which means that the patient stays overnight to be treated in the medical facility. Besides doctors' offices, the other three health care facilities common in late adulthood are inpatient facilities.

Hospitals are medical facilities where patients are treated for severe illness or injury. Hospitals provide both outpatient and inpatient care. For example, when Casey had the respiratory illness last year, she ended up in the hospital for a week, which meant that she received inpatient care. But when her friend Dorothy broke her wrist last year, she went to the emergency room of the hospital, where they did an X-ray and put a cast on the wrist and then she went home a few hours later. Dorothy received outpatient care.

Nursing homes are the second type of inpatient medical facility that are commonly used in later life. Nursing homes are long-term inpatient facilities; that is, they offer medical care just like a hospital does, but they offer it for longer periods of time. One of Casey's friends has dementia, or issues with brain functioning. She's not able to care for herself anymore and needs round-the-clock monitoring and medical help. But hospitals are designed for relatively short stays - a few days or weeks. Casey's friend will need medical care for the rest of her life, which could be years.

There's one other type of inpatient facility that many people make use of in later life. Hospice facilities are homes that offer medical treatment for the terminally ill. Usually, when someone enters hospice care, they are not expected to live more than a few months. A few years ago, Casey's husband was dying of cancer. When it got to be too much for Casey to care for him, he went into a hospice for the last few months of his life. When thinking about the difference between hospitals, nursing homes, and hospice facilities, think about the time that a person has to stay. Hospital stays are generally for a few days or weeks, hospice stays are generally for a few months, and nursing home stays can be for years.

Late adulthood is the time of life after age 65. During this time, many people find that they have a chronic illness, even if they are otherwise healthy. Older adults also have fewer acute illnesses than younger adults, but when they do get sick, it is generally more serious and longer-lasting. There are four types of medical facilities that older adults might use: doctor's office, which is an outpatient facility, and hospitals, nursing homes, and hospice facilities, all of which provide inpatient care.