View bio
Heat capacity is the ratio between the rise in temperature of an object and the amount of energy transferred to the object. Study the definition and equation of heat capacity, understanding heat, and the specific heat of an object. Updated: 11/02/2021
Create an account

What Is Heat Capacity?

Have you ever gone to the beach and noticed the sand is extremely cool in the morning and hot in the afternoon, while the temperature of the water doesn't seem to change at all? Both are subjected to the same amount of energy from the sun, but the different properties of water and sand cause them to react differently. One of the reasons for this phenomenon is that water has a much higher heat capacity than the sand, which simply means that it takes much more energy to raise the temperature of water than it does for sand. 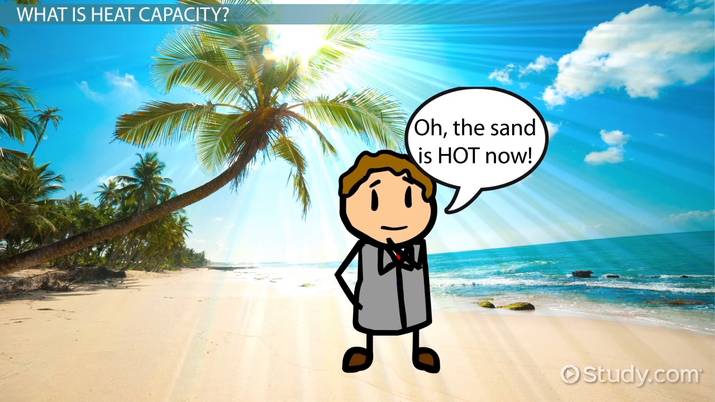 Try it now
Back
Coming up next: Heat of Fusion: Definition, Equation & Examples

To understand heat capacity, we must first understand heat. When we talk about heat, we're often referring to whether an object feels hot or cold. This is because heat is actually a form of energy that flows from objects of higher temperature to those with lower temperature. So if I touch a hot coffee mug, the mug will feel hot because the energy from the mug is being transferred to my cooler hand. Similarly, if I pick up a glass of ice water, the heat from my hand is flowing into the glass, making the glass feel cold.

Internal energy is the sum of kinetic and passive energy within an object compared to an object at rest. We already know that heat refers to the transfer of energy due to a temperature difference between objects. Thus, an object can contain internal energy but it cannot contain heat. Since heat is a form of energy, the SI unit for heat is the joule (J). Heat is commonly noted as Q in equations.

The heat capacity units are J / degree Celsius. Because the heat capacity of an object is dependent on the mass of the object, heat capacities are often given per 100 grams to allow for a comparison between objects of equal mass.

Since we're interested in Q, we must first rearrange the equation.

Returning to our beach example, the huge mass of water in the ocean is yet another reason why so much energy is required to change the temperature of the ocean water compared to sand on the beach.

Understanding the transfer of heat and how different substances behave during this process is a key concept in the field of thermodynamics. Heat is actually a form of energy that flows from objects of higher temperature to those with lower temperature. The heat capacity of an object can be thought of as how thermally insensitive a material is to the addition of heat. Heat capacity (C) is the amount of energy needed to raise the temperature of a specific substance by 1 degree Celsius. As we learned, water requires more heat to raise its temperature, which is reflected by a higher heat capacity. Finally, since the heat capacity is also dependent on the mass of an object, specific heat is a value that represents the heat capacity per unit of mass: the specific heat (c) of an object, which is the heat capacity of a substance per unit mass. In the future, when considering why objects respond in a certain manner to the addition or subtraction of heat, remember that this reaction is due to both their mass and their individual heat capacity.

Determine whether the following statements are true or false. To do this, print or copy this page on a blank paper and underline or encircle the answer.

1. Specific heat denotes the amount of heat required to raise the temperature of a substance per unit of mass.

2. Sand has a much higher capacity for storing heat energy than water.

3. Internal energy is defined as the energy associated with the random, disordered motion of molecules within an object.

4. The amount of heat required to change the temperature of water (with a heat capacity of 400 Joules/degree Celsius) by 30 degrees Celsius is 1200 Joules.

8. The amount of heat, Q, is directly proportional to mass and resultant temperature.

9. Heat capacity is defined as the amount of energy required to increase the temperature of a specific substance by 10 degrees Celsius.

10. In the International System of Units, Celsius is the derived unit of energy, work, and heat.

Calorimetry Measurement | How to Find the Heat Capacity of a Calorimeter

Law of Conservation of Energy: Lesson for Kids

Calorimetry Measurement | How to Find the Heat Capacity of a Calorimeter

Law of Conservation of Energy: Lesson for Kids