Convection occurs when a temperature difference happens between two parts of a fluid, liquid or gas, and the part of the fluid rises and the cooler part sinks. Learn more about heat transfer through convection, natural versus forced convection, and read examples. Updated: 10/31/2021
Create an account

Back when I lived with my parents, my bedroom was the hottest room in the house. My room was in the loft, above the hot water heating system. Even in the coldest weather, when the family was shivering in the living room, I was toasty warm up above them. Maybe you've noticed that rooms upstairs are very often warmer than downstairs. But have you ever wondered why?

It's not just rooms. Heat seems to work this way a lot. Let's say your room is in the colder part of the house, and you decide to make some soup to help warm you up. If you have a saucepan of boiling soup, are you more likely to burn yourself with your hand above the saucepan or alongside it? If you've ever cooked anything on the stove top, you'll probably know that it's much hotter above.

So why do these things happen? It's all because of convection.

Convection is a process where hot stuff rises, and cold stuff sinks to take its place. That stuff must be a fluid, either a liquid or a gas. If there's a temperature difference between two places, one below and one above, convection is likely to happen, and continue in a cycle. Unlike the other two types of energy transfer, conduction and radiation, convection involves the material itself moving on a large scale.

But why does that happen? What exactly does it mean to heat something up? Temperature is the average movement energy of the molecules in a substance. The faster they move, the hotter the temperature. When molecules move faster, they tend to spread out a little and take up more space. And if the molecules are more spread out, that means the substance is less dense.

What happens when you mix a dense material with a not-so-dense material? Try putting a cork at the bottom of a bucket of water. You'll find that it bobs up to the surface. Less dense materials float on top of more dense materials. This is part of why oil and water don't always mix well when you're cooking a stew.

The same thing happens with convection. Okay, back to your lunch: the stove top will heat the bottom of the soup more than the top. As the soup near the bottom gets hot, it'll get less dense and rise to the top. Now it's near the surface, it cools again and sinks. This repeats over and over, forming continuous convection currents in the soup.

My childhood bedroom was hot because heat rises in convection currents, and so a lot of the house's heat went right up to my room. 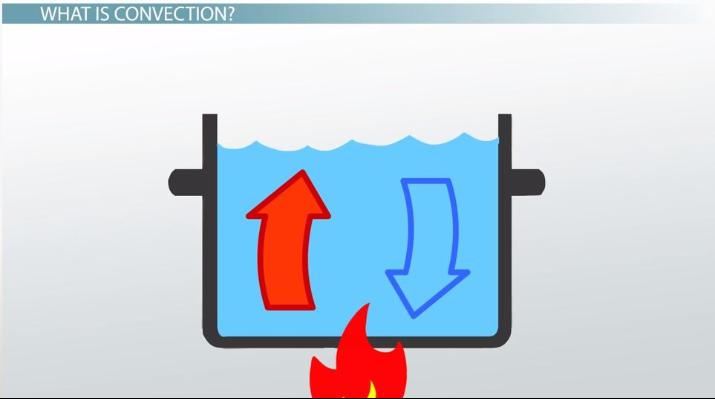 Coming up next: Radiation, Heat Transfer & the Stefan-Boltzmann Law

Forced convection occurs when you try to speed up the process of convection, by pushing the fluid along a bit. For example, you might push the air around with a fan. This is how fan ovens work.

There are many, many examples of convection in everyday life. But let's start with a nice one: relaxing on a lovely, warm beach. When you're lying on the beach, you get hot pretty fast. So you're always thankful to feel a nice, cool breeze. But have you ever noticed where those sea breezes come from? More often than not, they came from the sea, towards the land. But why is that?

Well, that's also because of convection. In the summertime, the air above land tends to be hotter than the air above the sea. The sea air is just harder to heat up. As the land air heats up, it rises like we've talked about, but this time it isn't the cooler air above that fills the gap. Instead, the cooler air out at sea gets sucked into the space the hot air left behind - sucked towards land. That's your nice, cool breeze.

We've talked about the sea air, but let's go deeper. Much deeper! Not under the sea, though they do say it's better down where it's wetter. Deeper than that. Let's go all the way down into the belly of the Earth itself. Deep below the surface, miles and miles below: in the outer core!

Convection happens here too. It's hotter the closer you get to the center of the Earth, and cooler further out... though, to be fair, it's insanely hot everywhere! Nevertheless, this temperature difference is enough for convection currents of liquid metals to flow even here. And thank goodness they do!

These liquid metals contain charged particles, and the movement of those charged particles gives the Earth its magnetic field. Without it, the Earth wouldn't be able to push dangerous radiation from the Sun out of the way. Without it, we humans wouldn't survive long at all. Not to mention Captain Cook would have had real trouble exploring the Pacific -- it's hard to navigate if your compass no longer works!

But finding the heat transferred, Q, might involve another step. When we add heat to a material, one of two things can happen: it can change the temperature, or it can change the state (otherwise known as phase) by melting or boiling.

If the heat is being used to change the temperature, we can use the Q = mc(delta)T equation. Plug in the mass being heated, m, measured in kilograms, the heat capacity of the material being heated, c, which is just a number that you should be given in the question, and the change in temperature, (delta)T. Multiply them together, and you get your heat transferred, Q.

But let's say the heat isn't being used to change the temperature of the material, but instead is being used to change the state, like melting or boiling. In that case, you can use the Q = mL equation to figure out the heat transferred. Here, all you need to know is the mass of the substance being heated and the latent heat. The latent heat is just a number that varies depending on the material, and what state change is happening. You should be given it in an exam question.

So let's go through a calculation example. A house contains 500 kg of air at any one time. The heating system has been turned on, and needs to increase the temperature of the house by 5 degrees Celsius. If it takes 600 seconds to do this, how much energy is used per second in the process? (Note: The average specific heat capacity of air is 1000 J/kg C.)

Okay, so let's think about what we need to calculate. It's asking for the energy per second. In this case, how much heat energy is transferred every second. So this is Q/t. We already know how long it takes: 600 seconds. But we need to figure out Q, the amount of energy transferred. This question involves a temperature change, so we should use Q = mc (delta)T. We have the mass, the specific heat capacity, and the change in temperature. Plug those numbers in: 500 times 1000 times 5, and we get 2,500,000 Joules. That's our value of Q. Now to figure out the energy per second we find Q/t, which is 2,500,000 divided by 600 seconds. That gives us 4167 Joules per second, or 4167 Watts.

Convection is caused by a temperature difference between two parts of a fluid (a liquid or a gas). In convection, the hot dense part of a fluid rises, and the cooler part sinks. This cycle repeats, and is why heat rises - why it's so hot above a saucepan of boiling soup, and why the upstairs of a house tends to be warmer than the downstairs.

Natural convection is where processes just happen on their own whenever there's a temperature difference between two places. Forced convection occurs when you try to speed up the process of convection, by pushing the fluid along a bit. For example, you might push the air around with a fan.

You can calculate the heat transferred by convection per second if you have enough information. You need to be able to figure out how much heat is transferred (Q), and know how much time it took to happen (t). Then divide one by the other (Q/t).

Convection in Science: Examples | What is Convection?

Hysteresis Loop & Effect | What Is Hysteresis?

What is Conduction? | Examples of Conduction in Science