At the young age of 26, a German physicist named Werner Karl Heisenberg published a landmark paper describing his theory of the uncertainty principle. Based on this work, in addition to his earlier theories that lay the groundwork of quantum mechanics, Heisenberg was awarded the Nobel Prize in Physics in 1932.

To understand why this work was deserving of the Nobel Prize, let's dive in a little deeper. Quantum mechanics is the area of physics that examines physical behavior at the nanoscopic scale. There are 1 billion nanometers in a meter. Particles at this scale, like individual atoms and molecules, are so small that they are impossible to image. This is what makes the field of quantum mechanics so difficult and so crucial. Because we cannot directly observe physical behaviors at this scale, they are exceedingly difficult to understand and predict. 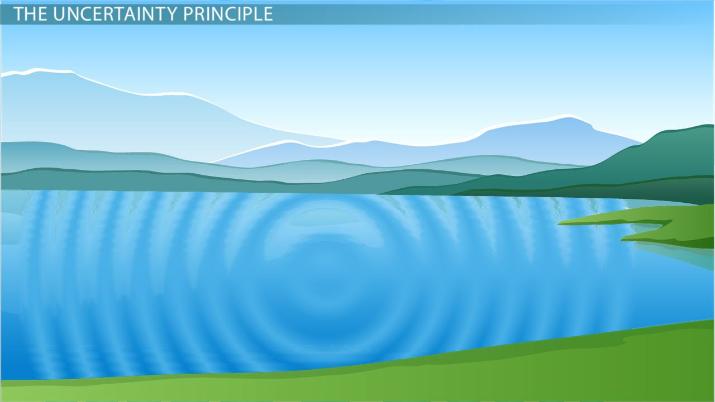 Coming up next: The de Broglie Hypothesis: Definition & Significance

The Heisenberg uncertainty principle relates to how well we can know the position and the momentum of a nanoscopic particle with certainty at the same time. Remember that momentum is the mass times the velocity of a particle. Heisenberg summarized his uncertainty principle as the more precisely the position is determined, the less precisely the momentum is known, and vice versa. What this means is that you cannot accurately know BOTH the location and momentum of a nanoscopic particle.

You may have heard the Heisenberg uncertainty principle in popular media described as an observer effect. This refers to the changes that a particle undergoes as a result of being observed, or, put more simply, that the act of observing something changes it. The classic example is that if we try to measure an atom by using a super powerful gamma ray microscope, the gamma rays of the microscope would actually disrupt the tiny atom, making it impossible to image.

But the Heisenberg uncertainty principle is more complicated than this. It derives from the fact that all matter behaves as a particle and a wave. While particles have fixed locations, waves are disturbances that travel through space accompanied by a transfer of energy and do not have a fixed location. Think of the waves that form when you drop a rock in a puddle. We can describe certain features of the wave like wavelength, which is the distance between two successive wave peaks, but there is no actual location of the wave because it is always moving.

Wavelength is directly correlated with momentum. An object with a large mass and a high velocity, like a moving car, has a huge momentum. Because the momentum is so large, the wavelength is very short. Thus, we can state that objects with high momentums have very small wavelengths. In the case of visible matter, the wavelength is always small, and that's why we can't observe the wave-like behavior. However, when we're dealing with very small nanoscopic particles, the mass, and thus the momentum, are exponentially smaller. This means that the wavelengths for nanoscopic particles can be larger.

So in its wave-state, we can determine the momentum of matter from its wavelength, but not the position. But remember that matter behaves both like a wave AND a particle. Particles, of course, have a known position, but they don't have momentum because they do not have a wavelength. This is the root of the Heisenberg uncertainty principle. To know both the position and momentum of nanoscopic particles, we must observe both the particle and wave behavior of the matter.

You see that, if you multiply delta x and delta p, they must be greater than h over 2*pi. H in this equation is Planck's constant, which is the subject of an entirely different lesson. But we'll simplify it by saying that it's the constant that describes the relation between energy and wavelength and is a very small number. Since it's a constant, this means it's a value that we can look up and insert into the equation.

While we can observe both the position and momentum of something like a baseball, quantum particles are so small that we have great difficulty measuring and understanding their behavior. The Heisenberg uncertainty principle relates to how well we can know the position and the momentum of a nanoscopic particle with certainty at the same time. We learned that all matter exhibits behavior both like a particle and a wave. Particles have fixed, measurable locations, while waves have many locations that cannot be fixed, but measurable momentums. If we are trying to measure both position and momentum, we are measuring the two contradictory behaviors of the matter, which creates the uncertainty in measurement.

We learned that the uncertainty between position and momentum is defined by the equation in the previous section. This equation provides the limit of how well we can simultaneously know the position and momentum of a particle with certainty as the Planck constant over 2*pi. This provides a mathematical definition to describe the fact that the better we know the position of a nanoscopic particle, the less we know the momentum with certainty, and vice versa.

The Wave Nature of Matter