Stacy has taught college English and has a master's degree in literature.

Published in 1854 by Henry David Thoreau, Walden is one of the most prominent pieces of transcendentalist American literature. Discover Thoreau's motivations for writing Walden, as well as the main themes of the book. Updated: 08/23/2021
Create an account

Thoreau's Walden: An Exercise in Solitude

Today, many Americans don't have very positive associations with someone who spends a year alone in a cabin he built himself. However, when Henry David Thoreau did that in the mid-19th century, it inspired one of the greatest works of American literature to date.

Published in 1854, Thoreau's Walden is one the most prominent works of transcendental literature. The book was originally titled Walden; Or, Life in the Woods and chronicles the two years that Thoreau spent in a cabin on the property owned by his friend and fellow transcendentalist writer Ralph Waldo Emerson. The cabin was near a body of water called Walden Pond. Thoreau's book made Walden Pond so famous that today it's often used to signify any beautifully natural serene scene, the same way someone might refer to any large, opulent house as the Taj Mahal.

Though the cabin was only a couple of kilometers from town (Concord, MA), Thoreau considered it as a place of true introspection, a place to commune with nature and be completely self-reliant, all central notions to the transcendental literary movement in the US. The book is also a spiritual journey, which seems to be popular fodder for books these days: think Eat Pray Love or Wild, the memoir about a woman who hikes the Pacific Crest Trail by herself in order to fix her broken life.

Holing up in a cabin by yourself for two years probably doesn't sound too appealing to many of us, but instead of trying to sell you on the validity of the idea, I'll let Thoreau explain it himself. He says:

I went to the woods because I wished to live deliberately, to front only the essential facts of life, and see if I could not learn what it had to teach, and not, when I came to die, discover that I had not lived. I did not wish to live what was not life, living is so dear; nor did I wish to practice resignation, unless it was quite necessary. I wanted to live deep and suck out all the marrow of life, to live so sturdily and Spartan-like as to put to rout all that was not life, to cut a broad swath and shave close, to drive life into a corner, and reduce it to its lowest terms, and, if it proved to be mean, why then to get the whole and genuine meanness of it, and publish its meanness to the world; or if it were sublime, to know it by experience, and be able to give a true account of it in my next excursion. 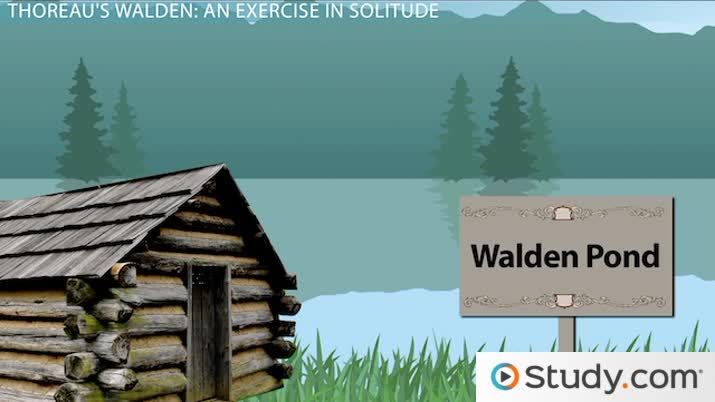 Try it now
Back
Coming up next: Henry David Thoreau's Civil Disobedience: Summary and Analysis

It seems like Thoreau thought that by cutting out interaction with other humans and the modern conveniences (or what was considered modern in the 1850s), Thoreau thought he could get down to the true essence of what living really meant. Instead of writing a book that speculated about the meaning of life, he was hoping to know it from experience - a seriously lofty goal.

You might think a book with such an ambitious aim would be difficult to read, and you would be right. Thoreau's language is not terribly accessible, and he frequently uses irony, witticisms, and satire to make his point, and it can be difficult for a reader to tell when he's being serious and when he's not. The book is divided into several chapters, with names like 'Economy', 'Solitude', and 'The Bean Field', and those chapter titles serve as helpful guideposts throughout the book, if you're having trouble following Thoreau's point.

In those chapters he addresses many of the questions one might ask when they hear someone has spent two years living alone in a cabin, like:

There are many recurring themes in Walden. Some of the most prominent include:

In summary, Henry David Thoreau spent two years, two months and two days in a cabin outside Concord, Massachusetts, near a place called Walden Pond, because he wanted to understand himself and be completely self-reliant. He documents his experiences and observations in the American classic Walden. Though Walden champions simplicity and rejects materialism and modern technology, it's important to note that at the end of the book, Thoreau has declared his experiment over and is back living in the modern world again.

Expectations & Standards for Professionalism at Work

Mark Twain Biography & Works | What is Mark Twain Known For?

Romanticism Overview & Characteristics | What was the Romantic Era?

Expectations & Standards for Professionalism at Work

Mark Twain Biography & Works | What is Mark Twain Known For?

Romanticism Overview & Characteristics | What was the Romantic Era?