Physicist Henry Moseley discovered the atomic number of each element using x-rays, which led to more accurate organization of the periodic table. We will cover his life and discovery of the relationship between atomic number and x-ray frequency, known as Moseley's Law.
Create an account

Who Was Henry Moseley?

Henry Moseley (November 23, 1887 - August 10, 1915) was an accomplished physicist that contributed to atomic theory, whose life and career were cut tragically short when he was killed in World War I. Had he lived, he most likely would have won a Nobel Prize for his work showing that the periodic table is best organized by atomic number. Isaac Asimov has been widely quoted as saying that Moseley's death was 'the single most costly death of the war' because of what he might have gone on to accomplish. 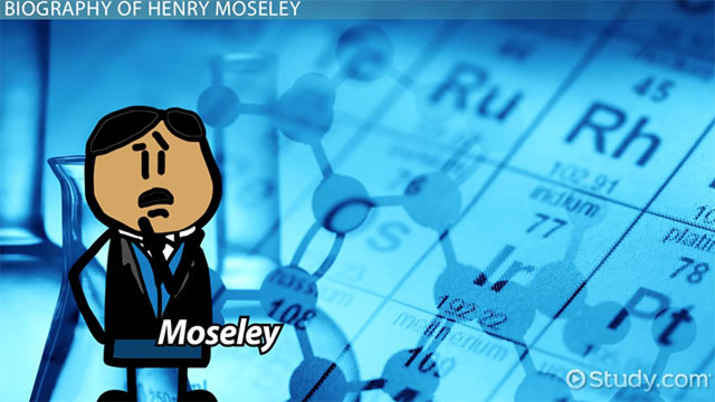 Henry Moseley, called Harry by family and friends, was born on November 23, 1887 in Dorset, England. His father, Henry Nottidge Moseley, was a biologist and part of the Challenger Expedition, which laid the groundwork for much of modern oceanography. His mother, Amabel Gwyn Jeffreys Moseley, was the daughter of a mollusk biologist. Moseley spent much of his childhood exposed to science, often exploring the countryside with his sister and keeping track of whatever plants and animals they found in a catalogue.

Moseley never lost his enthusiasm for discovery and went on to study physics at Oxford University, earning his bachelor's degree in 1910. It was here that he developed his experimental skills before continuing his studies in the laboratory of Ernest Rutherford at Victoria University of Manchester. Ernest Rutherford was one of the greatest physicists of his - or any - time and could provide a fertile environment for a promising scientist.

In Rutherford's lab, Moseley began by studying radioactivity. However, this never quite captured his interest, and he soon decided to investigate x-rays instead. Moseley was a brilliant experimentalist but wisely decided to get some help when it came to the complicated mathematics involved in studying x-rays. For this reason, he started a collaboration with C.G. Darwin, mathematician and grandson of Charles Darwin.

In July 1913, a conversation with physicist Niels Bohr led to the suggestion that an element's atomic number could be determined by x-ray spectroscopy. In x-ray spectroscopy, electrons are fired at a metal plate, causing the atoms of metal to emit x-rays. The wavelength and frequency of these x-rays are then recorded.

Henry Moseley collected the x-ray spectra of a variety of elements and found that the frequency of x-ray radiation has a precise mathematical relationship to an element's atomic number. This relationship is now called Moseley's Law and allowed scientists a new, more accurate way to organize elements. His method was so accurate that it predicted the existence of elements that hadn't been discovered yet. In fact, it took scientists 30 years to fill in all of his predictions.

When World War I broke out, Henry Moseley was in Australia for a meeting of the British Association of the Advancement of Science. When he heard the news of the war, he decided to cut his visit short and enlisted as a volunteer in the British Army's Royal Engineers, against the advice of family, friends, and colleagues. Then, on August 10, 1915, Moseley was killed in Sarajevo by a gunshot to the head. He was 27 years old at the time, and his career had only lasted 40 months. During those months he'd accomplished more than most scientists do in a lifetime, and it's saddening to think of what he could have discovered had he lived longer.

Early versions of the periodic table were less than exact in their placement of elements. In the late 18th century, Antoine Lavoisier categorized them by properties as either gases, metals, non-metals, or earths. As scientists obtained more accurate atomic weights and new elements were discovered, the periodic table began to more closely resemble the one we have today. Dimitry Mendeleev, a Russian chemist and creator of Periodic Law, organized the elements by atomic weight and properties in 1869. His table formed the basis for the one scientists still use.

Henry Moseley was an English physicist who contributed to atomic theory and lived from 1887 to 1915. His work with x-ray spectroscopy, in which electrons are fired at a metal plate, causing the atoms of metal to emit x-rays, allowed us to accurately measure the atomic number , which tells us the number of protons in an atom of any given element, of each element. In his research he coined Moseley's Law, which is: the frequency of x-ray radiation has a precise mathematical relationship to an element's atomic number.

His research adds much to the work done by Dmitri Mendeleev, a Russian chemist and creator of Periodic Law who organized the periodic table by weight and properties, because it also showed that organizing elements by atomic number on the periodic table is the most accurate and reliable way to do so. This is because an element's atomic number tells us the number of protons in its nucleus and that number never changes, which takes care of the problem brought on by isotopes, which have different numbers of neutrons.