In the High Middle Ages, people questioned the Church's role in their lives, which led to accusations of heresy and retaliating inquisitions. Discover this transformative period in Europe, delving into heresy, the Church's power, the Cathars, and inquisition. Updated: 10/25/2021
Create an account

What exactly is a heresy? The word has been applied to different groups, but our main concern is its meaning in Christianity. Among Christians, heresy meant a disagreement with the current Christian doctrine. A person who consistently held this disagreeable opinion was called a heretic. Before the High Middle Ages, between the 11th and 13th centuries, heresy had mostly occurred infrequently. But, beginning in the 11th century there were a lot more urban cities. The cities did not hold the same religious values as the rural areas, and heresy became a common accusation. 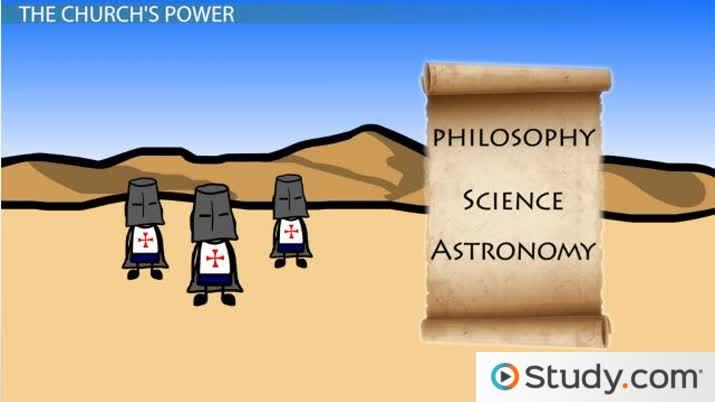 Coming up next: The Spread of Ancient Knowledge and Its Impact on the Church

During this time, the popularity of Christianity spread. It reached areas like Scandinavia, Poland, Bohemia, Hungary, Serbia, Bulgaria and Russia. Groups, like the Danes and the Vikings, were also moving to areas that were already predominantly Christian, like Normandy and England. These groups began to adopt Christian ideals and practice Christian rituals.

As Christianity's popularity grew throughout the world, the power of the Catholic Church increased. At this time, Christian churches were Catholic. Protestant churches, like Lutherans, Presbyterians and Baptists, didn't exist until after the Reformation in the 16th century. All of these churches across Europe reported to the same governing power: the pope.

Because the pope was so powerful, the clergy held a strong influence in the secular world with nobles and royalty. In the 11th century, the pope called for a crusade. A crusade is a holy war. This particular holy war was in the interest of gaining control of the Holy Land in the Near East. When crusaders flocked to this area, they discovered ancient manuscripts left by the Ancient Greeks and Romans.

Classical knowledge is knowledge of philosophy, science and astronomy in the ancient cultures around the Mediterranean Sea. Until the Middle Ages, classical knowledge was reserved for those who could read and write. This means that knowledge was heavily limited to the clergy and monks, who copied these texts to preserve them as treasures, but not to spread knowledge.

As the population increased in Western Europe due to advances in technology and agriculture, there was a higher need for literate people to help keep records. Churches could no longer handle the growing need for education, and schools began to develop. Schoolmasters taught science and philosophy based on the classical manuscripts to many people. Students were encouraged to discuss this knowledge and exchange ideas. Although some scholars, like Thomas Aquinas, attempted to link classical philosophy with church doctrine, the spread of classical knowledge led to a deeper understanding of the church's place in society. There was a growing dislike of the church's power in secular matters, as well as the immense wealth and the corruption it created.

Sometimes heretical beliefs became popular enough to see the formation of sects. One of these sects was known as the Cathars, or Albigensians. This group was popular in the 12th and 13th centuries in Italy and parts of southern France. Cathars were dualistic, meaning they believed in good and evil. They associated good with things that were spiritual and intangible, while they associated evil with things that were tangible. Cathars didn't acknowledge the sacraments performed by the Catholics, and didn't accept the physical birth and death of Jesus. They were very dissatisfied with the wealth of the Catholic Church and the large cathedrals they built.

As we learned previously, heresy before the Middle Ages wasn't a huge problem, so the church didn't have a formal procedure for dealing with heretics. Because the popularity of the Cathars had grown so huge in the 12th century, the church had to form a formal position against heretics. They even began military assaults against Cathars.

Pope Innocent III declared a crusade, or a holy war, against the Cathars in 1209 and succeeded in dissolving much of the group in France. Afterwards, the Inquisition occurred to root out any other Cathars and eliminate their practices. The Inquisition was the Catholic Church's weapon against heresy.

There were two main actions of the Inquisition. The first was to publish a list of books that were considered heretical, which Christians were forbidden to read. The second was to prosecute people who they believed were guilty of heresy. Those found guilty could be sentenced to execution, which usually meant to be burned alive. The Inquisition was a danger to anyone accused of heresy.

In the High Middle Ages changes were common in Western Europe. The population was growing and people were becoming more educated as a result. Urban cities also began to develop. As more people outside of the church began to receive a secular education, including reasoning and the ideas introduced by ancient Greek philosophers, they became more aware of and unhappy with the power and corruption in the church. Those who spoke out against the church or its doctrines were accused of heresy. Groups of heretics with similar beliefs formed.

The Cathars were one of the largest heretical groups. Pope Innocent III felt threatened by their growing number of followers and declared a crusade against them. After the crusade, many were also put on trial in front of the church. If found guilty, they could be executed. This Inquisition was a violent attempt of the church to reclaim its authority over people.

After finishing this video lesson, you should recognize that during the High Middle Ages, people were becoming more educated and questioning of the Church's wealth and grip on their lives. You'll better understand the fact that the Catholic Church used the accusation of heresy and the Inquisitions to keep the populace in line.

The Western Schism and the Tale of 3 Popes

The Counter-Reformation: How the Catholic Church Revived

The Spread of the Protestant Reformation Across Europe

Humanism in the Renaissance: Recognizing the Beauty of the Individual