Richard teaches college writing and has a master's degree in creative writing.

Heteronyms are words that have the same spelling but different meanings and pronunciations. Learn about the definition of heteronyms and explore common examples of heteronyms. Updated: 10/03/2021
Create an account

Definition of a Heteronym

Chances are you've come across the word 'homonym' in your studies. Homonyms are words that sound alike but have different spellings. A classic example, which haunts grammar teachers and copy editors to this day, can be found in the words 'their,' 'they're,' and 'there.' Still, homonyms aren't the only tricky words to look out for.

In this lesson, we'll be taking a look at the term 'heteronym,' a close relative of the homonym. Unlike homonyms, however, heteronyms are words that have the same spelling but sound different. An easy way to remember the difference between heteronyms and homonyms is to look at the prefixes, meaning the first part of the word. The prefix 'hetero' means 'different,' and the prefix 'homo' means 'the same.' So, remember, homonyms have the same sound and heteronyms have different sounds. 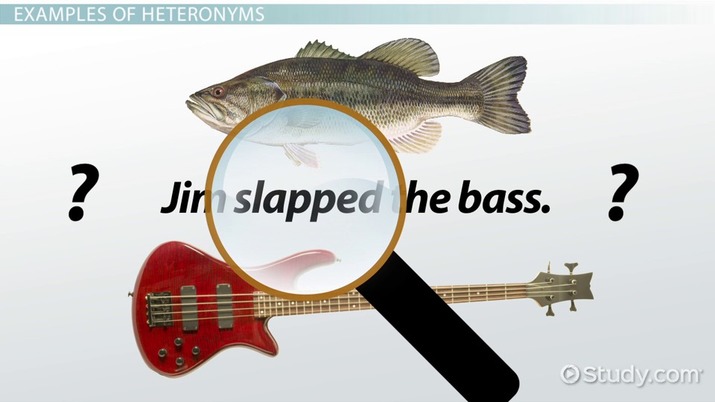 Coming up next: Homer of Ancient Greece: Mythology & Poetry

Now that we've defined what a heteronym is, let's look at a common example of one. Consider the sentence, 'Jane read the book.'

Now, let's make a very slight change to our example sentence: 'Jane, read the book.' As you can see, the only thing that's different is that there is now a comma after the word 'Jane.' Still, this changes the meaning of the sentence a great deal. Instead of describing in the past tense the action of Jane reading the book, the sentence is now telling Jane to read the book. Because the sentence is talking directly to Jane, this kind of sentence is known as direct address.

More importantly, the correct pronunciation of 'read' has also changed. In this version of the sentence, the word 'read' is no longer in the past tense. Rather, whoever's speaking this sentence is ordering Jane to read the book 'right now.' Therefore, the word 'read' is in the present tense.

The key to figuring out a tricky heteronym like this is to look for clues in the information that surrounds a heteronym. This kind of information that's around a word or sentence is known as context. At the moment, our example sentence doesn't really have any context. So, let's add some. Here is one version of the sentence: 'Jim slapped the bass as he reeled it in.'

Unless Jim has caught a musical instrument on his fishing line, then it's very likely that the word 'bass' in this sentence refers to a kind of fish. Consequently, the correct pronunciation of the word 'bass' should rhyme with the word 'glass.' Now, let's look at another version of the example: 'Jim the slapped the bass while Susan played a guitar solo.'

Once again, unless you chose a more surreal interpretation of the sentence (i.e., Jim is playing a fish as an instrument), it's pretty clear which meaning of the word 'bass' is correct. Because the word 'bass' refers to an instrument in this sentence, the pronunciation of 'bass' should rhyme with the word 'ace.'

Now, let's quickly go over what we've learned about heteronyms. Heteronyms are words that sound different but are spelled the same. For example, the present tense form of this word 'read' is pronounced as 'reed,' whereas the past tense form is pronounced as 'red.' In many cases, the grammatical rules of a sentence (tense, verb conjugation, etc.) will tell you how to pronounce a heteronym. In more challenging cases, however, you must look for information around the word or sentence, the context that surrounds the word.

Adverbs of Frequency Overview & Examples | What Is the Function of an Adverb?

Word Stress Overview & Examples |What is a Stressed Syllable?

Pie Chart Definition & Examples | What is a Pie Chart?

What is a Homophone? | Homophone Characteristics & Examples

What are Idioms? - Lesson for Kids

Phoneme Examples & Segmentation | What is a Phoneme?

What is an Antonym? | Meaning & Examples