How does an organization's structure impact the organization? In this lesson, we'll look at hierarchical and adaptive organizational structures, including what they are and some key benefits of each.
Create an account

Youssef is the owner of a growing consulting firm. As his company expands, he wonders whether it's best for all of his employees to report up a chain to him or if it's better for people to work in teams that are more horizontal, rather than vertical.

To help Youssef understand organizational structure and its impact on companies better, let's take a look at the two most common structures: the hierarchical model and the adaptive model. 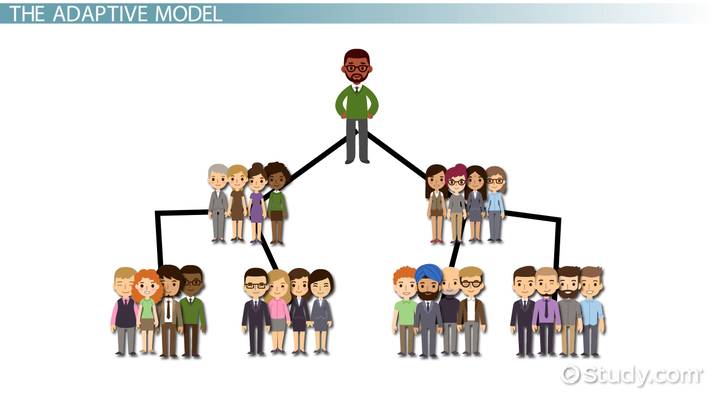 Coming up next: The Boundaryless Organization: Structure and Advantages

In every company Youssef has worked at, people have had a chain of command that means that every worker has a boss all the way up to the CEO. This is the hierarchical model, or hierarchical structure, of organizations, and it's the more traditional one.

Oftentimes in the hierarchical model, each team is like a silo that specializes in something. For example, Youssef might have a customer service department that focuses on keeping current customers happy. He might also have a sales team that focuses on bringing in new customers. These two departments, while similar, may have very little contact with each other. Instead, the customer service reps report to the head of that department, and the salespeople report to the head of the sales department. The managers of each of those departments then might report to Youssef.

The major benefit of the hierarchical model is control. By having everyone report up the chain, the ultimate decisions made lie with the person at the top of the organizational chart, in this case Youssef. The end result is that there's a strong system of control that allows everyone to know who to talk to and who makes which decisions.

The hierarchical model is what Youssef knows because that's what he's always been exposed to. But he's heard that there's a different type of organizational structure, too, and wonders if it might be worth exploring.

An alternative to the hierarchical model is the adaptive model, or adaptive structure. This is when companies are organized horizontally rather than vertically. In an adaptive model, instead of everyone reporting up a chain of command, people work in teams that don't specialize.

How does an adaptive model work? Well, let's go back to Youssef's company for a moment. Remember that he has some customer service reps and some salespeople, as well as consultants and other types of employees. You'll remember that, in a hierarchical model, these employees would be in silos. The customer service reps would work on a team together, the salespeople would work in another team, and so on.

But let's take a different approach. In an adaptive model, teams are assembled to address specific challenges. For example, let's say that Youssef wants to build on the consulting work that his company does for colleges and universities. He might assemble a team to work on that. The team might include a customer service rep who works closely with their existing college clients, a sales rep who is reaching out to new colleges and universities, and some educational consultants.

In an adaptive model, then, instead of having everyone working in a department and reporting up to the head of the department, teams are constantly shifting and reassembling as needs arise in the company. This gives a company an advantage of being able to change as the company grows and new challenges pop up. In other words, this model allows companies to adapt, hence the name.

Besides the ability to adapt, this model has a few other advantages. The adaptive model lends itself more to creativity and innovation, and most people who work in an adaptive organization report higher job satisfaction. However, the hierarchical model is easier to coordinate.

Let's review what we've learned. Organizational structure is the way a company is organized. It centers on the chain of command, or who employees report to. The hierarchical model, or hierarchical structure, of organizations is the traditional structure. It's based on a hierarchy where everyone reports up the chain of command and teams are in silos that specialize. This model has the major benefit of being easy to coordinate and control.

An alternative to the hierarchical model is the adaptive model, or adaptive structure, which is when companies are organized horizontally rather than vertically. In an adaptive model, instead of everyone reporting up a chain of command, people work in diverse teams assembled to address specific issues or goals. This structure allows companies to quickly adapt to change and can lead to creativity and innovation.

Impact of Technology on Structure & Design of Organizations

What Is a Flat Structure in an Organization? - Definition, Advantages & Disadvantages