Fred has mastered differentiating when a function has only one variable. Somehow, he missed the lessons on partial differentiation. He's starting to panic because the current homework deals with higher-order partial derivatives.

In this lesson, we review partial differentiation by using examples. Then, we extend the method to higher-order partial derivatives. Let's zoom in on Fred to see what he's currently trying to figure out.

Let's write the derivative of x4a - x3b as a partial derivative:

The a and the b are constants. When taking the partial derivative with respect to x, everything other than x is a constant. So we could write:

and y6 and y5 are treated as constants. So, the answer is still the same except the a and b constants are more specific. The answer is now x4y6 - x3y5. Thus, if f(x, y) is the function:

and y6 and y5 are treated as constants

Of course, we can also have a partial with respect to y where everything else is constant. To do these kinds of derivatives, you develop a selective focus with your eyes. You ''see'' the y as the variable and the x4 and the x3 as constants.

And this is pretty much the idea with partial derivatives. You just have to be careful with the ''with respect to'' part. Fred is ready to move on to higher-order derivatives. 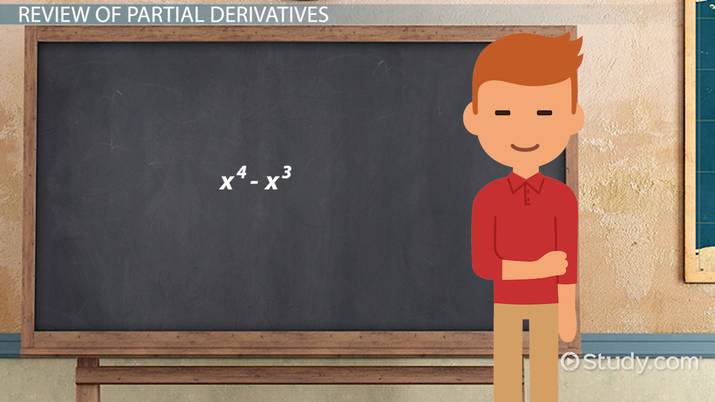 Coming up next: Tangent Plane to the Surface

and read this as the second partial with respect to x. This is called a second-order partial derivative. Using the example for f(x, y), here are the details:

For practice, we ask Fred to work on the second partial with respect to y of f. The details:

Fred is overjoyed at his success with higher-order partial derivatives. But wait, there's one more item to check out.

If the function is continuous over x and y, then the mixed partial will be the same using either order. Fred is completely content and ready to try the quiz questions. But first, some more examples.

First, let's take the partial derivative of f with respect to z:

Do you recall? As we can see, this partial with respect to z is now ez + x cos z.

Then, compute the partial squared with respect to z2:

We are looking to calculate:

Let's start with the partial with respect to z:

Then, take the partial derivative with respect to x, which is:

Tangent Plane to the Surface

The Chain Rule for Partial Derivatives

How to Determine the Eigenvalues of a Matrix