If you've never read Hemingway's 'Hills Like White Elephants' or if you want to refresh your memory, there's no better place to start than right here! In this lesson, you'll get a synopsis of the short story and a closer look at its characters and setting.
Create an account

Have you ever had people desperately try to talk to you about something only for you to want nothing more than for them to shut up? Maybe it's something you don't want to think about or perhaps you're just tired of hearing it. The protagonist in Ernest Hemingway's 'Hills Like White Elephants' - identified only as 'the girl' - actually shares both sentiments at the same time.

Published in 1927 both independently and as part of Hemingway's anthology, Men Without Women, 'Hills Like White Elephants' opens on a traveling couple taking a stop at a railroad junction between Barcelona and Madrid. Initially, the two, introduced as the American and the girl, have a nonchalant chat about the heat and what sort of adult beverage they should order.

As the presumable couple sits down with their beers, it seems that the story is going to be an account of a pleasant afternoon of vacationing lovers waiting for a train. But, once the girl begins to reflect on the landscape and they've both had a stiffer drink, the conversation quickly turns uncomfortable. After the girl comments pointedly on the bitterness of their last drink, the American abruptly interjects with reassurance that 'It's really an awfully simple operation.' Through the context of their dialogue and the thematic elements Hemingway includes, it eventually becomes clear that the American and the girl are talking about the prospect of an abortion.

The American continues to try to reassure the girl: letting her know the procedure is simple and safe (it really wasn't safe at that time). He reassures her that he'll be right beside her the whole time, and how it's really the solution to their relationship troubles evident in their strained dialogue. The girl also tries to put her two-cents in, using the fertile landscape on the other side of the tracks as a metaphor for the life they could have as a family. The American, still pretending to be supportive, continues to push the issue of abortion until the girl begs him to stop talking. Momentarily silenced, the two drink their last beer before the American carries their bags to the platform in preparation for the train soon on its way. 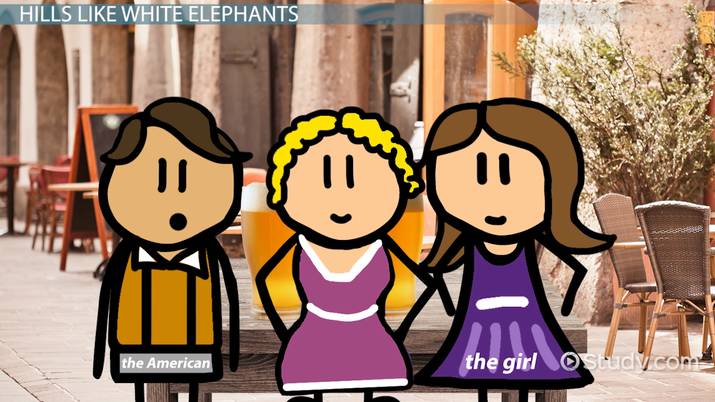 Aside from 'the woman' who brings the couple drinks and is only seen a few times, the American and the girl are the only characters who ever say anything. Neither is ever given a formal name - perhaps an attempt by Hemingway to make the characters more relatable to his readers.

Though we may not be able to simply label the American as the story's antagonist, we can certainly tell that he does do a fair amount of antagonizing. He constantly brings up the procedure throughout the story, trying to disguise his urgency to be rid of the child with fake concern and support.

Eventually, it's completely evident that his motives are entirely selfish. He claims that he wants her to have the operation because the pregnancy is 'the only thing that bothers us,' demonstrating that he's not actually concerned with her point of view at all. This is especially true since he's taken it upon himself to speak for the both of them. Ultimately, the American is an insecure and manipulative man who wants to maintain control over the girl by remaining the sole object of her attention and affection.

We can consider the girl the protagonist of 'Hills Like White Elephants' because her point of view is the one most clearly established. Obviously, this mother-to-be is facing a difficult situation: she's been given a choice that she really doesn't have the authority to make. She clearly wants to keep the child - a point made evident through several comments she makes regarding how the couple really could have it all. And there's the other side of her dilemma: she also wants to stay in a happy relationship with the American, but having the child would apparently jeopardize that due to his unwillingness to even consider it an option. Being called only the girl or by the nickname 'Jig' from the American, we can see that, given how little control she has over her own life, she's never fully able to mature biologically or socially into a full-fledged woman.

This short story is set at a lonely railway station along the Ebro River that runs through northeastern Spain, where Ernest Hemingway spent a considerable amount of time during the early 20th century. The varying landscape on either side of the tracks - barren and free of shade on one and abundantly fertile on the other - is actually one of the keys to understanding the underlying theme in 'Hills Like White Elephants.' Particularly rugged or dramatic landscapes like these were favorite features in Hemingway's short stories and novels, and Spain had plenty to offer. From all his time spent there, Hemingway held a long-standing fascination with Spain, and the country provides the setting for several others of his most famous works, including The Sun Also Rises and Death in the Afternoon.

Ernest Hemingway's 'Hills Like White Elephants' tells the story of a traveling couple avoiding a very big conversation. While stopped at a railway junction in northeastern Spain, these two - known as the American and the girl - are the only people who directly speak except for 'the woman' who brings them drinks. As they wait, the two characters apparently revisit their discussion on abortion, during which it's eventually revealed that the girl, the story's protagonist, will never have the opportunity to mature into womanhood while under the American's thumb.

A Good Man is Hard to Find: Characters & Setting

A Rose for Emily by William Faulkner | Ending, Analysis & Explanation

The Story of an Hour by Kate Chopin |Summary & Analysis

Glaspell's A Jury of Her Peers: Summary & Analysis