Hinduism, like many other faith traditions, has denominations that diverge slightly from the main religion. Compare and contrast the four main denominations that Hindus belong to and learn about the gods associated with each. Updated: 01/19/2022
Create an account

When most people think of Hinduism, they think of the many gods and goddesses in the Hindu pantheon. While the Hindu pantheon is expansive, not all Hindus worship every deity. Starting around the fifth century CE, Hinduism became sectarian. Most practicing Hindus belong to a denomination or sect of Hinduism, which is a small sub-set of a larger tradition. The most famous of these sects, and those with the largest following, are Vaishnavism, Shaivism, Shaktism, and Smartism. The sects typically focus on bhakti, or devotion, to one deity. Let's look at each of these sects in turn. 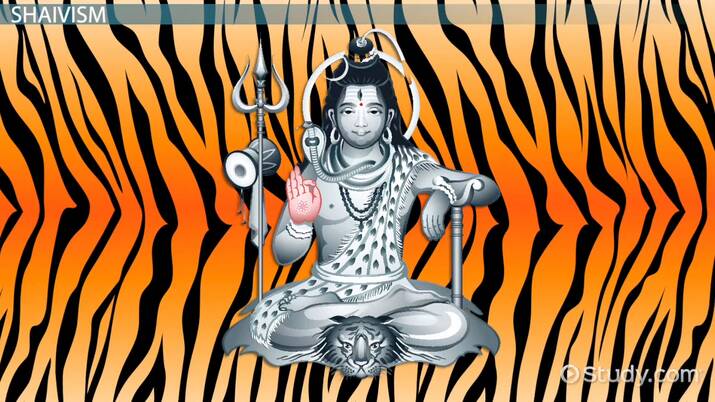 Coming up next: What are the Puranas? - Mahapuranas, Upapuranas, Sthala & Skanda

In Vaishnavism, Vaishnavas worship primarily the preserver god Vishnu and is by far the sect with the most followers worldwide. Vishnu manifested himself in many forms in the world, including as the ever-popular Krishna, a youthful, blue-skinned god associated with compassion. Vaishnavas typically worship his consort, Lakshmi, as well. The couple is often depicted sitting or lying on a giant thousand-headed serpent that's floating on the ocean of the universe.

Vaishnavas engage in bhakti to Vishnu not just because he is the preserver god. They also believe that Vishnu is the beginning and end of everything in the world. They even believe that Brahma, the Hindu creator god, was actually born from Vishnu's navel, coming out of a lotus flower, meaning that Vishnu created the creator.

Shaivism is the second-largest branch of Hinduism. This might seem strange since the followers, Shaivas, worship Shiva, the god of destruction. His title is not as simple as it seems, though. Shiva is not a malicious destroyer but a transformer. He acts as balance to the creation and preservation already part of the Hindu trimurti, or trinity, which consists of Brahma and Vishnu as well. Shaivas, however, believe that Shiva created everything.

Bhakti to Shiva often involves finding a midpoint between renunciation, separating oneself from the material world, and being part of the material world. This is often a result of meditation, and Shiva is often depicted meditating and with a tiger skin around his waist as well. One of the most important distinguishing factors is his third eye, which, unlike the other two, is looking inward at his mind, symbolic of the ''pure consciousness'' that Shiva represents with his focus on meditation. Despite the fact that he is typically associated with renunciation, he is sometimes worshiped alongside his consort, Parvati, and his son, the elephant-headed god, Ganesha.

While the major Hindu sects focus on bhakti to gods in the trimurti, Shaktism focuses on worship of the ''Great Goddess'' and her many forms. She is typically called ''Devi,'' though ''Shakti'' is another common name and what gives the sect its name. Adherents to this tradition hold the Devi Mahatmyh, or ''Greatness of Devi,'' text sacred. Shaktas believe the Great Goddess was created to kill a buffalo-headed demon who was terrorizing the universe, but could not be killed by a man, so a woman was created, showing that femininity was not equivalent with weakness.

Devi manifests herself over and over again eternally so that she can protect the world, like a mother protects a child. While she is powerful alone, she is sometimes depicted alongside Shiva, as Parvati, his consort, is a manifestation of Devi. In fact, Shiva is sometimes said to be lifeless without Devi. ''Shiva'' becomes ''shava,'' or a corpse, which is often depicted in artwork of Shiva and Devi as she stands on his limp body.

Smartism focuses on scholarly study of these Smriti texts. The name comes from Smriti, which is the body of texts about the history of the tradition that are composed by humans. The word literally means ''remembered'' in contrast to the ''heard'' texts of the Shruti, which were divinely written. The Smriti includes the popular Mahabharata text that tells Krishna's story. This is a different type of Hindu sect and is composed of only the upper-classes of the Hindu caste system. These include the Vaishya (merchants), Kshatriya (rulers), and Brahmans (priests).

Smartas, adherents of this tradition, worship five deities in pancayatana puja, or ''five shrines worship.'' These five are Vishnu, Shiva, Shakti, Ganesha, and Surya. Surya is the sun god and the father of Manu, who is considered the first human. While Smartas worship all these deities, they sometimes worship one more than the others, which is typically Shiva, perhaps for his focus on meditation.

Most Hindus worldwide belong to a particular sect, which usually focuses on bhakti, or devotion, to one deity. Vaishnavism is the largest sect in the world, and its adherents worship Vishnu the preserver, whether in his original form or as the youthful Krishna, and often worship his consort Lakshmi as well. Vaishnavas believe Vishnu is the original creator, even creating the creator god Brahma. Shaivism focuses on worship of the destroyer and transformer god Shiva, one of the three gods of the trimurti, which is often found meditating and depicted with a third eye. He is sometimes worshiped alongside his consort, Parvati, and his son Ganesha.

Shaktism is a sect that encourages bhakti to Devi, or the Great Goddess. Devi, also called Shakti, is depicted standing on Shiva's body frequently and is a powerful feminine figure. Smartism, rather than focusing on a particular god, is made up of upper-class Hindus who study the Smriti, or ''remembered,'' texts. They worship five major deities, including Surya, the sun god.

What are the Puranas? - Mahapuranas, Upapuranas, Sthala & Skanda

The Origins of Hinduism: the Indus River Valley & the Harappa Culture

What is Pantheism? | Pantheistic Religions & Beliefs

Hinduism's Holy Books: the Vedas | What are the Vedas?

Dharma Definition & Examples | What Is Dharma in Hinduism?