This lesson will explore the rituals and ceremonies of Hinduism. It will explain the concept of puja, while also highlighting upanayana, antyeshti, Holi, Diwali, and cow veneration.
Create an account

Today we're going to highlight some of the most important rituals, ceremonies and festivals of Hinduism. Since there are so many of these, we're going to try and highlight the main ones. However, even when limiting our scope to just the major ones, the lesson will still be rather heavy on Eastern terms. In order to combat this, we'll try and link these unfamiliar terms to our Western paradigm. 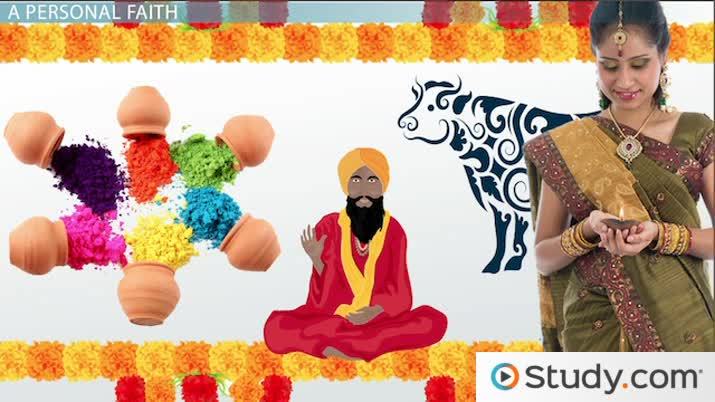 Coming up next: Mohandas Gandhi and the British Invasion

This Hindu act of worship is termed puja. In their worship, Hindus can personally choose which god they would like to worship and what they would like this worship to look like. In other words, puja is usually very, very personal.

Some choose to sing, some choose to sacrifice. Often times, personal puja will consist of a repetitious word or sound that aids in the concentration of worship. This word or sound, known as a mantra, is also a very personal part of Hindu puja, with the most sacred mantra actually being the word Om.

Although much of the Hindu puja is very personal, Hindus also have celebrations and things that bring them together in worship. For instance, most Hindus will hold to the concept of cow veneration. Although very alien to those of us from the West, Hindus believe cows represent divinity and, therefore, are to be protected and honored. Most scholars link this veneration to the large part cows played in the pastoral economy of ancient India. Although we in the West don't hold to this veneration, I'm guessing all of us have still heard someone exclaim, 'Holy Cow!'

Along with the general belief in cow veneration, Hindus also have many religious celebrations. The most popular of these is Holi, or The Festival of Colors, highlighting the god Vishnu. Celebrated to mark the passage of winter, Holi welcomes spring and is full of vivid colors. The best parts of this celebration are giant paint fights accompanied with water balloons, water guns, music and singing! Although it's a rather Western way to do it, I like to remember Holi as their main Holiday!

With Holi, the Hindu culture also celebrates Diwali. As a Festival of Lights, Diwali honors the Hindu god of prosperity and actually marks the beginning of the Hindu fiscal year. Since it deals with prosperity and wealth, I like to remember Diwali as a celebration of the Dollar. Again, very, very Western, but a great way to keep them straight!

Along with their festive celebrations, Hindus also hold very sacred ceremonies. One of the most important of these is the upanayana, or the Thread Ceremony. This ceremony, held to symbolize the transition from childhood into spiritual awareness, usually takes place in a boy's life during his pre-teen years. I like to think of it as the upanayana celebrating that a boy is growing up! During this revered event, the boy is given a sacred thread to be worn over his left shoulder. Symbolizing new birth, this sacred ceremony is reserved for only the upper castes of Hindu society.

While upanayana celebrates the idea of a young boy coming into spiritual awareness, antyeshti signifies the end of the Hindu physical life. Although Hinduism holds to reincarnation and not the Western idea of death, it helps me to remember this one by linking the 'A' in 'antyeshti' to the 'A' in 'afterlife', since in very simplistic and Western terms, it's a Hindu funeral.

As a very important part of Hindu worship, the antyeshti takes place to symbolize the passage from one life to the next. For this reason, most Hindus are cremated in order to free their souls for this passage. Without cremation, many Hindus believe a soul may linger aimlessly for days or even months.

Upon cremation, the ashes are spread over a river. The Ganges River, considered Hinduism's most sacred river, is a very popular place to scatter the ashes.

Like most faiths, Hinduism is full of rituals, ceremonies and celebrations. However, as a very personal faith, most of their puja, or acts or worship, are done on a personal level. An example of this is the use of a personal mantra, a repetitious word or sound that aids in the concentration of worship.

In addition to this personal worship, the Hindu faith consists of ceremonies. There is the upanayana, or the Thread Ceremony, which symbolizes the transition from childhood into a spiritual awareness. There is also the antyeshti, which we referred to as a Hindu funeral. Adding festivity to their worship, Hinduism also has Holi, the Festival of Colors, and Diwali, the Festival of Lights.

Completing this lesson should prepare you to:

Hinduism: The Four Stages of Life

History & Synopsis of the Four Gospels | What are the Gospels in the Bible?

Rituals & Rites of Passage in Society

Hindu Deities | Who Are the Main Hindu Gods?

Why is the Ganges River Important?

What Is Dharma in Hinduism? - Definition & Overview