With the rise of the Macedonian Empire, the Hellenistic Period took over Ancient Greek art. Discover the rebels who broke the rules during this exciting art movement, and explore the details of Hellenistic art. Updated: 11/05/2021
Create an account

Everybody loves a rebel. Bonnie and Clyde. Butch Cassidy and the Sundance Kid. James Dean. We love rebels. But rebels come in all shapes and sizes, breaking different sets of rules or expectations. In the Hellenistic Period, the last period of Ancient Greece that lasted from 323 BC to 31 BC, artists picked up the rebel cause and began creating new masterpieces that both built on, and challenged, centuries of Greek artistic traditions. 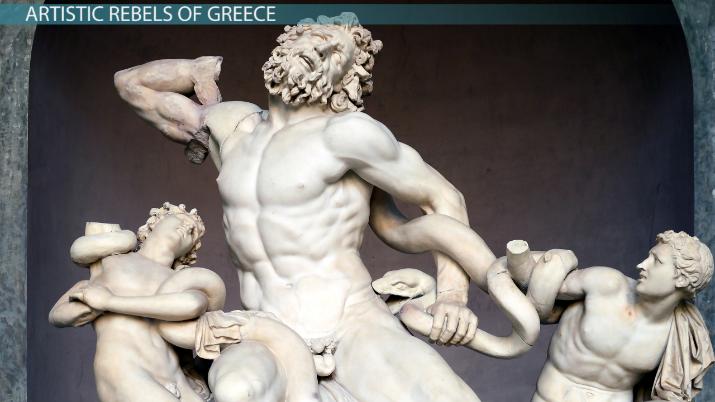 Try it now
Back
Coming up next: The Lost-Wax Casting Technique in Antiquity

The Hellenistic Period was a point when Greek cultural influence reached its absolute highest in the Mediterranean region. This was largely due to the rise of the Macedonian Empire, when the city of Macedon rose to power and conquered the Persian Empire. The most famous of the Macedonian kings was Alexander the Great, who pushed the boundaries of the empire into central Asia. By bringing these territories under Greek control, Alexander began the process of introducing Greek culture across the world, a process known as Hellenization.

Amongst the most important areas that fell under Greek influence was Egypt, still a major intellectual and economic center. The Egyptian town Alexandria, founded by Alexander, became one of the most important cultural centers of the Western world and a leading force in spreading Greek culture across the Mediterranean. The death of Alexander in 323 BC is officially considered the start of the Hellenistic Period, as the empire was divided amongst Alexander's generals who introduced a lasting Greek culture to their territories.

The Hellenistic Greeks were the first to look back on the era before the Macedonian Empire, the Classical Era, as a golden age in their history and they did their best to preserve the Greek masterpieces of theater, literature, philosophy, and math. The famed Library of Alexandria was part of this effort.

However, Hellenistic Greeks also developed their own intellectual culture. In philosophy, this period saw the development of Stoicism, which argued that moral and intellectual perfection prevented destructive emotions. In math, Euclid set the standards for modern geometry, writing textbooks that students would use well into the 20th century.

This period ended with the incorporation of Egypt into the Roman sphere of control, following the Battle of Actium in 31 BC and the deaths of Mark Antony and Cleopatra. This moment marked the official end of Greek cultural dominance, leading to the rise of Roman cultural and military expansion across the Western world.

Now, back to those rebels we were talking about. Artists in the Hellenistic period were involved in the preservation of Classical Greece, but also came to challenge those traditions in many ways. Architecturally, the division of the Macedonian Empire under several Greek generals resulted in the rise of tremendously powerful kings who had massive temples, palaces, and cities constructed that blended Greek and local styles. Whereas Classical temples were based on ideal, geometric ratios, Hellenistic temples embraced novel appearances. The Temple of Appollo in Didyma, Turkey, has a disproportionately small inner temple, extra rows of columns, and oh yeah, no roof! This would have been unacceptable in the Classical Era, but the rebels of the Hellenistic Period made many adjustments like this in their architecture.

In terms of sculpture, Hellenistic artists developed some truly outstanding styles. Building upon Classical traditions, sculptors created narrative scenes in reliefs on temples, but they achieved a new dimension of relief that was so refined, the figures seem almost entirely disconnected from the background. Reliefs and statues both reached amazing levels of sophistication, but challenged Classical traditions in terms of subjects.

Hellenistic artists depicted new themes in new ways. Look at this piece of a Gallic chieftain:

The Galatian tribes of Turkey were defeated by the Greek ruler Attalus, but this is not a scene of heroic victory. In this, the Gallic chieftain very heroically chooses suicide over surrender, after already having killed his wife to prevent her from being sold into slavery. The Greek victors are not depicted. Not only is the heroically vanquished enemy the subject, but check out how it's set up. To understand the full piece, the viewer must walk all the way around it. From one side, the slain wife is visible, but not the face of the chieftain. From the other, the face is visible but the suicide is hidden.

Hellenistic artist depicted new subjects, from old women to defeated boxers, which challenged Classical Era ideals of perfection. They also developed a new, sensual style of portraying goddesses, as in the famous Venus de Milo, who were treated with overtly sexual tones. In terms of Ancient Greece, challenging the conventions of sculpture was a major act of rebelliousness that signified the transition from the Greek to the Roman world.

The Hellenistic Era was a period of Ancient Greece characterized by the expansion of Greek culture across the Mediterranean and the challenging of Classical Era artistic traditions. This era began with the death of Alexander the Great in 323 BC and ended with the Battle of Actium in 31 BC and the rise of Rome as the cultural and political center of the Western world.

During the Hellenistic period, Greek intellectuals looked back on the Classical Era as a golden age, working to preserve the works of that time. They also developed new philosophies and theories, mostly from the Hellenistic cultural center of Alexandria in Egypt.

Architecture of the Hellenistic Period saw a rejection of ideal, mathematical ratios of Classical temples, and mixed local and Greek elements together across the Western world. In sculpture, Hellenistic artists developed highly sophisticated styles and used them to depict new subjects in new ways. The defeated, the old, and the sensual replaced former statues of heroes and victors. These may have seemed radical, but hey, everyone loves a rebel.

Greek Culture, Beliefs & Influence | What is the Culture of Greece?