Funk music is a unique genre that held an important place in popular culture during the 20th century. In this lesson, we'll explore the history of funk and see how it came to be so funky. Updated: 03/09/2021
Create an account

In the immortal words of George Clinton and the band Parliament, ''We need the funk. Gotta have that funk.'' Oh yeah, it's time to get funky.

Funk music is a popular genre of the 1970s and 1980s technically defined by a combination of African-American soul music and a strong syncopated beat. But the definition offered by musical legend Prince hits closer to home: ''If you can describe it, it ain't funky''. Funk is defined less by a strict set of stylistic rules and more by an attitude, with of course a beat that encourages dancing. But if you want to really understand it, you need to know its history. Gotta have that funk.

Funk music is not an isolated genre but one that comes from a rich musical lineage. In the late 19th century, African-American musicians began gaining national attention for some very unique sounds that blended African rhythmic traditions with American gospel. By the early 20th century, this general sound was being called jazz music, although it lacked a standard definition. Jazz was about improvisation, freedom of expression, lively tempos, and innovative rhythms.

The freedom of jazz, and its growing popularity, brought wider attention to African-American musical styles and encouraged these musicians to continue experimenting. Many different forms of jazz music emerged, but most were heavily identified with young, black, urban culture. These traits defined the attitude of jazz, as well as its role in the new dancing and entertainment cultures of the Roaring Twenties.

The Rise of Soul

From jazz, other sounds emerged as well, also closely associated with young, black urbanites. In the 1960s, the dominant new sound was a mixture of blues and gospel music with a wider appeal and again, a notable rhythm. This genre was called soul. While Harlem was the focal point of jazz, Detroit became the epicenter of that ''Motown Sound.'' Motown musicians like the Temptations, Marvin Gaye, and even Stevie Wonder embraced a different style and sound than jazz, but the genres were connected in many ways, and both connected to African American urban identity in a still-segregated United States. 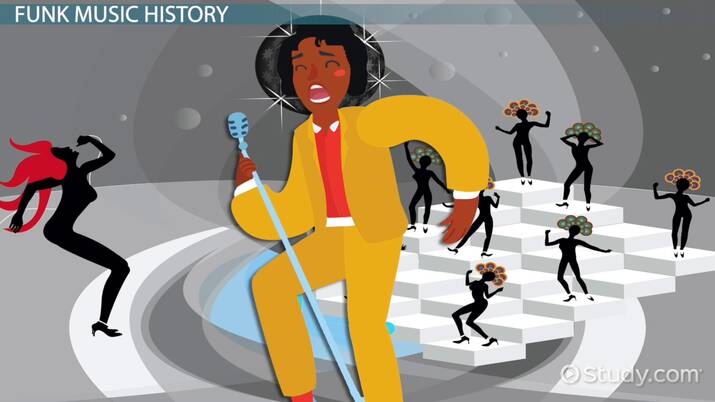 Of the 1960s soul artists, one stood out for an especially distinct sound. James Brown had a strong voice but also focused his music much more heavily on a bold, syncopated rhythm. While rhythm had long been a staple of African-American genres, Brown's use was different. It was sharp, disproportionately heavily, and accentuated by the lyrics and Brown's performance style. This rhythm, which demanded being danced to, along with Brown's unapologetic attitude and racial pride, would go on to be cornerstones of funk music.

This sound was carried on by George Clinton. Clinton originally led a doo-wop/soul band called the Parliaments, but in the late 1960s and early 1970s would go on to found two of the formative funk bands: Funkadelic and Parliament. These bands embraced a strong rhythmic attitude like James Brown, but carried it even further with a stronger groove, or a sense of rhythmic pulse that had been a part of African-American musical traditions since the first days of jazz. Clinton's music combined elements of rock and roll, jazz, blues, soul, and gospel into what would become the definitive sound of funk.

As had happened with jazz, a new style was emerging amongst urban African-American musicians. However, just as before, the new sound was not really considered to be a definitive part of American culture until accepted by white America. That came largely thanks to the band Sly and the Family Stone. Not only was this band racially integrated but they streamlined the funky sound to give it a wider appeal. They also established one of the definitive traits of later funk music by handing the grooved rhythm over to bass guitarist Larry Graham. The heavy use of the bass guitar over other rhythmic and melodic elements gave funk music a distinctive sound.

Throughout the 1970s and 1980s, funk music grew into a more popular genre carried by musicians ranging from Zapp to Prince. Like jazz and its other predecessors, it was never meant to be defined by rigid rules of style, but we can identify some common elements.

We've already talked about the strong syncopated rhythm and the heavy groove, but funk was just as defined by its attitude. Funk music was socially conscious music, dealing with issues of racial identity, political dissatisfaction, and urban life. It encouraged urban styles of dance, which itself encouraged young African Americans to embrace their social visibility and presence. It was unapologetic and distinct, audibly standing out from other genres of the 1970s and 80s. It was funky.

All right, let's take a moment or two to review what we've learned. As we saw in this lesson, funk music is a popular genre of dance-based music relying on a heavy syncopated beat and grooved, pulsing rhythm, with groove being simply a sense of rhythmic pulse that had been a part of African-American musical traditions since the first days of jazz. It's a product of African American urban culture, and as such, traces its roots back to the attitudes and styles of jazz, gospel, blues, and soul. Soul music of the 1960s, which was a mixture of blues and gospel music with a wider appeal and again, a notable rhythm, most directly led to the development of funk, with musicians like James Brown relying on heavier rhythms and strong social messages.

Funk itself can largely be attributed to George Clinton, who standardized the sound with his bands Funkadelic and Parliament. Funk gained a wider audience largely thanks to Sly and the Family Stone and established a strong presence in American culture. It was characterized by its beat and its attitude more than anything else. Yet, it defied a simple definition, describable through only word: funky.

What is Funk Music? - Definition & Characteristics

History of the Punk Rock Subculture