Gambling is a major pastime in the United States, and it's not without its own history. In this lesson, we'll explore the history of gambling and see how it has impacted America throughout the years.
Create an account

'I'm calling your bluff.' 'I'm all in.' 'I've got an ace up my sleeve.' What do all of these common American parlances have in common? They're all based in gambling lingo. Games of chance and luck, upon which money is staked, have been both a popular form of recreation and a major topic of debate in the United States. To fully understand this, we need to ante up and take a look at the history of American gambling. 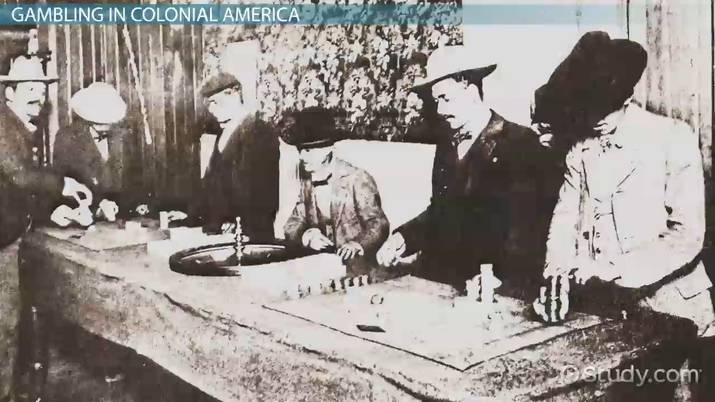 Games of chance have been a part of European cultures for as long as we can tell. So, when Europeans arrived in North America, these traditions were not only maintained, but also encouraged as a way to transfer a bit of home into a new environment. In the French port of Louisiana, for example, high-end gambling houses were built that closely mimicked those of Paris.

In the English colonies, gambling was a popular form of recreation focused mainly around games of cards or dice. You may have heard of the 1756 Stamp Act, in which the English placed a tax on paper documents. One reason that the colonists protested this so fiercely was because it taxed playing cards.

American colonists also embraced the European concept of a lottery, and this is the first time the colonial governments really became involved in gambling. When America entered the French and Indian War in 1754, lotteries helped generate revenue for the war.

After America gained its independence, gambling remained a popular pastime but also changed with the times. From the early 1800s through the 1840s, America began to expand west, went through its first Industrial Revolution, and developed a free market economy. Gambling became a part of this economy on a wider scale, focused more on the promise of substantial gains but also featuring substantial risks.

While Washington D.C. was amongst the largest gambling centers of the era, it was not alone. The other major hotbed of gambling was the Mississippi River. Steamboats, an American invention of the early 19th century, cruised along the river as mobile gambling houses filled with food, music, and other luxuries.

Gambling After the Civil War

The Civil War turned the Mississippi River into a battle zone and disrupted the economic success of gambling houses in the South. Reform movements that originated in the rebuilding of the post-slavery South also grew, and moral questions about gambling began to appear.

At the same time, gambling moved into the American West with the boom of post-war settlers. Contrary to popular belief, however, not all Western towns supported gambling. Many of these towns were founded on temperance-based Protestant ideals and outlawed gambling outright. By the 1890s, moral-based reform movements had grown in size and scale to the point that gambling was essentially banned across the entire United States.

Gambling in the Early 20th Century

That brings us to the 20th century, which began as an era obsessed with moral reform. Along with gambling, progressive reformers sought to abolish other social evils like alcohol, an agenda they achieved with the passing of the 18th amendment, which instituted the national ban on alcohol known as Prohibition in 1920.

Prohibition ended up being the saving grace of American gambling. After the First World War ended in 1918, many Americans began to lose their zeal for reform and instead tried to focus on enjoying their lives. As a result, Prohibition was a dismal failure, with Americans flocking to underground bars called speakeasies. For the organized crime syndicates that trafficked illegal alcohol, the concept of people gathering to participate in illegal vices presented an opportunity. Gambling returned in a big way, sponsored by organized crime and closely associated with black market alcohol consumption.

Then, in 1929, the stock market crashed, and the national economy went with it. Unemployment skyrocketed in some areas, and the government struggled to find new sources of revenue. One state, Nevada, had a unique solution: legalize gambling. In 1931, Nevada made gambling legal once again and used the taxes from gambling houses to pay for welfare programs of the Great Depression. These gambling houses grew in size, becoming the first modern casinos. Other states followed suit and casinos began to emerge across the country.

Just as America was beginning to recover from the Great Depression, it was drawn into World War II. By the war's end in 1945, the United States was left with a booming economy, a population with extra cash to spend, and a number of established casinos. Gambling increased in the 1950s and '60s across the nation, with the first official casino company appearing in the New York Stock Exchange in 1973.

The growth of American gaming led the government to start passing laws aimed at regulating and enforcing the industry. However, in the 1980s, a unique question arose: was gambling legal on Native American reservations? In the 1987 case of California v. Cabazon Band of Mission Indians, the U.S. Supreme Court decided that any state that allowed gambling must extend that right to reservations in that state. This was upheld in the 1988 Indian Gaming Regulatory Act, which established the legal frameworks for monitoring gambling on the reservations, and the use of gaming to generate revenue for reservation-based Amerindian nations skyrocketed.

By the advent of the 21st century, every state except Hawaii and Utah had legalized gambling. Louisiana and Nevada supported statewide casino industries. Casinos generated more revenue than state lotteries by 1993 and only continued to grow with the rise of Internet gaming. So, gaming seems to be here to stay. It's an American success story about an industry that was always a bit of a gamble.

Gambling has deep roots in American history. From colonial pastimes and early lotteries, through the rise of large-scale gambling houses in the early 19th century, it was an important part of American life. Gambling wasn't seriously challenged until moral reform movements appeared after the Civil War, leading to legal bans on gambling in most states. Gambling returned, however, during Prohibition as part of illegal recreations supported by alcohol-trafficking crime organizations. It was made legal again by the state of Nevada during the Great Depression to generate revenue, leading to the first modern casinos. Gambling exploded after WWII, and became sources of revenue for many Amerindian nations with the case of California v. Cabazon Band of Mission Indians and the Indian Gaming Regulatory Act of the 1980s. Today, gambling is legal across most of the country and only continues to grow. Will it be around for much longer? It's a safe bet.

History of Gambling & Casinos in the U.S.
Related Study Materials