Mike is a veteran of the New Hampshire public school system and has worked in grades 1-12. He has a Master's of Education specializing in Social Studies.

View bio
Discover the history of Nigeria, a country in West Africa. Follow the region's many changes from its earliest settlement by the Nok in 800 BCE, through the challenges of colonialism and slavery, how Nigeria gained independence, and Nigeria today. Updated: 12/21/2021
Create an account

Have you ever had to choose between two options you did not like? Sometimes there's no good choice. After being controlled by England for hundreds of years, the people of Nigeria established an independent government that soon became corrupt. Most Nigerians, though, choose to support the corrupt government over the terrorist group kidnapping their children.

On the land now known as Nigeria, the earliest settlement was formed in roughly 800 BCE at the Jos plateau by the Nok people. Their civilization and culture continued to expand until the 1400s, when Portuguese explorers reached the western coast of Africa. This contact led to the Atlantic slave trade and sent millions of Africans to the Americas for the next 200 years. The Atlantic slave trade involved Europeans taking slaves from Africa and traveling to the Americas to sell them. They would return to Europe with the money before leaving for Africa again to get more slaves. 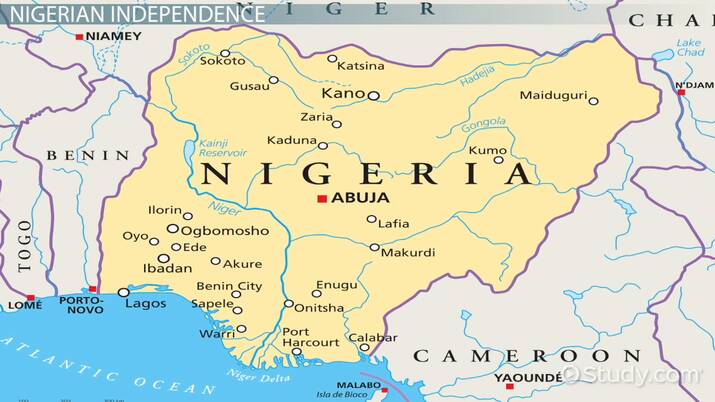 Coming up next: North Korea Facts: Lesson for Kids

In the early 1800s, the tribes within Nigeria began a series of civil wars based mainly upon tribal identity and the ability to control areas of land. In this climate, the British arrived. Through sheer military force, England took control of the land. Once English dominance was established, the land became known as the Colony and Protectorate of Nigeria. This was the first time the land was known as Nigeria in any form.

The British banned slavery and established indirect rule, meaning England chose people and groups to control areas in Nigeria. These groups were allowed to stay in power as long as they raised enough money and resources for England. These chosen groups were often accused of exploiting the people of Nigeria in order to continue paying England for the authority to rule.

Nigeria gained its independence in 1960 and then separated into three distinct regions, with Prime Minister Abubakar Tafawa Balewa overseeing them. The regions were divided for both geographical reasons and ethnic identity. However, separating along ethnic lines led to distrust. The death of Balewa in 1966 caused war to break out in Nigeria, which continued until 1975, when Murtala Ramat Mohammed took control of Nigeria.

One year after taking power, Murtala Ramat Mohammed was killed in a failed attempt to overthrow his established government. General Olusegun Obasanjo took control of Nigeria and attempted to create a more direct democratic process in Nigeria. This democratic government lasted until 1983, when the military took over the Nigerian government.

Nigeria has been ruled by a series of military dictator generals since the fall of its democratic government in 1983. Generals who took control of Nigeria have typically done so by controlling Nigeria's vast oil fields. Control of these fields allowed them to pay the Nigerian army to do their bidding.

The area known as Nigeria was originally settled by the Nok people around 800 BCE. The arrival of the first Europeans from Portugal in the 1400s subjected people who lived in the area to an unwilling role in the Atlantic slave trade, where people were enslaved, taken to the Americas, and sold. In the early 19th century, the British arrived and formalized the Colony and Protectorate of Nigeria under indirect rule, meaning England chose people and groups to control areas in Nigeria. Independence from Britain in 1960 led to civil war, a brief democracy, and then a series of military dictatorships, under threat today by the terrorist group Boko Haram.

Prompts About the History of Nigeria:

Provide the definitions of the terms that are in bold from the lesson (Atlantic slave trade, indirect rule, Boko Haram). Each definition should be one to two sentences in length.

Tip: It may be helpful to draw a map to illustrate the definition of the Atlantic slave trade.

Write an essay of one paragraph that explains the European (especially British) influence on Nigeria.

Example: When the British took over Nigeria in the 1800s, they banned slavery.

In one paragraph, write an essay that answers the following questions: What happened when Nigeria gained independence? Why has democracy struggled to flourish in Nigeria?

Example: Democracy has had a hard time taking hold in Nigeria because it is a nation with many ethnic and geographical divides.

Make an informational poster about current conditions in Nigeria today. Make sure that your poster mentions the influence of Boko Haram.

What Is History? - Lesson for Kids

Properties of Soil: Lesson for Kids

Types of Soil: Lesson for Kids

History of Computers Lesson for Kids