Pan-Americanism was a movement started in the early 19th century that encouraged unity among the Americas. Learn about the failure of early attempts and the importance of trade to the success of later attempts. Updated: 11/04/2021
Create an account

Put yourself in the shoes of the first leaders of American republics. No, I'm not just talking about the United States but also all those countries in Latin America that had gained their independence in the 1820s and 1830s. Freshly independent, determined in most cases to become republics and woefully distrustful of anything originating in Europe, these early states soon found themselves looking at each other. The liberator of Northern South America, Simon Bolivar, openly admired the American Revolution, going as far as to send family members to study in the new country.

Given the fact that so many newly independent countries were being established and the open disdain for Europe, there was a line of thinking that suggested that the Americas could do better than the Europeans. After all, the elites in these countries had been motivated in no small part by economic concerns to revolt in the first place, and places like Rio de Janeiro or New York City offered markets that compared to any in Europe. This idea that the countries of the Americas should have some form of unity is Pan-Americanism. 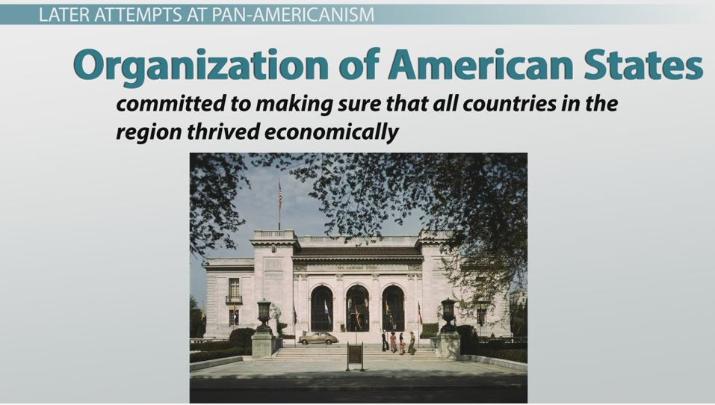 Coming up next: Building the New Navy

This idea that the Americas should be for citizens of American countries was widely embraced. Most famously, the United States was eager to prove itself on the world stage and, in doing so, gain influence over other American nations. This was accomplished through the Monroe Doctrine, which promised that the U.S. would stay out of European colonial affairs in the New World but only if the Old World stayed out of the affairs of the Americas. Since the United States had no real way of enforcing this, it was only possible due to the fact that Britain, secure in her colonial possessions in Canada and the Caribbean, could point to it in order to justify the Spanish and Portuguese loss of their extensive colonies in South America.

In fact, it was the British who would be the real winners of early Pan-Americanism. Bolivar, the liberator of much of Latin America, wanted to have a meeting of all the newly independent states of the Americas in Panama in 1826, with the goal of uniting many of the states into a giant alliance. This meeting is known as the Congress of Panama. Needless to say, the United States was very eager to know what was going on at this meeting. However, a lack of willingness from Southern states to authorize any further recognition of Latin American countries that had forbidden slavery meant that by the time the sole representative from the United States arrived, all the important business of the conference was complete. Instead it was the British, who literally just showed up out of curiosity, who were able to make meaningful agreements with most of the countries present. Meanwhile, unfortunately for Bolivar's vision of a United States of South America, too much infighting and regional rivalry meant that none of that was possible.

The Congress of Panama was by no means the last attempt at Pan-American thought. While numerous wars waged between the countries of Latin America largely put an end to any attempts to combine the region under one military, there was still plenty in the way of economic opportunity. As a result, many of these meetings were focused on gaining as much in the way of trade agreements as possible. From these earlier congresses grew the Organization of American States, headquartered in Washington, DC and committed to making sure that all countries in the region thrived economically. The fact that the OAS was centered in Washington tells you all you need to know about the United States' commitment to the organization - far from showing up late, the U.S. now wanted to be in the middle of the proceedings!

Ironically, the OAS itself, mainly occupied with politics, was founded to protect economic interests. In no small part due to the economic makeup of much of Latin America, especially those countries that were export economies heavily dependent on the United States, there was a relatively small number of wealthy people who held disproportionate political power. These people were frightened by the rise of communism and began to work to ensure the capitalist nature of the region. In doing so, especially during the Cold War, they made sure that the United States had considerable political influence.

Pan-Americanism was heavily discussed at the beginning of the 19th Century, but little came from early actions like the Monroe Doctrine or the Congress of Panama that benefited anyone except the British. Instead, wars tore much of Latin America apart, despite the fact that Simon Bolivar and other liberators had largely established the new countries of the region as large confederacies. However, as trade grew more important, the states of the Americas found common ground, ultimately enshrining a level of political agreement with negotiations through the Organization of American States.

After the video, you should aim to:

What is Capitalism? - Definition & Examples

Meiji Restoration Effects & Causes | What was the Main Goal of Japanese Modernization?