Joanna has taught high school social studies both online and in a traditional classroom since 2009, and has a doctorate in Educational Leadership

The great and notorious state of New York has a rich and full history of migration that makes up a lot of its cultural layout. Learn more about the role of history and immigration in New York, the different ethnic groups, and their cultural impacts. Updated: 02/22/2022
Create an account

Did you know that 40 percent of today's American population had an ancestor walk through the immigration office at Ellis Island in New York City? Why such a high number? Well, let's take a look at the history of immigration in New York.

If you take a stroll down Beaver and Broad Streets in modern day New York City, you would be walking along what was once New Amsterdam. Unlike the other original 13 colonies (mainly British), New York was settled by the Dutch of the Netherlands.

In 1625, the Dutch West India Company established the settlement of New Amsterdam, and the first fort they built, called Fort Orange, was established a year later. The Indian Wars didn't curb the increasing Dutch immigration, and by 1645, peace had been made with Native American groups that once populated the area. The Algonquin Indians sold the island of Manhattan to the Dutch for the modern day equivalent of $24.

By 1656 a census showed that there were 1,000 people in New Amsterdam. Trade disputes between the Dutch and Great Britain in the late 1600s would see the area transferred to the control of the British in 1674, when the name was changed to New York. 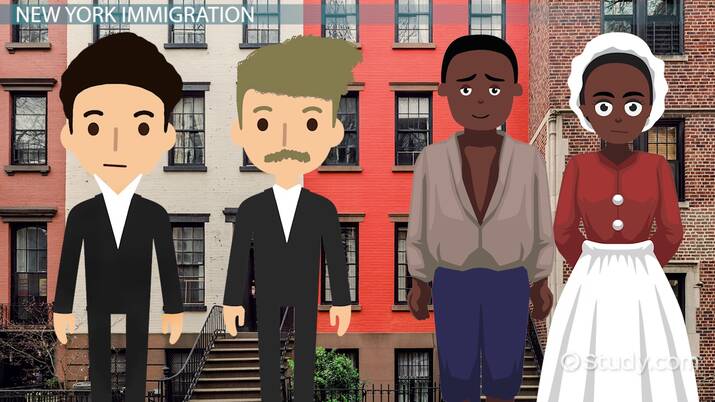 Many different European groups began to immigrate to New York in the 1700s with the largest group being Germans. While not immigrants, a great number of Africans also came to New York as part of the Dutch East India Company slave trade.

In 1626 the first Africans arrived, brought by the Dutch East India Company. The Dutch East India Company was the biggest importer of slaves through the 1600s, and mainly Africans from Angola were brought into New Amsterdam. There they were forced to build roads, clear the forests of Manhattan, and grow crops. By 1756 there were over 13,000 slaves in New York, ranking it as the largest slave-importing colony in the North.

The Germans began immigrating to New York in the 1700s. Most of them were from the Palatine area of Germany and were of the Protestant faith. After relocating to Holland and then England, they made the trek to New York. In 1710 alone a little over 2,000 Germans arrived in New York.

When the Revolutionary War ended in 1783, New York became a state. The Dutch, British, Germans, and newly freed Africans (freed between 1799 and 1817) began to welcome new groups of immigrants by the 1840s.

Because the Great Famine (aka potato famine) had decimated Ireland, by 1847 over 50,000 Irish converged on New York City. That year over 50,000 new Germans also moved into New York, causing widespread panic among the 300,000 New Yorkers already living there. These immigrants were forced into the worst jobs and worst homes the island had to offer.

Germans were met with hostility, but they had established community in New York and so fared better than the Irish. The Irish faced angry mobs and extreme hostility even into the Civil War years where they were drafted into the army at alarming rates.

The 1880s saw the beginning of new immigration, where droves of Europeans came to the U.S., arriving at Ellis Island in the New York Harbor. Their first sight was the newly built Statue of Liberty. This new wave of immigrants came to look for jobs or to escape religious persecution or war, among many other reasons. European Jews, Russians, Greeks, and Italians came into Ellis Island and settled in ethnic neighborhoods around New York City.

The new immigration lasted until about the 1920s when Congress put new rules in place to curb the influx. By that time more than 12 million European immigrants had come through Ellis Island, which closed as an immigration station in 1954.

Different circumstances also led to explosions of new groups of Americans who moved to the city looking for opportunity.

During the 1880s there were many issues plaguing American farmers. Overproduction and tariffs had led to the price of crops hitting record lows during the decade. Many farmers would lose their land and move to New York City at the same time as millions of immigrants. These farmers competed for the low-wage factory jobs and housing with the international immigrants, leading to strife between the two groups.

New forms of technology from the Industrial Revolution led to an influx of Americans who were educated and ready for upward mobility, particularly women. The typewriter (invented in 1868) created new secretary jobs for educated women, and the telephone (invented in 1876) created new operator jobs for women. Educated women migrated to New York City to enjoy higher wages and a newfound independence that would make 1920s New York an exciting place for this demographic.

All right, let's take a moment to review. Immigration and migration to New York has been a hope-filled dream for millions of people since the 1600s. The Dutch were the first immigrants to what was then New Amsterdam and made the first inroads to building Manhattan to what it is today. The Dutch brought slaves from Africa, and German immigration began heavily in the 1700s.

By the mid-1800s the Irish came to New York City to escape the Great Famine. The new immigration was a wave that occurred from the 1880s to 1920 and brought more Irish and Germans, as well as other European groups. These immigrants faced nativism, where older more established Americans (who were immigrants as well) disliked the new immigrants. This new wave of immigrants came to look for jobs or to escape religious persecution or war, among many other reasons.

Domestic migration would bring even more people to New York City. Farmers having lost their land, as well as women taking advantage of the invention of the telephone and typewriter, came looking for employment opportunities.

Food During the Great Depression Lesson for Kids

Kingdom of Judea History & Map | What is Judea?

What is a Quaker? | Who were the Quakers?

Using the Imperfect Subjunctive with the Conditional in Spanish