U.S. crime rates and trends are impacted by the country's social, political, and economic circumstances. Learn how crime is measured, explore historical crime waves of the 1920s and 1930s, see how it changed during the 1940s through the 1970s, assess homicide rates in the 1980s and 90s, then review crime in the 21st century. Updated: 04/24/2022
Create an account

What's the crime rate in your neighborhood? How do you know? You might go on what you've seen or heard, but experts use specific tools to measure crime. Societies have kept track of crime for many centuries. They keep track of crime in order to assess the effectiveness of the criminal justice system and test various criminal justice theories.

In the U.S., experts typically use one of three well-known criminal justice reporting systems to measure crime, assess crime rates, and make policy decisions about public safety. The first is the Uniform Crime Reports, or UCR, which is a city, county, state, and Federal law enforcement program that has been in operation since 1929. This report contains nationwide crime statistics compiled by the FBI from law enforcement agencies throughout the country. The UCR program is based on aggregate statistics, which represent total counts of crimes reported to the police, including arrests, but no details regarding individual incidents. Compliance with UCR is voluntary, meaning state and local law enforcement agencies choose whether or not to report their statistics. Around 95% of all law enforcement agencies participate.

By the early 1990s, law enforcement agencies began to expand the UCR system to gain more in depth information on crimes for targeted decision-making, training, and research. New guidelines for the UCR resulted in creation of the second reporting system called the National Incident Based Reporting System (NIBRS), an incident-based reporting system for crimes reported to the police. It is a part of the UCR Program and collects a variety of specific data for each crime incident coming to the attention of law enforcement, including the nature and types of specific offenses in the incident, characteristics of the victim(s) and offender(s), types and value of property stolen and recovered, and characteristics of persons arrested in connection with a crime.

The third reporting system is the National Crime Victimization Survey, or NCVS. This information is collected every six months by the U.S. Census Bureau and compiled into an annual report by the Bureau of Justice Statistics. The NCVS has been used since 1972. It collects information related to victimization, victims, type of crime, crime location, offenders and whether or not victims reported the crimes. Notice that the NCVS captures statistics the UCR does not, since the NCVS includes crimes that aren't reported to the police. 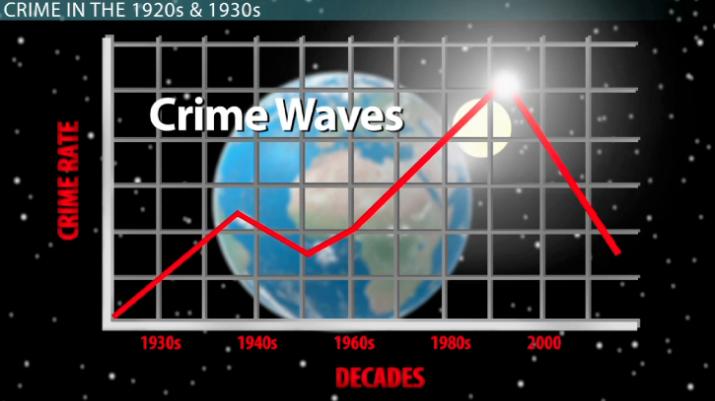 Throughout United States history, crime rates have experienced both highs and lows. Certain notable periods in history are associated with crime waves, or peaks in the crime rate. For instance, crime increased throughout the 1920s and early 1930s, during the Prohibition era. The UCR began collecting and reporting data toward the end of this era.

You might expect a higher crime rate due to violations of the alcohol ban. However, the number of serious, violent crimes also increased during Prohibition. This is the period during which organized crime first flourished. Organized crime refers to any group of two or more people working together in an illegal activity. These types of organizations were around before Prohibition, running illegal prostitution and gambling rings. During Prohibition, criminals organized in order to bootleg liquor. The organizations illegally manufactured, stored, transported and sold alcohol.

On the tail end of Prohibition came the Great Depression. This severe economic downturn started during the Prohibition era and lasted throughout the 1930s. The Depression brought another rapid rise in crime, though not violent crime. Instead, theft and prostitution rates rose as desperate, unemployed workers sought ways to pay for food and shelter.

Crime rates rose again after World War II, slowly increasing during the civil rights era and Vietnam War. This time period saw many instances of civil disobedience, including rioting and protests. Additionally, there was a post-war population boom resulting in more American teenagers and young adults in the 1960s and 1970s than ever before. Both violent and property crime rates rose between 1960 and 1970. The UCR measured a 176% increase.

Around this time, crime became a national hot topic. By 1965, a poll showed that Americans viewed crime as the most serious issue in the country. This led President Lyndon B. Johnson to declare a War on Crime. This 1965 initiative authorized several studies on crime in order to develop reforms and boost public confidence. This was a significant step in the federal government's role regarding crime, because the crime rate was mostly related to state and local crimes. Those crimes were considered to be beyond the jurisdiction of the federal government, so the federal government's previous involvement had been limited.

In 1970, President Richard Nixon also declared, or re-declared, a War on Crime in his State of the Union address. Nixon asked for and received federal financial aid for state and local law enforcement efforts. This was another significant step. Nixon followed up by declaring a War on Drugs in 1971. Though by the end of 1972, 42% of Americans reported that they were afraid to walk in their own neighborhoods at night.

The actual crime statistics didn't necessarily support this fear. The UCR showed a continual increase in the crime rate between 1970 and 1990. However, the NCVS largely showed a steady amount of crime reported by victims during that same time. Some experts believe that this means the crime rates largely remained the same, while the number of offenses entering the criminal justice system increased due to public awareness and political efforts.

The UCR continued to show a rise in crime throughout the 1980s, peaking in the early 1990s. Violent crimes almost quadrupled, and property crimes more than doubled, between 1960 and 1992. But that was the top. The UCR and NCVS statistics agree that we've been on a downward slide since 1992.

The decade before, however, is infamously known as the 1980s Crime Wave. But not all Americans felt the effects. Large, urban areas seemed to experience an increase in both property crimes and violent crimes through the early 1990s. In particular, homicide rates increased and gained widespread attention. Violent crime rates were higher among young males than ever before. Many experts pointed to the popularity of street gangs and a rising drug trade.

Again, the president responded. Bill Clinton signed the Violent Crime Control and Law Enforcement Act in 1994. This act is the largest and most extensive crime-related legislation in U.S. history. The act covered a number of areas, including:

Crime in the 21st Century

Today's crime rates are similar to those of the 1960s. For example, the UCR reports a 48% reduction in violent crimes between 1993 and 2012 and more than a 50% reduction in homicides during the same time period. The UCR's latest 2013 statistics continue to show a steady decline in crime across the board.

Criminal justice experts have posed some interesting possible reasons for the general reduction in crime, including:

Let's review. In the U.S., crime rates are measured in a few different ways. The Uniform Crime Reports, or UCR, is a report containing crime statistics compiled by the FBI. The UCR uses aggregate statistics, which represent total counts of crimes reported to the police, including arrests, but no details regarding individual incidents. This was amended with the addition of the National Incident Based Reporting System (NIBRS) which offers law enforcement agencies more comprehensive data about the crime incidents reported in the UCR. The National Crime Victimization Survey, or NCVS, contains information collected every six months by the U.S. Census Bureau and is compiled into an annual report by the Bureau of Justice Statistics.

Crime rates show the existence of crime waves at different points in history. For instance, organized crime refers to any group of two or more people working together in an illegal activity. This type of crime flourished during Prohibition and led to a rise in crime. The rates rose again in the 1960s, resulting in the War on Crime. This was a 1965 initiative that authorized several studies on crime in order to develop reforms and boost public confidence.

Crime rates peaked in the early 1990s. They've been on the decline since the enactment of the Violent Crime Control and Law Enforcement Act, which is the largest and most extensive crime-related legislation in U.S. history. However, experts do not agree on whether the act itself spurred the decline.

Now that you have finished reviewing this lesson, you should be able to:

How Demographics Contribute to Crime