In World War II, Hitler was motivated to achieve glory for Germany and to end what he considered inferior races. Learn about Hitler's military strategy, goals, motivations, and failures. Updated: 10/19/2021
Create an account

Most games require a strategy. Perhaps you're playing basketball, and you want your best shooter to get open as much as possible, or perhaps you're playing Monopoly, and you plan to buy up an entire corner of the board. No matter what you are doing, there is usually some forward thinking and planning required if you really want to win.

Far more grave than any playground or board game, war also requires well-thought-out, incisive strategy to both beat the enemy and preserve as many men as possible. Though it ultimately (and thankfully!) failed, Adolf Hitler's military strategy during WWII was initially devastatingly effective. In this lesson, we'll review the strategy and tactics employed by Adolf Hitler's Germany during WWII. 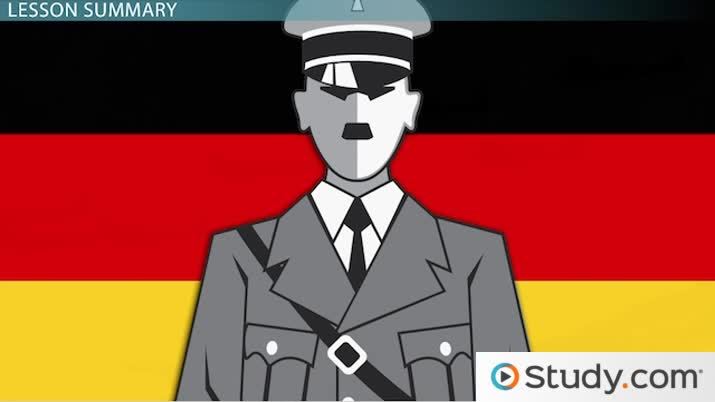 Coming up next: The Holocaust: Antisemitism and Genocide in Nazi Germany

By the end of the 1930s, Hitler had consolidated nearly all the power in the German government in himself. German policy was essentially his policy, and the dictator was keenly involved in all military decisions once the war got under way. Two policies justified German expansionism in Hitler's eyes. The first was Hitler's belief that all ethnically German and German-speaking people should belong to his self-styled German Third Reich. This was Hitler's justification for the annexation of Austria and later, the Sudetenland. Furthermore, its seemingly reasonable premise is what led countries like Great Britain and France - two countries who wanted to avoid another continental war at all costs - to acquiesce to the annexations.

Secondly, and far more privately, Hitler believed this new German Empire required lebensraum, or living space. According to this policy, Hitler felt it was his Germany's right to expand outside its normal borders into Europe and elsewhere, accumulating colonies like the Western European powers of previous centuries. These new land acquisitions would provide area for German colonists to expand and populate, while the conquered people would be swept aside, either subordinated to German power or worse - wiped out entirely.

In order to both begin accumulating this land and destroy the Western powers who would surely oppose German expansionism, Hitler believed he needed war. After failing to gain the acquiescence of Poland on its eastern border, Hitler resolved to eliminate any trouble Poland might present during his assault on Western Europe by invading Poland and entering into a non-aggression treaty with Joseph Stalin's Soviet Union. The two nations essentially split Poland between themselves, and Poland was wiped off the map in a matter of weeks. Hitler then turned his eyes west, annexing Norway in April 1940 and invading France in May. The British and French forces provided little resistance, and Hitler assumed total control of France by June of that year.

The invasion of both Poland and France were completed so quickly because of Hitler's innovative blitzkrieg attack, a German word that literally means 'lightning war.' The German blitzkrieg eschewed the infantry-heavy assaults that had caused WWI to become a bogged-down quagmire, in favor of speed and devastating power. The Germans used the tank, a relatively new technology, as the thrust of its attack rather than as supporting artillery. German tanks raced across the countryside, destroying key defensive installations and simply driving around heavily fortified defensive positions and penetrating deep behind enemy lines. The German tanks could advance in hours the same distance that it would take foot soldiers days to cover. Then German infantry followed behind the lines of tanks, sweeping up whatever remained. The style was entirely new and incredibly effective.

After the completion of the invasion of France, Hitler resolved to knock out Great Britain before returning his attentions east. Unfortunately, you can't exactly race tanks across the English Channel, no matter how fast they are! Instead, Hitler ordered an intensive bombing campaign of London and other major metropolitan centers to try to force the British into submission before initiating an amphibious invasion. It didn't work. After several months of bombing while taking heavy casualties at the hands of the British Royal Air Force, Hitler called off the attack, tasting defeat for the first time in the war.

Soon after, Hitler made another foolhardy decision that many historians claim may have very well lost him the war: invading the Soviet Union. Hitler invaded the Soviet Union in the summer of 1941. Like Napoleon before him, Hitler failed to take into account the brutal Russian winters and the hardiness of Russians fighting on their own soil. Despite quick advances, Russia's vastness coupled with Soviet counterattacks soon bogged down the German assault. What was supposed to be a quick knockout of yet another European nation turned into a protracted war with massive casualties on both sides.

Already fighting the Allies in North Africa, a multi-front war was the last thing Hitler wanted, but it was what he now had. This reality stretched German resources and supply lines. The 1944 D-Day invasion marked the beginning of the end for Hitler's Germany. Now fighting multiple enemies on various fronts, it was all Hitler's Germany could do to keep fresh supplies and troops on its battle lines. Though defeat was not a foregone conclusion - indeed, counterattacks like the Battle of the Bulge at times seriously threatened the Allies' push east from France - Germany never regained the territory it lost.

Hitler's motives for war were glory for Germany and a gory end for all other races and ethnicities that he thought inferior - most notably Jews. Hitler felt war was the only viable option to achieve these goals quickly. His most successful tactic was also his most innovative: the blitzkrieg. With tanks racing around fortified positions and destroying and occupying cities and positions behind enemy lines, the attack left Allied forces in both Poland and France reeling.

However, unable to apply his blitzkrieg tactics in an amphibious assault on Great Britain, Hitler and Germany embarked on a disastrous bombing campaign that was called off within months. His next military blunder - underestimating the size of the Soviet Union and the strength of the Soviet army - is what many historians consider the turning point of the war. Now fighting on multiple fronts, especially after the Allied D-Day invasion in 1944, Hitler's German forces were stretched beyond their limits and defeat became irreversible.

After this lesson is over you should be able to:

Lebensraum Concept & History in WW2 | What was Lebensraum?

Soviet Propaganda & Symbols Under Joseph Stalin | How Did Stalin Use Propaganda to Control People?

The Cold War in America: Fears & Impact | How Did the Cold War Affect America?