Bridgett has a PhD in microbiology and immunology and teaches college biology.

Human immunodeficiency virus (HIV) leads to acquired immunodeficiency syndrome (AIDS), an illness that has weighed on global communities for years. Learn about the structure, replication, and results of HIV infections. Updated: 12/13/2021
Create an account

Human immunodeficiency virus (HIV) is the virus that causes acquired immunodeficiency syndrome (AIDS). HIV is a major public health crisis. According to the UN AIDS Program, nearly 37 million people were infected with HIV worldwide as of 2016, with approximately 1.1 million AIDS-related deaths annually.

HIV belongs to the retrovirus family, and the genus lentivirus; this describes how HIV copies its genetic information, and the slow progression of the disease (lento = slow). HIV requires a host cell in order to copy its genetic information and make new virus particles. For HIV to be able to enter a cell, the cell must have the CD4 receptor. This is found on immune cells, such as helper T cells that help activate the immune system to fight infections, and monocytes that act as sentries, eating up any possible foreign invaders and alerting the immune system. 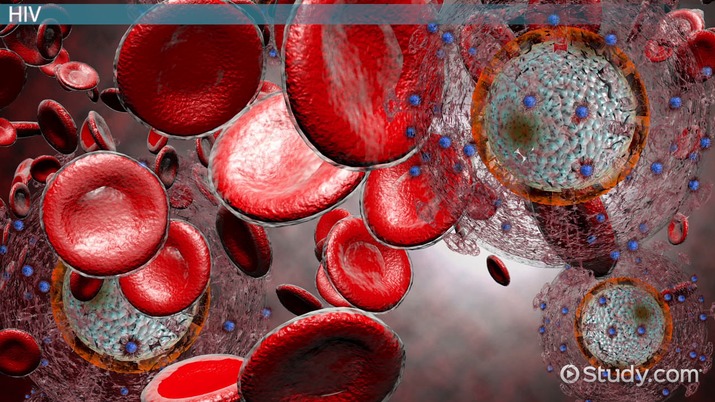 Try it now
Back
Coming up next: HPV Virus: Structure and Function

HIV is a round, ball-shaped virus. It has two single strands of RNA for its genome. The RNA is used to carry the genetic information that is passed on when new HIV particles are produced. This is different than a normal cell, which uses DNA to carry its genetic information.

The outermost layer of the HIV particle is the envelope. The envelope takes part of the host cell's membrane as the virus leaves to make a membrane for itself. The envelope also has some proteins in it that help the virus invade the next host cell. One protein, gp120, helps the virus attach to the CD4 receptor on the host cell. The other protein, gp41, helps the virus fuse with the cell membrane and enter the cell. (Gp stands for glycoprotein, which is a protein with a carbohydrate attached. The number, 41 or 120, tells how big the protein is).

Like all viruses, HIV isn't considered a living thing because it requires a host cell in order to replicate. While HIV is dependent on its host cell, it does supply some of its own proteins for replication, as mentioned earlier.

When HIV enters a cell, one of the first things it needs to do is reverse transcription of its RNA genome. Normally, biology tells us that DNA is converted to RNA in a process called transcription. However, HIV does this backwards and converts RNA to DNA. This is where the name retrovirus comes from - retro means backwards. HIV uses one of the enzymes it brings with it in its matrix, called reverse transcriptase, to do this job.

After the DNA has been made, the next step in the virus' life cycle is integration. The newly made DNA is inserted into the host cell's own genome. This means that even if HIV is not actively making new virus particles, its genetic information is being copied every time an infected cell replicates. This is one of the reasons why it is so difficult to get rid of an HIV infection - the virus can hide in these so-called reservoirs when the environment is not good for making new viruses. Once the environment has improved, it can re-activate and make more viruses again.

Once the HIV DNA has integrated into the host cell's DNA, the virus can start to replicate. For this, HIV uses the host cell's replication machinery to turn its DNA into viral RNA. The viral RNA is then translated into protein. All of the proteins the virus needs will be made at this stage, including the envelope, matrix, and core proteins, as well as the reverse transcriptase enzyme. These proteins, along with the RNA, package together to form new viral particles that will be released to start the infectious process all over again.

The time from initial infection with HIV to the patient experiencing symptoms takes a long time. This is where the term 'lentivirus' comes from. Once the virus infection has been established, it begins to kill off immune cells that work to help protect the body from infection. Dishearteningly, the more an infected cell is activated to fight other infections, the more quickly HIV can replicate. Likewise, the more a helper T cell is activated, the more easily it can be infected by HIV.

As more and more immune cells are killed, the patient becomes less able to fight infection. A patient is considered to have AIDS when his or her T cell number decreases below 200 per cubic millimeter, and has infections usually associated with having a poorly performing immune system.

Anti-retroviral therapy helps slow down HIV replication be preventing the virus from either turning its RNA into DNA, or from leaving the host cell. Combination therapies are most effective. Because we do not have a way to completely cure HIV infection yet, this therapy must be taken for the patient's entire life.

HIV is a spherical virus. It has a protective envelope, which comes from the host cell's membrane. The proteins gp120 and gp41 help HIV enter a cell to infect it. The viral matrix helps anchor the envelope proteins to the rest of the virus particle. The core contains the HIV genome and some proteins needed for infection.

HIV is a retrovirus, meaning it must transform its RNA genome into DNA within a host cell. It can either hide its DNA inside the host cell's genome, or it can make new viral particles to continue the infection. HIV primarily attacks immune cells, which results in the host becoming unable to fight off infections.

As you come to the end of this video, you should be able to: