Bases and acids serve different purposes. When combined, they form a salt. Discover more about acids, bases, and salts, including where they are found in the home. Updated: 11/23/2021
Create an account

What Are Acids, Bases and Salts?

An acid is a chemical substance with a pH less than seven. An acid tends to dissolve certain metals, is corrosive, and tastes sour. A base, or alkali, is the opposite of an acid: it's a chemical substance with a pH greater than seven. For the record, seven is right in the middle, and is considered to be neutral. Bases are typically caustic, slippery, and taste bitter.

When an acid and base are mixed together, they neutralize each other and the final mixture has a pH in the middle of the scale. We can test whether something is an acid or base using indicator liquid or paper. Litmus paper is one type of indicator, and when put into a liquid acid or base, it turns blue for an acid, red for a liquid, and green for neutral.

When an acid and a base are reacted together, they form a salt. Table salt, or sodium chloride, is one example of this, but there are many, many salts in chemistry. Generally, when this reaction happens, the hydrogen that makes the acid an acid is replaced with a metal. So for table salt, hydrochloric acid (which is hydrogen and chlorine bonded together) loses its hydrogen, which is then replaced with the metal sodium, to make sodium chloride. 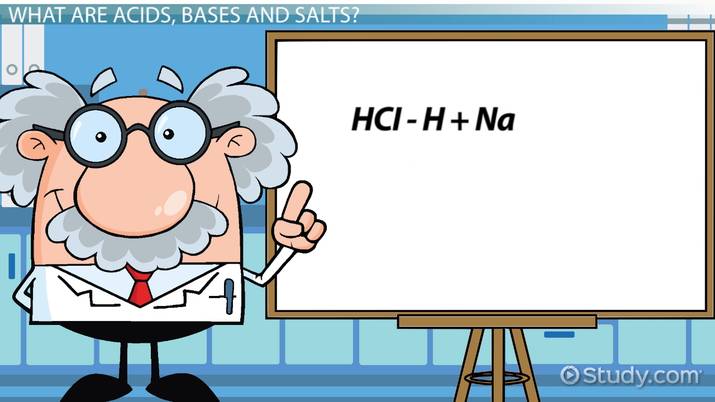 Coming up next: What Are Radioactive Materials? - Definition, Examples, Uses & Benefits

Acids, Bases, and Salts in the Home

There are many acids, bases and salts in a modern home. For example, an antacid is a weak base that neutralizes extra stomach acid to relieve a stomach ache. Toothpaste contains salts, though they also contain bases. Contact lens solution contains salts too. Shaving cream and lotion are weak acids, while vinegar and toilet bowl cleaner are strong acids. Bleach is a strong base, and has a violent neutralization reaction when mixed with an acid, creating toxic gases. Window cleaners containing ammonia are weak bases. Cosmetics can be either acidic or basic, but are more often than not acidic. Sodium bicarbonate, as found in baking soda, is a basic salt, meaning it formed a salt, but it wasn't enough to fully neutralize it, so it still is partly basic.

An acid is a chemical substance that tends to dissolve certain metals, is corrosive, and tastes sour. A base, or alkali, is the opposite of an acid and is typically caustic, slippery, and tastes bitter. When an acid and a base are mixed together, they neutralize each other, forming a salt.

The Activity Series of Metals | Predicting Products of Chemical Reactions

What are the Basic Features of Vertebrates?

Prototype Overview & Function | What Is a Prototype?

How Is Salt Made? - Lesson for Kids

Common Acid Types & Examples | What is Acid Used For?