Lauren has taught intermediate reading in an English Language Institute, and she has her Master's degree in Linguistics.

Hornworts are a plant type that is a non-vascular bryophyte with rhizoids. Learn about the classification of hornworts, group distinctions, overall characteristics, and some interesting facts. Updated: 01/20/2022
Create an account

You're probably familiar with the idea of scientific names for living creatures, but have you ever thought about how a species gets classified? The truth is that there can be a lot of debate surrounding species classification. A species might be moved to a new genus or family several times, and the classification may even be different depending on who you ask! This is the case for hornworts.

Hornworts are one of three types of plants known as bryophytes, along with mosses and liverworts. They're non-vascular, which means they lack the xylem and phloem tissue that other types of plants have for moving water and nutrients. As a result, they grow very low to the ground.

Unlike mosses and liverworts, which have thousands of species, there are only about 100 to 150 species of hornworts. Despite the low number, classification is an ongoing source of debate among scientists, and the number of families and genera is not always agreed upon. The exact number of species is not even certain! 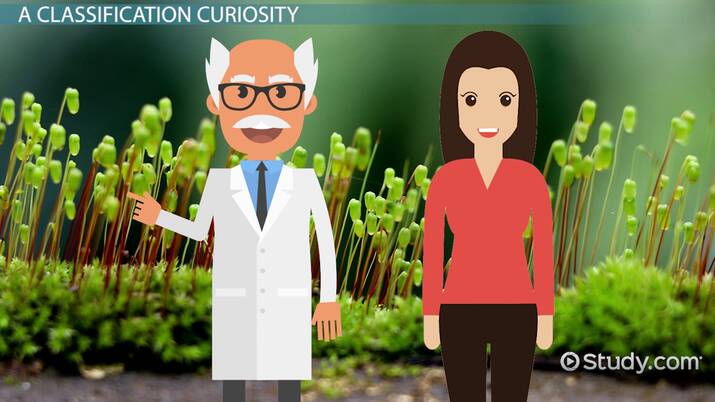 Try it now
Back
Coming up next: Bryophytes: History, Habitat & Facts

Under one of the more widely accepted classification schemes, there are six different genera of hornworts: Anthoceros, Dendroceros, Folioceros, Megaceros, Notothylas and Phaeoceros. Members of these genera share a lot of the same characteristics, with a few notable exceptions.

The most significant differences can be seen in Notothylas. This genus tends to be yellowish instead of dark green. Their sporophytes, the stalks with their spores at the top, are different as well. In most hornworts sporophytes are tall and thin, resembling a long horn. In fact, that's where they get the name ''hornwort'' (''wort'' simply means ''small plant''). However, sporophytes in Notothylas are short, thick, and slightly curved, and the sporophytes do not grow continuously as they do in other species.

Other differences come from habitat. Members of Anthoceros typically grow on the banks of rivers or other bodies of water, while members of Dendroceros grow on the bark of trees or sometimes in swamps. Dendroceros also differs in shape, growing in ribbon-like branches with wavy edges. Other species of hornworts often grow in a more curled and round shape.

In general, hornworts share many characteristics, including the typically tall and thin sporophyte shape. One similarity is that most hornworts only have a single large chloroplast (which is the green organelle used to capture energy from sunlight) in each cell. By contrast, liverworts and mosses usually have several chloroplasts per cell. The ability of hornworts to store carbon dioxide (CO2) for later use in photosynthesis also sets them apart from liverworts.

Hornworts generally live in wet, humid places. Within this habitat requirement, they can be found on rocks, in soil, or on tree bark, but they do need the humidity to survive. This is because of their lack of vascular tissue as well as the fact that they have no true roots. Instead, they have small, hair-like rhizoids that keep them firmly attached and help with water absorption.

Hornworts are fascinating plants. For one, they all, regardless of genus, have a symbiotic relationship with a bacteria called Nostoc. The bacteria collects and grows in small pockets inside the hornwort and supplies the plant with nitrogen. In return, the hornwort provides the bacteria with carbohydrates.

Hornwort sporophytes are also an interesting feature. In most species, they can grow to be over 10 centimeters (4 inches) high! The sporophytes are growing continuously in all genera except Notothylas. The growth occurs at the base of the sporophyte stalk and pushes it upwards.

All right, let's take a moment or two to review. As we learned, hornworts are a type of bryophyte, along with mosses and liverworts. We also learned that they're non-vascular, meaning that they lack the xylem and phloem tissue that other types of plants have for moving water and nutrients, and there are only about 100 to 150 different species contained within six genera. Notothylas is notably different in color as well as the fact that its sporophytes are short and thick and don't grow continuously. Other differences between genera include habitat, although all hornworts prefer humid areas, typically near water.

Hornworts are different from other bryophytes because they usually have only one large chloroplast per cell, which is the green organelle used to capture energy from sunlight, and they're able to store carbon dioxide. Hornworts have rhizoids instead of true roots, which are hair-like structures that keep them firmly attached and help with water absorption. Interestingly, they have a symbiotic relationship with a bacteria called Nostoc, and in most species, the sporophyte grows continuously from the base.

Cytokinins in Plants Function & Features | What are Cytokinins?

Importance of Fungi Overview & Examples | Why is Fungi Important?

Cytokinins in Plants Function & Features | What are Cytokinins?

Importance of Fungi Overview & Examples | Why is Fungi Important?