If I were to ask you what comes to your mind when you hear the word protein, you might think about the dietary proteins you get from the foods you eat, such as steak and eggs. Or, if you have been studying the way the body works, you might think about proteins found inside of you and the different roles they play. There are many different types of proteins, and they are the true workhorses of the body, needed for building structures and maintaining life, yet all proteins have things in common.

For example, break any protein down, and what you will find are a bunch of amino acids bonded together. This is because amino acids are the basic building blocks of proteins. In this lesson we will take a look at how amino acids come together to form proteins. 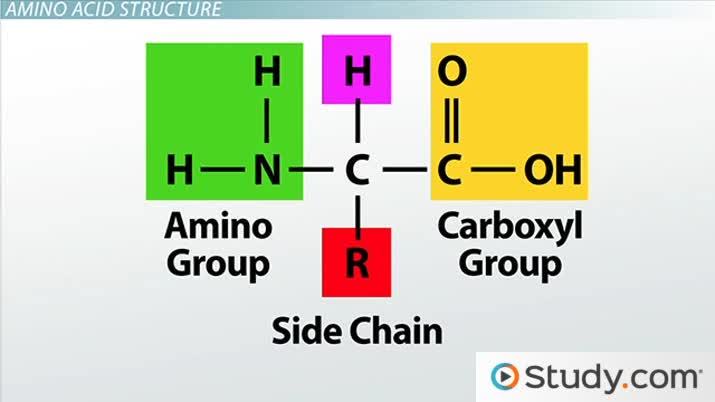 Regardless of whether a protein is found in the food on your dinner plate or within your body, it is made up of a chain of amino acids. There are 20 different amino acids needed by your body; some of them are made in your body while others must come from your diet.

So we have a bunch of C's, some O's, H's and N's in the basic structure of an amino acid, which means the most common atoms in amino acids are carbon, oxygen, hydrogen and nitrogen, but you probably also noticed the R Group. This represents a side chain, and it is the side chain that makes the 20 amino acids different from each other. However, what we are concerned about in this lesson is how the different amino acids come together to form proteins. So let's stay on that track.

We mentioned that some of the amino acids are made by your body, while others come from your diet. Now, we don't really think in terms of eating different amino acids. What we eat is protein, which is found in foods like meat, fish, eggs and some plant foods, such as beans and nuts.

Your digestive system takes in these protein-containing foods and breaks them down into the individual amino acids, which are then taken up by your body cells and reassembled into new proteins, much like a builder might demolish a building and then salvage the parts to build a new structure.

Inside your cells, the individual amino acids can bond together by forming a peptide bond, which is simply a chemical bond that joins amino acids together. More specifically, peptide bonds join the carboxyl group of one amino acid with the amino group of another.

Of course, simply joining two amino acids together is still a long way off from having a protein. More amino acids need to join up until you have a chain of amino acids joined together by peptide bonds, which gives us a polypeptide. Polypeptides are important to the body and can be found in places like the oxygen-carrying hemoglobin of your blood.

Now proteins, well, they are also long chains of amino acids, and there is some debate over the distinction between a small protein and a polypeptide, yet we do see that some larger proteins can contain many polypeptides folded and coiled together.

Let's review. Proteins are the true workhorses of the body, needed for building structures and maintaining life. The basic building blocks of proteins are amino acids.

The 20 different amino acids needed by your body all have the same basic structure, which is a central carbon atom attached to a hydrogen atom, a carboxyl group, an amino group, and a variable R group or side chain that gives the amino acid its uniqueness.

A peptide bond is a chemical bond that joins amino acids together where the carboxyl group of one amino acid bonds with the amino group of another. This forms a dipeptide, which is simply a compound consisting of two amino acids. It requires the loss of water to form a bond, which is a process called a dehydration synthesis reaction.

More amino acids can join up in a similar fashion until you have a chain of amino acids joined together by peptide bonds, which results in a polypeptide. Proteins are also long chains of amino acids, and some larger proteins can contain many polypeptides folded and coiled together.

Once you have finished this lesson you should be able to:

Vitamins We Need: Their Importance & Sources

Protein Structure Function & Factors | What Determines the Shape of a Protein?

Nuclease & Exonuclease Enzyme Function & Activity | What Is a Nuclease?

What is Fatty Acid? - Composition & Structure

What is RNA? | Function, Importance & Uses