What is Cognitive Dissonance?

Take a moment to think about the following situation. You're at work, and you notice that it appears to be okay if people take a longer lunch than one hour. The company and the supervisors do not seem to address the issue, yet you believe you should only take a 1-hour lunch, as that is what the employee manual states. However, if the company seems okay with it, you can see how you might be conflicted regarding what to do.

What you are experiencing is cognitive dissonance, or the uncomfortable tension that comes from holding two conflicting thoughts in the mind at the same time. From our example, you believe you should only take an hour lunch as that is 'right,' but it appears as if the company is okay with you taking more than an hour lunch.

The only thing that can happen now is for you to work through the cognitive dissonance, and that is exactly what we'll be discussing. 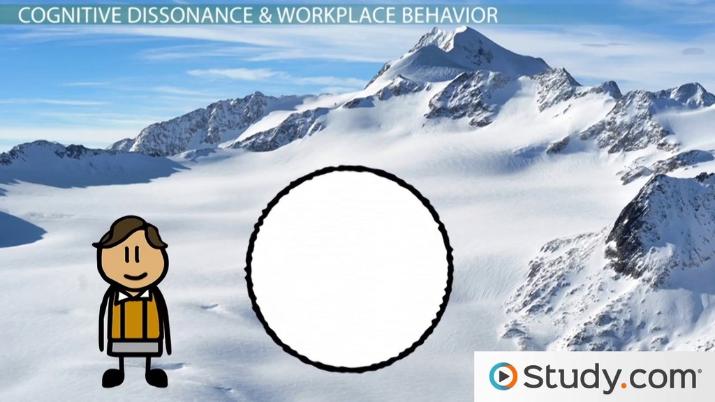 Try it now
Back
Coming up next: Generational Values in the Workplace: Differences and Dominant Values

When we look at our example, we can see that for the most part you are torn between two conflicting thoughts. That conflict can only play out in one of three different ways:

The first aspect we can look at is changing your behavior. If we have this internal conflict, we can at times change our behavior to help us deal with the conflict at hand. In the case of the long lunch hour, we might decide we too can take a longer lunch and thus eliminate the cognitive dissonance that is present in our minds. By removing one of the conflicting issues, in a sense making a decision or choice between the two, we leave ourselves with no choice and thus no conflict.

Justify our behavior by changing the conflicting cognition

Potentially, we will not change our behavior. Maybe we believe it is right and correct and not something we should change. Thus, we will begin to justify the behavior, or, for lack of a better term, make it right in our own minds. Maybe we think all the people that take those long lunches are just not going to be here long because they are not showing the company they care. Here, we are justifying why we are acting the way we act and again removing one aspect of the conflict.

We can add new concepts, ideas, or behaviors to explain or justify conflicts - to transform nonsense into sense. For our issue that we have been talking about, we might start to believe that the people that take the long lunch maybe work late each day, and that is why they take the longer lunch, and maybe the company is okay with that. In a sense, you added a new cognition to the conflict, and that one justified the cognitive dissonance that you had going on in your mind.

Changing behavior does not happen overnight, and it is indeed an attitude shift for a person. Think of our lunch example: if a person changes their behavior and starts taking a longer lunch, their attitude will change as well. It is somewhat of a snowball effect. Basically, if it's okay for a person to change their behavior regarding lunch, a person could also think that other behaviors should or could change.

If they have always been a very rigid, by-the-book person and made this change, it is easily understood how their attitude will change. They will no longer look at everything like it is a hard and fast rule but now look at how others interpret the rule and act accordingly. This is a huge shift in attitude and will impact their behavior at work.

Justifying a change in the conflicting cognition can alienate a person from others since they will not agree with or believe in the other person's actions. They justify their own behavior, which in a sense makes the behavior of others wrong. Taking that a step further, it is apparent that if someone justifies their behavior, they are discounting another's behavior. Put those people in a meeting together (or on the same team) and the person who has justified their behavior may have an attitude that the other individual is less than professional. They may not even take that person seriously.

In many ways, they have rectified the cognitive dissonance in their mind by justifying their own actions as right, which puts the actions of the other person in a different light.

If we justify our behavior by adding new cognitions, it can lead to an attitude of acceptance for just about any issue. Think of it as backpedaling and accepting a positive reason for the cognitive dissonance one is feeling. The term 'turn the other cheek' comes to mind. A person can have cognitive dissonance with a situation and, for lack of a better term, explain it away.

This leads to an attitude of overall acceptance, but in the professional world it can also lead to a person becoming a doormat for others. Not every issue will turn out this way, but if a person takes this course every time they experience cognitive dissonance, they will begin to develop an attitude of acceptance as they explain away why there is discord to start with. It might be valiant to be that person, but that attitude shift means you are accepting the actions of all those around you, and that might not always be the best method to take.

The uncomfortable tension that comes from holding two conflicting thoughts in the mind at the same time, known as cognitive dissonance, is something we all deal with. There are only three ways that we can rectify or address the issue in our minds. Those are:

No matter which direction or method we take, our attitudes will be impacted. Every one of these solutions is rooted in how we look and act towards something, which will impact our emotions and thus our attitudes. The goal in the professional world is to deal with that change without it becoming a negative issue at the workplace. In many cases, that's easier said than done.

Upon completion of this lesson, students should recognize that cognitive dissonance in professional settings is conflict that depends on changed behavior or changed thinking by one or all involved in the conflict.

The Theory of Attribution In Organizational Behavior: Definition and Three Determinants

Monochronic vs. Polychronic Communication Styles | What Are Chronemics?

Cultural Iceberg Model & Theory | What is the Iceberg Theory?

Cognitive Dissonance Experiments | What was Festinger and Carlsmith's Experiment?