Christine has a PhD in biomedical engineering.

A cell is kind of like a city. It has several moving parts and jobs that need to be done. And just like a city, a cell needs energy to function. But instead of gas or electricity, cells need sugar. Sugar is typically present outside the cell in the form of glucose, a sugar molecule used by most living things for energy, and it must get into the cell to be used to generate energy. However, the cell membrane is kind of like the wall of a medieval city. It's difficult to cross without special permission, and even a molecule as important as glucose needs help getting across. 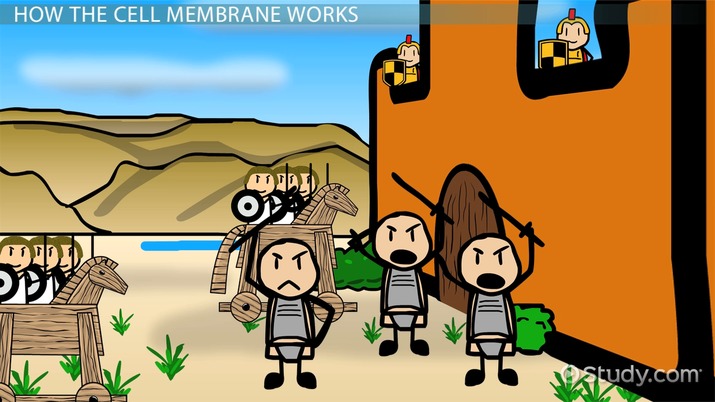 Coming up next: How Does the Cell Membrane Maintain Homeostasis?

How the Cell Membrane Works

One of the ways materials can enter the cell is through special proteins that are embedded in the membrane. These proteins act like gates to allow large molecules, like glucose, to get across the membrane. If glucose tried to cross the membrane without the protein gate, it would take a very long time.

Membrane proteins that allow molecules like glucose to cross into the cell are called transporters. These proteins are transmembrane proteins. They have a hydrophobic region that secures the protein inside the membrane, and hydrophilic regions that are located inside and outside the cell.

The glucose transporter has a special binding site for glucose in its hydrophilic region. When a glucose molecule binds to this site, it communicates to the transporter that the glucose is ready to move across the membrane. The protein can then change shape, or undergo a conformational change, to allow the glucose to enter the cell, similar to the opening of a gate. The glucose molecule never has to touch the hydrophobic portion of the cell membrane.

Let's review what we've learned. Glucose, a sugar molecule used by most living things for energy, needs to get into the cell because it is a major source of energy. But the cell membrane stands in its way, as it should; remember that it protects the cell from invasion, marks its boundaries and controls what can get in and out, similar to a walled medieval city. However, it would take too long for glucose to cross the cell membrane on its own through a double layer of lipids called a bilayer. This is because the hydrophobic region of the cell membrane makes it really hard for glucose to cross without a little help.

Why Does Water Pass Quickly Through the Cell Membrane?

Glycoprotein Function in the Cell Membrane