Jayne has taught health/nutrition and education at the college level and has a master's degree in education.

DNA carries the genetic information of an organism needed for expression and replication. Discover how DNA replicates in 7 steps, how different cells have different rates, and how DNA has its own proofreading system for perfect replication. Updated: 11/05/2021
Create an account

How Does DNA Replicate?

DNA (deoxyribose nucleic acid) carries all the genetic information needed to re-create itself and to pass on the characteristics of the organism. When a cell reproduces, it needs to pass all of this genetic information on to the new cells. Before reproduction can take place, a cell must replicate, or copy, its DNA.

The structure of the DNA molecule makes replication easy. Each side of the double helix run in opposite directions - one up, one down. This gives the structure the ability to unzip down the middle, and each side serves as a template for the other side. During actual replication, the helix doesn't unzip completely. A smaller area, called a replication fork, is unzipped instead. 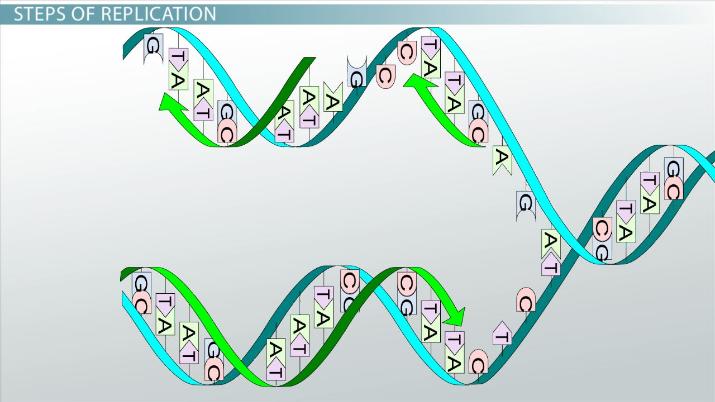 Try it now
Back
Coming up next: Function of Enzymes: Substrate, Active Site & Activation Energy

What are the steps of replication?

Different types of cells replicate at different rates. Some, like those in hair, fingernails, and bone marrow, divide constantly. Others, like those in the heart, muscles, and brain, go through several rounds of replication and cell division and then stop. Some others, such as skin and liver cells, stop replicating and dividing but will start again to repair injuries. For cells that do not constantly divide, the cues to tell them to divide come in the form of chemicals, such as hormones, or from the environment.

The replication of DNA needs to be perfect to preserve genetic information. Occasional mistakes do happen and then a DNA polymerase enzyme proofreads the paired nucleotides. When a mismatch is found - for example, adenine is paired with cytosine - the incorrect nucleotide is removed and replaced.

Some mistakes will remain. If the cell has a lot of mistakes, and the DNA is too damaged for the enzymes to fix it, the cell either stops dividing or it self-destructs. Still other mistakes in replication will remain and cause changes in the genetic information carried by the DNA.

Let's sum up. Before reproduction can take place, a cell must replicate its DNA. The double helix separates, unwinds, adds new nucleotides, seals up into two new long strands, and the new copies wind themselves up into a new double helix.

Some cells replicate and divide constantly, like hair, fingernails, and bone marrow. The cells in the heart, muscles, and brain go through several rounds of replication and division, then stop. Others stop replicating and dividing but will start up again to repair injuries.

Mistakes in replication do occur. Some can be repaired, others cause the cell to self-destruct, while still others cause changes in the genetic information carried by the DNA.

After you are finished with this lesson you should be able to:

Try it now
Back
Create an account
How Does DNA Replicate?
Start today. Try it now
Life Science: Middle School