In physics, matter is a substance that has mass, volume, and fills space. Learn how light and matter interact, and review binding energy, energy levels, and excited atoms and photons to understand the relationship between light and matter. Updated: 10/28/2021
Create an account

If you could thank two things for your existence, what or whom would you thank? If you're a biologist, you'll likely thank mom and dad. If you're a chemist, you'll probably thank carbon and water. If you're a physicist or astronomer, you'll be bowing down to light and matter.

You wouldn't be able to see the screen right now, nor would you exist, if light and matter did not interact, and while this lesson's points are no light matter, I'll certainly try to make it easy on you as we review the fundamentals of how these two things interact. 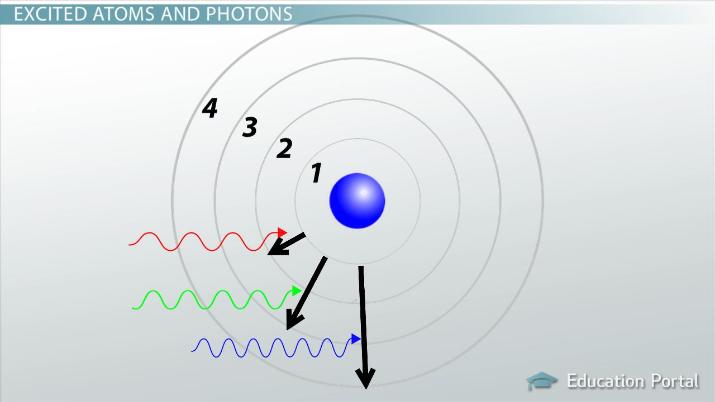 Matter is composed of atoms. This lesson will use the hydrogen atom as its main example, not only because it's simpler but also because about 90 percent of the universe's atoms are hydrogen atoms.

An electron orbit in an atom is actually a representation of a certain amount of binding energy. Binding energy is the amount of energy necessary to pull an electron away from an atom. So, if an electron's orbit is close to the atom's nucleus, which houses the protons and neutrons, it's said to be tightly bound, and thus more energy is necessary to rip it away from the atom, just like it takes a lot more energy to pull apart a tightly wound knot. If an electron's orbit is far away from the nucleus, then it has a smaller binding energy.

As a result of all of this, orbits are technically referred to as energy levels, one of a certain number of energy states an electron can occupy in an atom, where different energy levels are related to different distances of an electron from an atom's nucleus.

The lowest possible electron energy level, like the smallest and most tightly bound orbit, is called a ground state, and each atom has a unique set of these energy levels. But electrons aren't imprisoned in an energy level. You can move an electron from one energy level to another with a jolt of energy. The energy you would need to supply for this move would need to make up the difference between the two energy levels in question.

It's like you going up a flight of stairs with a heavy weight. The bottom of the staircase is like the ground state. From there, if you wanted to go up one energy level with the weight (one step), you'd need a supply of energy to get your muscles to move up. With every step, farther and farther away from the original energy level, you'll need to supply more and more energy to move up into a higher step, a higher energy level.

Atoms can become excited for more than one reason. If two atoms collide, their electrons can be simply knocked into a higher energy level. This commonly happens in hot gases where atoms are buzzing about like crazy and are constantly running into one another. Another way by which an atom can become excited has to do with light. If an atom absorbs a photon, a packet of electromagnetic waves having a specific energy, it might become excited.

I say 'might' become excited for a reason. Only a photon with just the right amount of energy can get an atom excited. If there's too much or too little energy provided by a photon, the atom can't absorb the photon, and the atom won't become excited.

But like an excited fan doesn't stay excited for long and sits back down into his chair, an excited atom cannot stay excited ad infinitum. That's because an excited state is unstable, and the atom doesn't like that. So, to return to a state of normality, the atom will release the energy it absorbed, and the electron will return to a lower energy level. As this happens, the atom emits its excess energy as a photon with a wavelength corresponding to the energy difference between the levels it jumps from and to.

Such a process helps physicists and astronomers figure out the chemical composition of a gas by identifying the wavelengths of light that are absorbed and emitted by that gas. Since each atom has a unique set of energy levels, it only absorbs and emits certain wavelengths of light, and those wavelengths are like a fingerprint unique to each kind of atom in the gas.

However, things aren't as simple as this lesson may imply. Remember, it's no light matter. Another lesson will explain for you how temperature is involved in influencing an astronomer's ability to figure out the chemical composition of a star.

A star is made of gas. That gas is made of atoms. Those atoms are made of protons, neutrons, and electrons.

The electrons orbiting the nucleus, which houses the protons and neutrons, do so at set, or permitted, energy levels, one of a certain number of energy states an electron can occupy in an atom. The lowest possible electron energy level is called a ground state. The lower the energy level, the higher the binding energy. Binding energy is the amount of energy necessary to pull an electron away from an atom.

Electrons can move from one energy level to another with a jolt of energy, by way of collision or by absorbing a photon. A photon is a packet of electromagnetic waves having a specific energy. An atom that absorbs a photon with exactly the right amount of energy will become excited.

Since each atom has a unique set of numerous permitted energy levels and consequently, more than one wavelength that it can absorb and emit, the kind of light absorbed or emitted by a gas can clue an astronomer in to the chemical composition of that gas.

At the end of the video, your goal should be to:

The amount of energy necessary to pull an electron away from an atom is known as:

Types of Motion: Lesson for Kids

Vibrations and Waves: Energy and Motion