Joseph has a master's degree in literature as well as alternative teaching and ESL educator certifications. He has worked with middle school, high school, and college students in writing and language arts.

In literature, a theme is a message or idea explored in a story line. Learn how fiction draws on themes from other works. Review recycled literary themes, take a closer look at ''Cinderella'' and ''Ella Enchanted,'' consider a 21st century ''Cinderella,'' and recognize the appeal of classic stories. Updated: 10/21/2021
Create an account

'There's nothing new under the sun.' We've all heard it. It's especially true in literature. Authors recycle stories and their themes all the time, presenting them in new ways for contemporary audiences. Even Shakespeare used existing stories to write some of his plays!

Although we read the same stories over and over again, they never fail to entertain us. Think of all the versions of Romeo and Juliet that we've read and seen on film, or the endless versions of the Grimm fairy tales that are unfailingly published and released at theaters. These stories turn up time and time again because they have universal themes.

In literature, a theme is a message or concern present throughout the work. For example, one of Romeo and Juliet's major themes is the nature of love. Early in the play, Romeo claims to be madly in love with Rosaline. But he quickly forgets her and falls in love with Juliet at first sight. So, what is love? Are any of the paired characters really in love? Are Romeo and Juliet's parents married for love or money?

Of course, Romeo and Juliet is a dense play with many themes, but the nature of love is certainly high on the list. And there's a reason it shows up in so many popular stories. The most universal themes are broad themes - ones that can be experienced by people regardless of their age, beliefs, or where they live.

Who, for example, hasn't contemplated the nature of love, rooted for the underdog, or been affected by some conflict between good and evil? Think of some of the most popular stories you may have read or heard, and you'll probably identify several classic themes within it.

One fairy tale, in particular, has appealed to people for generations and has seen many resurrections. The Brothers Grimm may have published the 'Cinderella' story as a warning against lying, deceitfulness, and being plain old mean. But the story has different potential themes for different audiences, as we'll examine. 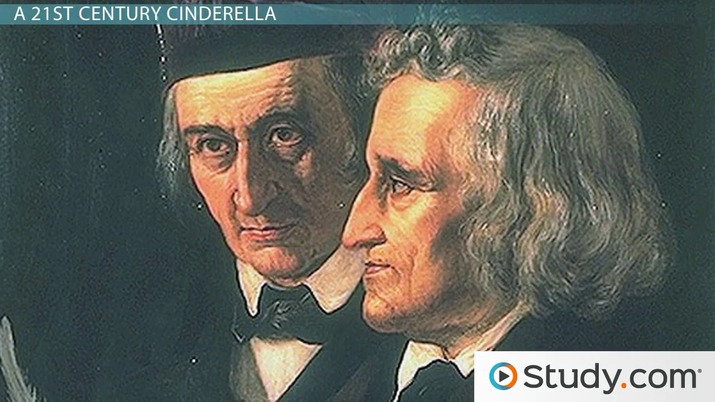 Coming up next: How Fiction Draws on Patterns and Events from Other Works

There are, of course, many parallels between Ella Enchanted and 'Cinderella.' The mothers in both stories die early, leaving Ella and Cinderella vulnerable to the world's cruelties. In fact, parenting plays a large role in both stories. It's interesting to note that the fathers - who we might assume would be influential characters - have almost no effect on either story's progress, especially once they both marry mean, influential women with two just as mean daughters.

Both stories also have princes whose fathers hold three-day festivals to find them that perfect wife. This is an interesting commentary on the role of women in both stories. With the exception of fairy godmothers, they serve either as wives or the stories' evil characters. Ella and Cinderella are often acted upon rather than acting on their own. There are no shining examples of female empowerment. Until, that is, Ella Enchanted diverges from 'Cinderella.'

Ideas about the role of women in society have changed drastically. And ideas of self-determination have grown with the spread of democratic ideals. But, what does all this have to do with the character of Cinderella? After all, she's not a real person who's experienced all these changes.

Authors, though, reflect the world they live in when they write. While the Grimm brothers were collecting stories that already existed, those stories definitely reflected the era's zeitgeist, or the beliefs and ideas of that particular time. Think about Romeo and Juliet placed in contemporary Los Angeles. Would they be spouting, 'Wherefore art thou?' I don't think so!

So, new versions of stories tend to reflect the realities of their authors' times. This is why although Ella in Ella Enchanted is cursed to obey orders from infancy; she tries with her might to fight against that curse. Do we ever see the Grimms' Cinderella fighting against anything that happens to her? She does a lot of crying. But fighting … well, she's a pretty tame character.

Also, Levine creates Ella as a very intelligent young woman. Rather than being interested in cleaning and cooking, she's gifted with natural skills in composition, math, and languages. In fact, it's her natural ability to pick up languages that saves her more than once throughout the novel.

Unfortunately, for the Grimms' Cinderella, there's no mention of her education or any intellectual ability. Who knows, maybe she was secretly writing the next great European novel. But, that never shows up in the story.

Most importantly, although Ella marries the prince just as Cinderella does, Ella does it on her own terms. In the Grimm version of 'Cinderella,' the prince throws out tar on the third night of the festival to keep her from running away, which is how she loses her fancy slipper. Once he finds her again, he rides off with her, some talking pigeons declare that she really is the true Cinderella, and she marries him to live happily ever after. When did she get any say in all of this?

Ella, on the other hand, is ordered to marry Prince Char. Remember that pesky curse that makes her obedient? She's physically unable to disobey any direct order. She fights this order, though, with all her might and finally breaks the curse.

Then she marries the prince because she wants to, not because she's been ordered to. Unlike Cinderella, she gets married on her own terms. And more importantly, she's gained free will. She can do as she pleases now that the curse is broken. She is definitely a Cinderella for the 21st century.

But, why the changes? Think again of Levine's primary audience. Would young women be more inspired by the story of a poor girl crying and being swept away by a trickster prince or the story of a bright young woman overcoming external forces in order to make her own decisions? Different times, different stories.

The Appeal of Classic Stories

So, if the original story doesn't fit our contemporary ideals, why go back to it in the first place? Well, remember those universal themes we considered earlier? They're still present in 'Cinderella:' true love, good versus evil. And, come on, who doesn't love a happy ending?

This and other popular stories have lasted for centuries for a reason. They appeal to our desire for everything to make sense. Think about it. How often do events in real life turn out just like we wish they would? How often does the nice guy really finish first? Probably not as often as we'd like.

So, stories satisfy that need for order and cosmic justice. Sometimes, they just need a little sprucing up for new audiences. Cinderella will undoubtedly make many more appearances through the coming centuries. Maybe one day she'll be a princess warrior in outer space. Who knows where the future will take our most cherished stories?

Many stories created today are remakes of classic stories that people have told and written for a long time. These stories have stayed alive because their themes, or overarching concerns and messages, are universal. In other words, people can relate to them no matter who or where they are.

When authors recycle these stories, they tailor them for their target audiences. That's why Ella is quite different from Cinderella even though their stories have many similarities. She reflects our contemporary zeitgeist, or spirit of the times. Young women, and people in general, for that matter, nowadays are more likely to identify with the clever and independent Ella.

But we keep coming back to this and other stories because they give us a way to make sense of events. In a world where the good guy sometimes finishes last, it's comforting to read about the good guy, or smart young woman, winning everything.

At the end of the video, try to set a goal to:

How Fiction Draws on Themes from Other Works
Related Study Materials

Fiction Types & Examples | What is Fiction?