The work of Meselson and Stahl in the 1950s helped us to understand that DNA replication occurs by a semi-conservative model, but it doesn't explain all of the intricate molecular movements that are necessary in order to achieve such a complicated feat. Remember that many scientists didn't agree with the semi-conservative model at first. In fact, they didn't agree with Watson and Crick's DNA model altogether because it was so elaborate. They argued that even if a molecule like this did exist in our bodies, there'd be no way for it to make copies of itself. Once they discovered the truth about the semi-conservative model, they had even more tough questions to answer. The biggest question they had was: how could a twisted, convoluted molecule like DNA open itself up for semi-conservative replication?

Remember that the semi-conservative model states that one parental strand of DNA is conserved in each of the new daughter DNA molecules. The parental strand, which is the original DNA strand, acts as a template for the daughter strand, or a strand of newly synthesized nucleotides. In order for that to happen, DNA must actually split down the middle so that all of the nitrogenous bases are exposed. Once the bases are left out in the open, then new nucleotides can be added on. Remember that there is a rule about which nucleotides pair with which; we call it the rule of complementary base pairing. So the bases adenine and thymine will always pair together, and cytosine and guanine will always pair together. That means that as the new nucleotides are being added on to form the daughter strand, they can only add on at the places where they match a complementary base. So still the question remains: how do we actually get in there to the center of the DNA double helix, unwind all the twisted strands and expose those nucleotides in the first place? 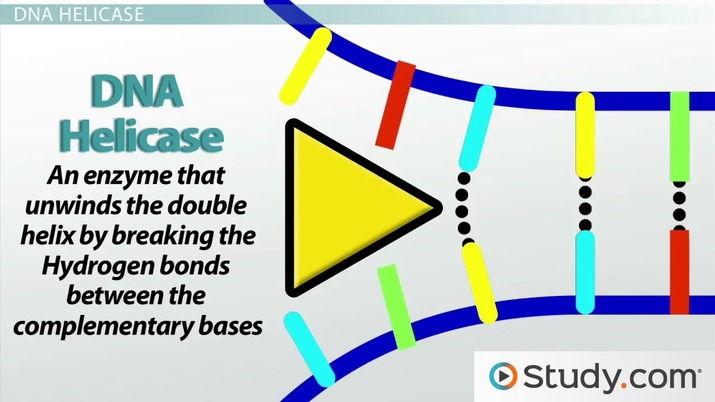 Coming up next: How DNA Polymerase and RNA Primase Initiate DNA Replication

How to Unwind the DNA Double Helix

Well, it looks like we've got some bond-breaking to do. Remember that the nitrogenous bases in DNA are linked in the center by hydrogen bonds. Hydrogen bonds are generally weaker than all the other bonds in the molecule, so this is a perfect spot to start separating the nucleic acid strands. But keep in mind that DNA is a very important molecule; it holds all of our genetic information, and it can't just split open at the drop of a hat. It needs a specialized helper to assist in orchestrating that movement. That helper is an enzyme that we call DNA helicase.

DNA Helicase and Its Function in Replication

DNA helicase is an enzyme that unwinds the DNA double helix by breaking the hydrogen bonds between the complementary bases. It's easy to remember the name because it has part of the word helix in it. You can imagine it sort of as a wedge that forces apart the two strands, just like the slider on a zipper wedges apart the two long rows of teeth. DNA helicase is responsible for taking apart our DNA double helix.

Just like a zipper makes a Y-shape with the two strands of teeth, the action of DNA helicase results in a Y-shaped fork in the molecule, which we call a replication fork. The enzyme attaches to the DNA at the origin of replication, which is the place where the process of DNA replication begins. As helicase moves down the length of the strand, the replication fork moves along in its wake. You can imagine that by the time it gets to the end of the strand, all the parent DNA had been split in two.

Now there's only one more problem with this model of how DNA splits apart for replication. An actual DNA strand isn't just a few hundred nucleotides long; in the human genome, there are over 3 billion nucleotides to replicate in every single cell. In order to keep up with the needs of our bodies, we have to add about 50 nucleotides every second. We could never get that much replication done quickly enough by just starting at one end of the DNA strand and 'unzipping' straight toward the other. So, in reality, DNA replication starts at many different places throughout the parental strand. There are many helicase enzymes attaching at many different origins of replication. This creates a whole line of replication forks, which end up making 'bubbles' where the parent strands are separated in isolated locations. These bubbles grow and grow as replication continues until all of them merge together and two entirely new complete DNA strands are made.

Let's review what we've learned so far. DNA helicase is the enzyme that unwinds the DNA double helix by breaking the hydrogen bonds down the center of the strand. It begins at a site called the origin of replication, and it creates a replication fork by separating the two sides of the parental DNA. This 'unzipping' of the molecules will expose the nitrogenous bases of the nucleic acid chain so that new nucleotides can be added to create the daughter strand. By the time helicase has finished its job, both strands of the parent DNA will be totally separated and each will be linked to a new strand of daughter DNA.

Design a Scientific Experiment: Example of Avery and Griffith's Experiments